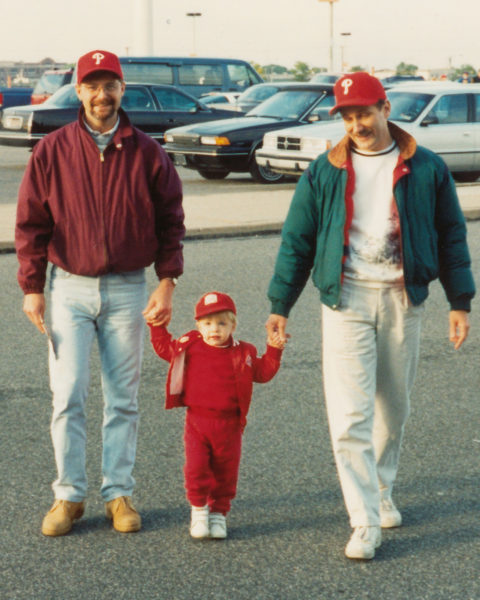 “One of the things I tell parents when I’m doing baptismal preparation is, it’s like the sponsor in an AA (Alcoholics Anonymous) context,” said the Rev. Ruth Lawson Kirk, rector of Christ Church Christiana Hundred in Wilmington, Delaware.

“You want somebody further down the road, who has more experience in this thing we call Christian faith. They’re willing to walk with you, not for you, but to be present and help you along the road,” she said during a recent telephone interview from her office.

The tradition of choosing godparents evolved with infant baptism, possibly as early as the first century. But the role is still open to interpretation.

For some, it means serving as a kind of spiritual sponsor. For others, it involves taking an active interest in another’s life and personal development. And for still others it implies a readiness to step in and serve as parents should the need arise, a practice that’s “long gone in American society,” Kirk said.

“The tradition in the Episcopal church when I was baptized was you needed two godparents of the same gender and one of the opposite gender. I have no idea where that came from but it was pretty uniform,” added Kirk, 50.

“People have asked me, how many godparents am I supposed to have, and the question I throw back is, how many people do you need to help your child’s growing up as a Christian?

“Because the truth is that a community raises a person,” she said. “You don’t have to have godparents but we hold onto this tradition because we know how important it is to do things in community and relationship. That’s a big part of being Episcopalian.”

Often family members are asked to serve as godparents, a choice Kirk avoided with her son, Matt, because “you will always have a relationship with family.”

Instead she asked Ken Garner and Bob Mikrut, who are partners and were parishioners at St. Paul’s Church in Philadelphia’s Chestnut Hill neighborhood. Kirk served there as associate rector immediately after seminary. She chose Garner and Mikrut because “I wanted someone to manifest Christian faith to (her son) Matt.”

“We were thrilled to be asked to be god-dads,” said Garner during a recent telephone interview from the Philadelphia home he and Mikrut share.

So thrilled that Mikrut was pulled over for speeding en route to the hospital shortly after the birth of Matthew Kirk, now 19, and a sophomore at Temple University, Garner’s alma mater.

“I know I can go to them,” Matthew said of his godparents during a recent telephone interview from his dormitory room. “They’re family. It’s a really close relationship.

“They are there for me. They love me and take care of me and they’ve always been here for me pretty much since day one.”

Garner and Mikrut attended Matthew’s Rite 13 ceremony and confirmation, graduations, Christmas and Easter celebrations, Halloween trick or treating, and a yearly baseball game because they are all “rabid Philadelphia Phillies fans.

“We took him to a Phillies game his first birthday. Ever since we and the entire Kirk family go to a Phillies game every year to celebrate Matt’s birthday,” said Garner, 57, director of communications and stewardship for Church of the Redeemer, Bryn Mawr.

“Right from the beginning we made the decision that we wanted to be very involved in Matt’s life as much as we could, knowing Ruth was a priest and might be moving around and we might not be in close proximity to her,” he added.

Both Garner and Mikrut, 55, said the role has been especially meaningful because they don’t have children of their own. “We’ve been together 32 years. Now, it’s much easier for gay couples to have kids. I’m grateful to Rick and Ruth to have provided a little bit of that to us by making us god-dads and being able to be involved in Matt’s life from the time he was born.

“I’m grateful to have a little hint of that while we weren’t able to do that ourselves.”

What was important to her, said Ruth Kirk, was knowing that Garner and Mikrut “live the pattern of the Christian year, supported by prayer and by the witness of a life that is also doing those things.

“For me, the primary qualification is being a faithful Christian,” she said. “You’re looking for somebody who has a relationship with Jesus Christ. Ken and Bob have been incredibly loyal and faithful Christians.” 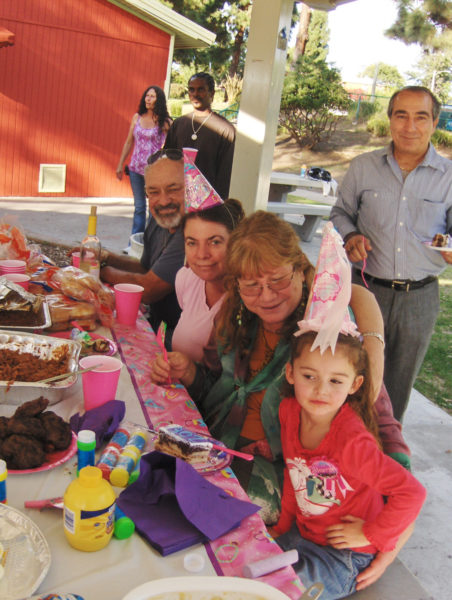 San Diego: A prayer on a chain link fence

Mindy Steers was 30 years old, pregnant, homeless and using drugs when a note near a box by a chain link fence at Ocean Beach near San Diego, California caught her eye.

“It said ‘leave a prayer,'” Steers recalled during a recent telephone interview. So, she did. She grabbed a sheet of paper from the stack provided and wrote: “Yes, I need a prayer. I need your help. I need a place to live. I’m about to have a baby.”

Someone saw her prayer and told Drusilla Grubb, who called a friend, Rhonda Muir, who knew another friend, Steve Cooper, who had room to spare. They helped move Steers into the space. A day after the move, Zoe was born.

That was five years ago and Grubb, Muir, and Cooper are among Zoe’s five godparents, a role cheerfully and joyfully accepted.

“Zoe first came to church at the children’s service on Christmas Eve at All Souls Church” when she was about three weeks old, Grubb recalled during a recent interview from her San Diego home. “Zoe, of her own accord, at three years old decided she wanted to be baptized.”

By then, they had all become a family anyway, growing and learning and struggling with each other. Introducing them to church seemed the natural thing to do, Muir said.

“I remember when she (Zoe) as a baby could barely hold her head up. We were sitting in church within the first year of her birth. It was Fat Tuesday and she was watching all the other kids play. I could see her yearning to be part of that. Why wouldn’t we help them? Here’s this baby, here’s this young woman who are somehow in our care. Of course we’re going to bring them to church.”

Grubb recalled standing at the baptismal font and promising to help raise Zoe in the church. “I care strongly that children be educated in Christianity. Faith is between you and God and it comes when it comes. But if you’re not educated, how do you know to recognize it?

“I accept the role of godparent as the church defines it,” she added. “But by then we had grown through the Holy Spirit in love with each other. We had become Grandma Grubb and Grandma Rhonda. It’s a God thing.”

After her baptism Zoe walked among the congregation with the Rev. Michael Russell, All Souls’ rector, greeting “her new family.” She continues the tradition. “She still walks with Fr. Mike as the newly baptized are greeted,” said Muir.

“Her favorite part was when Fr. Mike put the water on her head,” said Steers. “She likes getting the “cookie” during communion. We call it a cookie but it’s communion. And she likes walking with Fr. Mike to welcome the newly baptized into the church.”

Steers, 35, now has a full-time sales position, rents a home and has a car.

She said Grubb and Muir “have always been there for me. This is who I consider family. They’ve adopted Zoe and I and they’re our family. It didn’t make any sense for anyone else to be her godparents.”

Grubb, 58, and Muir, 57, agree. “We’ve talked with Mindy about this and should anything happen, we are prepared to raise Zoe.

“I don’t know how you can actually perform your duty as godparent, bringing a child into the church and bringing them up in the faith without living it for them,” Muir said. “Faith isn’t just going to church. Faith is how you carry on every day. You have to have that relationship outside anything formal to fulfill your baptismal vows.”

“People show up in your life and God gives them to you and you love them,” Grubb said. “What else is there?”

James R. Dennis credits his godchildren –and he has five of them — with bringing him back to church.

When the lawyer, Dominican novice and blogger, moved from El Paso to San Antonio, Texas in January 2004 he began attending St. Luke’s Church, Alamo Heights, after deciding “that I needed to be in church with them (his godchildren).

“I walked into the doors of the church they attended and within a few months I was teaching Sunday School,” he recalled. “Shortly thereafter I was on the vestry and now I am a Dominican novice.”

His five godchildren are from three different families; they range in age from 4 to 18 and he has been friends with all of their parents for more than two decades. Dennis credits his own godmother with teaching him the importance of great godparenting.

“I think it works as it works with God’s love itself,” he said during a recent telephone interview from his San Antonio office. “Thomas Aquinas said we love because we were first loved. We learn from the people who showed us what a godparent looks like. Mine were an aunt and a cousin but they were the people who were always in my corner and so I think it sort of works like that.

“It’s ‘what do they need’ and what can you do to meet that need, whether that’s just be a pal or somebody who helps out financially or in other ways. Most importantly, it’s somebody who is there for you when troubles come, as they do for all of us.”

It includes “keeping track of birthdays and Christmases for them … and baptismal dates. I try to send them a note on the day of their baptism. Three of them are involved in drama so I go to lots of plays. Another was involved in band. That meant I went to lots and lots of performances.”

One of his godchildren, Taylor Allam, 18, called Dennis “a fantastic godfather. He never forgets a birthday or Christmas,” she said. “He always invites us to church and to plays and other things.”

She recalls an “iconic memory” of Dennis. “When my dad was in the hospital and my mom couldn’t come and get me, he (Dennis) did,” said Allam, whose father has since passed away. “If I ever need to, I can talk to him (Dennis), about what’s going on in my life or if I need anything or if I have problems with college.”

For his part, Dennis said godfathering means “first of all that they are in my regular and daily prayer life.

“Secondly, I view it as being somebody who is their parents’ age who just thinks they’re cool.”

He continued: “All most kids want in this world is somebody who thinks they’re okay. And so you begin to understand the sacramental part of being a godparent first by understanding the emotional part of being a godparent. That it starts with a deep and abiding affection for this generally little baby. Because,” he laughed, “most of us were a whole lot easier to love when we were little babies.”

Sobering, he added: “Either you will continue to take that seriously or you won’t.”

At every baptism, “we say we’re all going to help raise this child. It seems that a spiritual commitment is also going to be involved and it can’t be stripped away from a pretty deep emotional commitment, that this is somebody I care about.”

—The Rev. Pat McCaughan is a correspondent for the Episcopal News Service. She is based in Los Angeles.