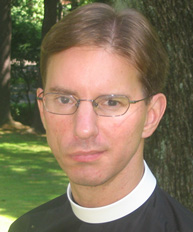 While other Episcopalians may be contemplating whether to give up chocolate or alcohol, or which spiritual discipline to take on for a solemn 40 days, Schenck is busy pondering whether Augustine or Lancelot Andrewes would match up better with Joan of Arc in a saintly sparring match.

In 2010, Schenck started Lent Madness, a saint-vs-saint online competition on his blog modeled after college basketball’s March Madness tournament. The idea caught on, and the madness has spread to include celebrity bloggers and, this year, its own website and Facebook fan page and a partnership with Forward Movement. 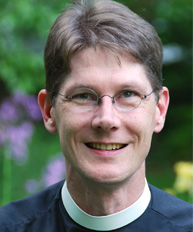 “I basically started it on a whim. I love sports, and I love Lent, so I thought: Why not combine these two?” said Schenck, rector of St. John the Evangelist Episcopal Church in Hingham, Massachusetts.

Why should basketball fans have all the fun “while we’re sitting around giving up chocolate?” he reasoned. “Lent is not all gloom and doom. What can be more joyful than a season specifically set apart to be closer to God?”

Teaming up with Forward Movement’s executive director, the Rev. Scott Gunn, Schenck has created a tournament-like single-elimination bracket of 32 diverse saints. Each day, the website will feature information about two saints in a matchup, and readers will vote for their favorite. Each round of voting will halve the competing saints, from 32 to the Round of the Saintly Sixteen, the Round of the Elate Eight, the Final Four and finally two vying for the coveted Golden Halo.

In the first round, voters receive straightforward biographical information about the saints to help them decide which to favor. At the next level, voters read “quotes and quirks” about the Saintly Sixteen. “And then we get into ‘saintly kitsch,’ which is one of my favorites,” Schenck said. “At this point, you figure that almost everybody that’s been participating has learned something about the saints and they’ve kind of figured out which ones they really identified with. Then we can have some real fun with it from there.”

Schenck’s favorite bit of kitsch? “Clare of Assisi is the patron saint of television because, when she was too ill to attend services, they appeared on the wall of her cell.”

Last year, Schenck enlisted four “celebrity bloggers” to advocate for the saints in the Final Four and Golden Halo rounds. This year, eight contributors from across the Episcopal Church will participate from the beginning, handling most of the research and writing. “I’m serving basically as coach,” Schenck said.

Gunn – who is helping with tournament technology and publicity – has embraced Lent Madness from the beginning. The first year, he lobbied hard (and successfully) for George Herbert to win the first Golden Halo, since the title of his blog, Seven Whole Days, comes from a Herbert poem found in the 1982 Hymnal. In 2011, he was an official celebrity blogger. “I tried desperately to get Thomas Beckett to win against C.S. Lewis — and I lost.”

“This year, of course, I’m staying scrupulously neutral,” he said.

So is contributor Heidi Shott, canon for communications and social justice in the Diocese of Maine — at least in the first round. “Apparently as we get closer in, we can show our true stripes,” she said. “I already have my favorites!”

She did question the wisdom of pitting two of her saints against each other in round one. “I don’t know if it’s because I’m the mother of sons, but they assigned me both Monica and Augustine of Hippo, which is just crazy — putting a mother against her son, and vice versa — so I have a great deal of passion around this.”

Her other saintly bios chronicle the accomplishments of Emma of Hawaii and Enmegahbowh, whose wife also is “remarkable,” she discovered (“More on her in the subsequent rounds” — if Enmegahbowh gets past Thomas).

Shott said she’d found the “madness” educational and fun. “It can teach us a lot about what saintliness means beyond our little hymn we sing once a year. It’s an excellent discipline, and it’s fun.”

Noted Schenck, “This is not your grandfather’s Lenten discipline, but it was a way … to make the saints come alive for people. So often we as a church kind of trap and immobilize the saints in stained glass and oil paintings and statuary. This is a way to remind everybody that these were real people.

At Forward Movement, Gunn said, “Lent Madness offers us a chance to connect with people with whom we might not otherwise connect.” And to their regular readers, he said, “it’s an opportunity to say: It’s okay to crack a smile in church. The proof of the goodness of something in church isn’t how seriously you take it. It’s actually how much it makes you grow as a person, and Lent Madness is actually a pretty fun way to do that.”

Ah, but what about wagering on the outcome?

Biblically speaking, the apostles did choose Mathias to replace Judas by drawing lots, Gunn said. “He’s arguably the patron saint of lotteries. But we as the executive committee of Lent Madness don’t condone gambling.”

“I don’t think,” Schenck said, “that anybody is getting rich off Lent Madness. I don’t believe that you can call your bookie in Las Vegas and get the line on, say, Thomas Cranmer’s chances versus Augustine’s.”

“I know a number of Canterbury Clubs [on college campuses] are participating this year, and they’re all filling out their brackets,” he added. “I don’t think anyone is actually gambling, per se, but they are competing with the caveat that if anyone is actually making any money, of course, that it will go to charity. We recommend Episcopal Relief & Development.”

Voters also are on the honor system to cast one ballot per saint, no dirty politicking allowed. “Yes, we have dead people competing, but we don’t want dead people voting,” Schenck said.