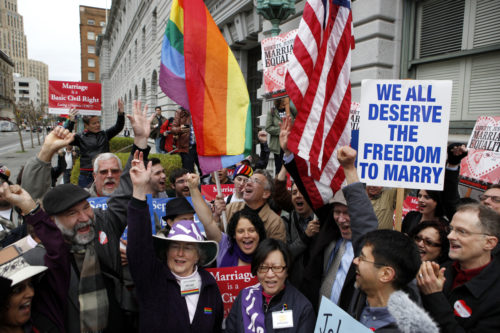 Gay marriage advocates cheer during a rally moments before hearing the news of the Proposition 8 over-ruling outside the Ninth Circuit Courthouse in San Francisco, California, on Feb. 7. Photo/REUTERS/Beck Diefenbach.

[Episcopal News Service] Gay marriage supporters rejoiced Feb. 7 after an appellate court ruled California’s controversial Proposition 8, which defined marriage as between a man and a woman, is unconstitutional.

“Today’s 9th Circuit Court decision is not just a victory for gay and lesbian couples in California – it is a victory for all Americans who believe that the ‘liberty and justice for all’ in the pledge we teach our children really means ALL,” according to an email statement from the Rev. Canon Susan Russell, a former president of Integrity USA, a group that works for full inclusion of gays, lesbians, bisexuals, and transgendered people in the Episcopal Church.

“It is also a victory over those who erroneously believe that the freedom of religion guaranteed by the First Amendment gives them freedom to write their theology on marriage — or anything else — into our Constitution,” added Russell.

She is a senior associate rector at All Saints Church in Pasadena, which on Jan. 28 celebrated its 20th anniversary of blessings same gender couples. The Rev. Canon George Regas in Jan. 1992 performed the “first known public blessing” of a same gender couple.

Shortly after California voters approved Proposition 8 by 52 percent in Nov. 2008, the Pasadena church announced that its clergy would no longer sign civil marriage certificates for any couples until the right to civil marriage is available to all couples.

“Since 1888 the Supreme Court has ruled 14 times that marriage is a basic civil right, but again and again it has been denied to loving, faithful gay or lesbian couples,” said the Rev. Dr. Caroline Hall, president of Integrity USA. “We can rejoice that in California, our right to equal treatment under the law has been upheld and our marriages are once again recognized. This will be an encouragement to all those fighting this battle in their own states.”

She and other Integrity leaders called upon the six Episcopal dioceses in California “to extend a generous pastoral response to lesbian and gay couples so that our legal rights can be celebrated in our churches and our marriages blessed by the church in the same manner afforded to our straight friends and family. This is an enormously important symbol of the Episcopal Church’s true willingness to welcome all people even those of us who are LGBT and to extend all the sacraments to all the baptized. We hope that California citizens will soon be able to marry the person they love.”

“While this is a huge victory in the battle for marriage equality, this fight is far from over,” continued the Integrity statement. “Same-sex married couples still face federal discrimination against their marriages because of the so-called Defense of Marriage Act (DOMA). Integrity vows to continue to fight for marriage equality both within and outside of the church. We will not stop until we can claim the promise that all really means ALL.”

“I was overjoyed when I heard that the right to marriage equality has been upheld by the Ninth Circuit Court of Appeals,” wrote the Rt. Rev. J. Jon Bruno, bishop of the Diocese of Los Angeles, in a statement to ENS. “The Constitution of the United States allows for equal rights under the law, and the 14th Amendment guarantees that every human being, regardless of race, ethnicity or sexual orientation, is equally protected by the constitution of our land.”

Saying that it is a “foregone conclusion” that opponents of gay marriage will appeal the decision to the U.S. Supreme Court, Bruno said he prayed for “swift action on the part of the Supreme Court that will strike down opposition to marriage equality.”

“We all are truly created in the image of God; therefore, we should all be afforded the respect and dignity of that creation,” Bruno said. “I will pray that we soon will have regained the privilege and right of marriage equality for all people.”

The Rt. Rev. Chester Talton, provisional bishop of San Joaquin (California), concurred. “I am pleased with the decision of the 9th Circuit Court of Appeals in declaring Proposition 8 unconstitutional,” he said.  “I believe that it was a divisive and discriminatory law which attempted to lessen the dignity of gay and lesbian people. I do not think that this decision lessens the significance of marriage for heterosexual people, but contributes to upholding the dignity and equality of all persons.”

Supporters of Proposition 8 have already said that they intend to appeal the ruling. A stay halting same-sex marriages remains in place as the appeals process continues.

According to a statement posted on the website of the Alliance Defense Fund, a conservative Christian legal foundation that backed Proposition 8, the group was not surprised that “this Hollywood-orchestrated attack on marriage — tried in San Francisco — turned out this way.”

But the group said it was confident the Supreme Court would uphold “the expressed will of the American people.”

Another Proposition 8 supporter, the Mormon Church, which played a significant role in passage of the measure, issued a statement saying that the church “regrets today’s decision.

“California voters have twice determined in a general election that marriage should be recognized as only between a man and a woman,” according to spokesman Scott Trotter in a statement on the church website. “We have always had that view. Courts should not alter that definition, especially when the people of California have spoken so clearly on the subject.

“We recognize that this decision represents a continuation of what has been a vigorous public debate over the rights of the people to define and protect the fundamental institution of marriage. There is no doubt that today’s ruling will intensify the debate in this country. We urge people on all sides of this issue to act in a spirit of mutual respect and civility toward those with a different opinion.”

Similarly, the Catholic Church issued a statement “denouncing” the ruling.

“Today’s court ruling is a grave injustice, ignoring the reality that marriage is the union of one man and one woman,” according to Cardinal-designate Timothy Dolan, president of the U.S. conference of Catholic Bishops.

“The Constitution of the United States most assuredly does not forbid the protection of the perennial meaning of marriage, one of the cornerstones of society. The people of California deserve better. Our nation deserves better. Marriage deserves better.”

The court’s ruling comes as the 77th General Convention of the Episcopal Church will be asked to consider approval of a three-year trial use of blessings of same gender relationships during its 77th triennial gathering July 5-12 in Indianapolis.

The Episcopal Church’s Standing Commission on Liturgy and Music has made resources available in English and Spanish in preparation for the meeting.

At its 2009 gathering in Anaheim the 76th General Convention approved Resolution C056 which says that bishops, “particularly those in dioceses within civil jurisdictions where same-gender marriage, civil unions, or domestic partnerships are legal, may provide a generous pastoral response to meet the needs of members of this church.”

The Feb. 7 ruling was only the latest round in the checkered battle for marriage equality in the state.

In 2000, state voters passed Proposition 22, which restricted marriage to a man and a woman, but the measure was ruled unconstitutional by the California Supreme Court eight years later.

The state began granting marriage licenses on June 16, 2008 but halted the practice on Nov. 5 with the passage of Proposition 8. In the meantime, an estimated 18,000 same-gender couples wed and remain legally married.

In Aug. 2010 federal judge Vaughn Walker declared the ban on gay marriage unconstitutional, but critics have said he should have disclosed that he is gay and in a longtime relationship with a man prior to issuing his ruling. Supporters of Proposition 8 say he should have been disqualified from the case, but the now-retired Walker’s successor as chief judge, James Ware, ruled in June that Walker had no duty to disclose details of his private life, and found no evidence that he had been biased.

—The Rev. Pat McCaughan is a correspondent for the Episcopal News Service. She is based in Los Angeles.