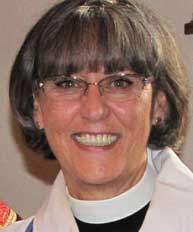 [Episcopal News Service] There is an undeclared war on women in this country and around the world.

The recent decision by the Susan G. Komen Foundation to essentially end its decades-long partnership with Planned Parenthood brought this struggle, which was played out in the Internet at head-snapping speed, to a different new battleground.

Komen’s founder and chief executive, Nancy G. Brinker, held a news conference and insisted that the organization’s decision had nothing to do with abortion or politics. Rather, she said, it resulted from improved grant-making procedures and was not intended to make a target of Planned Parenthood.

Her comments directly contradicted those of John D. Raffaelli, a Komen board member and Washington lobbyist, who reported that Komen made the changes to its grant-making process specifically to end its relationship with Planned Parenthood.

By the end of the week, Brinker apologized and said that the grants promised to Planned Parenthood – $700,000 last year, a tiny portion of its $93 million in grants to finance 19 separate programs – would be re-instated. Indeed, in the process, Planned Parenthood received over a million dollars in additional contributions – including a very public matching grant of $250,000 from New York Mayor Bloomberg – in less than 72 hours.

No one from the Komen Foundation is talking, but from the buzz on the Internet, hundreds of thousands of people – men and women – are pledging not to support the efforts of the organization that made pink ribbons an outward and visible sign of the “race for the cure” to end breast cancer.

That battle was won but the war is far from over. The reproductive rights of women are under sharp attack from the religious and political forces of the evangelical right, the Roman Catholic Church, and the Tea Party wing of the Republican Party. The battle plan is patently clear: limit women’s access to abortion, birth control, and services after rape and sexual assault by changing laws, state by state, and ensure that government funding is not delivered to any agency that supports reproductive rights in any way.  Do this with a ballot in one hand and a Bible in the other. And when you don’t get what you want, cry “religious intolerance.”

On another front, human trafficking is a mega-billion dollar global industry unregulated by any country or international body. It is a criminal activity ignored and/or tolerated with devastating consequences for the person involved. Trafficking ranks just behind drug and arms trading as the most lucrative forms of commerce. It is no surprise that the vast majority of trafficked persons are women and children. Nor is it any shock that most of those who do the trafficking are men.

The violence continues unabated. A report released in late December 2011 by the Centers for Disease Control and Prevention states that one in four women in the United States suffers “severe physical violence,” and one in five is raped at some time in their life. Millions of women are suffering serious violence quietly at any time.

According to another CDC survey, four women die because of domestic violence every day in the United States of America. For every woman who dies, hundreds keep suffering without any recourse, without any letup in violence. They remain alive, but are not “living” by any dignified definition of the word.

These are just some of the battles of this war. There are many, many others, including employment, education, immigration, access to affordable health care options, health insurance, the military and yes, the church,

As national convener of the Episcopal Women’s Caucus, I receive calls and e-mails from women – ordained and members of the laity – who tell horrific stories of unfair employment practices, which include discrimination in salaries as well as hiring, firing, insurance and pension benefits. These may not show up in the statistics of the church, but the anecdotal evidence is overwhelming.

The recent battle between Komen vs. Planned Parenthood gives us many insights on how women and men of quality can fight back for equality. The fatal flaw in the Komen battle plan was to consider Planned Parenthood just another organization. It is not. It is what it always has been: a movement. Organizations are fine. Movements are better.

Social media played a critically important role in this battle. Women can mobilize without the cost of meetings and gatherings and travel expenses or salaries for executives and staff. It is relational but not incarnational, so it does have its drawbacks, but it remains a highly effective way to have our voices heard about what happens to our bodies.

“The personal is political.” That was the battle cry of the early feminist movement. It has never been more true than today. It is also deeply spiritual. Women of faith must begin to use the tools offered to us in the post-modern world to fight a battle that in many ways is as old as the Garden of Eden.  With a modicum of organization, we can become a movement that is a force to be reckoned with.

So, pick up your smart phones, ladies, and take up your fax machines, turn on your laptops and fire up the Internet. Let’s tweet, text, IM, Facebook, fax, phone and e-mail our way to justice and equality.

There is an undeclared war on women in this country and around the world.

— The Rev. Elizabeth Kaeton is an Episcopal priest in the Diocese of Newark and the national convener of the Episcopal Women’s Caucus. She was recently elected to a three-year-term on the national board of the Religious Coalition for Reproductive Rights.