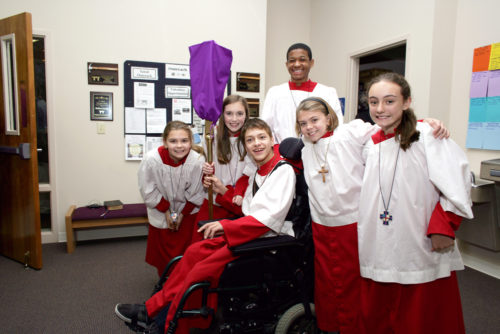 [Episcopal Diocese of Atlanta] Victor Catanzaro can’t see, and he can’t walk. And he doesn’t have a lot of strength in his upper body. But he can serve as an acolyte in an Episcopal church.

How can this be? Well, it takes a parish.

About three years ago, Betsy Jones, who serves as acolyte master at St. Aidan’s, Milton, approached Rector Rob Wood with a question. She already was used to the demanding role in which she supervises 65 acolytes who serve liturgically at the Alpharetta-area church on Cogburn Road. What’s one more challenge? “Do you think it would be possible for Victor to join the acolyte corps?” she asked Wood.

Acolytes at St. Aidan’s usually spend their first year as serving as torch bearers, observing what the more experienced acolytes are asked to do: carry the cross, banners and alms basins, assist at the altar, and other tasks. Victor’s four sisters already were on the team.

“Rob sat quietly, thinking it over,” recalled Jones. “Then he said, ‘Sure,’ and with a twinkle in his eye added, ‘But he can’t carry a torch!'”

It was determined that Victor’s primary roles would be to carry the cross in procession and receive the alms basins at the offertory. The challenge was to come up with a method for attaching the cross to his wheelchair; after some intense web surfing, none was found. Then a parishioner came up with a plan to insert a holder for the bottom of the cross in the center of a piece of wood that would fit under the arms of Victor’s wheelchair. Another acolyte, who came to be known as “Victor’s buddy,” could push the wheelchair from behind with one hand and use the other hand to steady the cross.

When Victor was on the rota to serve, members of the acolyte team took turns being his buddy. “But one Sunday, a relatively new acolyte named Patrick was serving with Victor and came up after the service to find out if he could be Victor’s buddy the next time he served. In fact, he said, he wanted to know if he could be Victor’s permanent buddy. ‘No problem,’ I said. ‘You’ve got the job!”

Victor is not the only acolyte with special needs. St. Aidan’s expansive welcome extends to children who have been diagnosed with ADHD, there’s one on the Asperger’s spectrum and another with muscular dystrophy. “We make accommodations for all of them so they can fully participate,” Jones said.

One Sunday recently when Victor and Patrick were serving, it was time for Victor to receive the sacraments. Patrick had been told that part of his job was to guide Victor’s hand to receive the bread. The chalice bearer would guide the cup to Victor’s lips. This time, however, the chalice bearer couldn’t reach over the altar. “So Patrick took the cup,” said Jones, “and without a second though gave it to Victor, saying softly, ‘The blood of Christ, the cup of salvation.”

“Afterthat, there wasn’t a dry eye in the first three rows,” Jones said. “Like I said, we’ve got some really special kids in our acolyte ministry.”

— Nan Ross is director of communication for the Diocese of Atlanta. This article first appeared in the Winter 2012 edition of Pathways Journal.