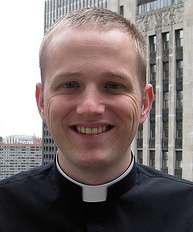 [Episcopal News Service] Jonathan Myrick Daniels was a 26-year-old seminarian when he heard the televised appeal of Martin Luther King Jr. for students and clergy to join the struggle for civil rights.

Inspired by the words of the Magnificat about the God who “hath put down the mighty from their seat and hath exalted the humble and meek,” he knew he had to travel to Selma. Once in Alabama, he took up the work of building the kingdom of God: integrating local Episcopal churches, registering African-American voters, tutoring children, and galvanizing relief agencies.

After being released from jail for joining a picket line, Daniels was shot and killed while pushing an African-American teenage girl, Ruby Sales, out of harm’s way.

Although Daniels is recognized as a martyr of the Civil Rights Movement, few people know that he spent time ministering in South Providence, Rhode Island, before traveling south.

Sheila Conway, who grew up in the Roger Williams Public Housing complex and attended Christ Church on the lower South Side, got to know Daniels when he worked at Church House, which offered programming for neighborhood youth. Conway vividly remembers the last time she saw Daniels.

“Daniels was in town to say goodbye to friends and my family could not attend the gathering because a family member was ill. He made a point of stopping by our apartment to pray for healing,” she recalled. “There was such a sense of calm.” In August of 1965, a college student involved with Church House knocked on the door to personally tell them that Daniels had been killed.

Participants in Episcopal Service Corps communities live intentionally in Christian community, work alongside service agencies embedded in local communities, and engage in vocational and spiritual discernment for a period of  nine to 11 months. They receive a modest stipend to cover living expenses as well as health insurance, and are supported by a program director and mentors.

The idea of Jonathan Daniels House is the fruit of a yearlong study conducted by the South Providence Task Force. The Task Force considered how the Episcopal Church could maintain an active presence in South Providence following the closure of Church of the Epiphany there in 2009.

As the Task Force considered how vital ministry of the Episcopal Church might emerge from the needs and hopes of communities in South Providence, including ways the diocese might partner with existing organizations there, the possibilities for collaboration crystallized around the idea of planting a residential service community for young adults.

As members of the task force shared with Diocesan Council in June, a community like Jonathan Daniels House would have a wide-reaching impact in South Providence, forming diverse new communities of people, and expanding the reach of existing organizations and programs. Such a community would also have a significant impact on the life of the diocese, nourishing a regular young adult presence, galvanizing parishes and diocesan organizations to become involved, and connecting the diocese to the wider church in service.

“We can think of no better way to continue the work of justice and reconciliation for which Daniels lived and died,” they said.

—The Rev. Edmund Harris is assistant to the rector of Church of the Epiphany in Rumford, Rhode Island.