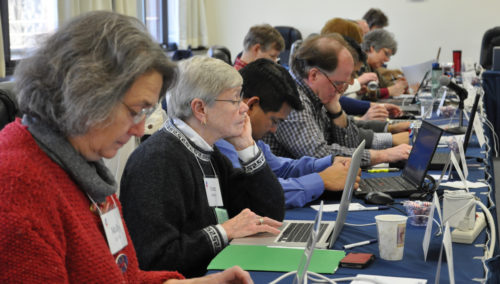 Some of the members of the Episcopal Church's Joint Standing Committee on Program, Budget and Finance consult an online version of the proposed draft 2013-2015 budget during their Jan. 30-Feb. 2 meeting in Maryland. Photo/Mary Frances Schjonberg

The budget committee met Jan. 30-Feb. 2 at the Maritime Institute’s Conference Center to receive a proposed draft 2013-2015 triennial budget which it will eventually present to the 77th General Convention for its approval this summer in Indianapolis, Indiana. The meeting convened the day after the Executive Council approved the draft version of a balanced $104.9 million 2013-2015 budget and passed it to PB&F.

One tension PB&F members discussed centered on responding to the financial challenges faced by dioceses while deciding how much money needs to be spent in support of the denomination-wide mission, ministry and infrastructure of the Episcopal Church.

Another tension concerned paying for the costs of the church’s mission and current structure knowing that there have been many proposals to change that structure and, possibly, redefine the direction and focus of the mission and ministry. 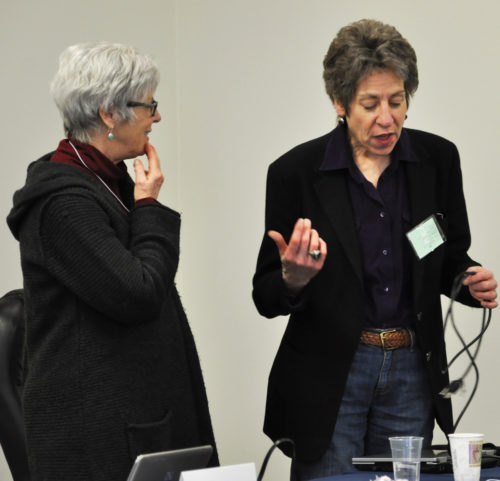 The 2010-2012 budget was $23 million lower than the previous triennium’s and has caused the beginnings of a change in how the denomination’s churchwide staff does its work. That budget assumed that some work being done by churchwide staff could be better done at the diocesan and congregational levels. The churchwide staff has been moving toward helping to network the church’s expertise at all levels, and making its own skills available to those networks and other organizations, rather than developing and implementing programs itself.

That change, which the 2013-2015 draft budget proposes to continue and increase, brought with it another tension that PB&F discussed: the question of whether leaving more money in dioceses and congregations will in fact result in more mission and outreach work, or whether it will be used as overall budget relief.

Committee member Susannah Perkinson suggested that reducing the amount of money in the budget “involves us trusting congregations and dioceses use the money well if it stays there and perhaps [to] educate [them about the intention] so that they do use it well.”

Yet another tension PB&F wrestled with was whether or how the budget ought to be the mechanism for making those changes.

PB&F Chair Diane Pollard told the committee “we’re caught between the current process and the desire of many to change that process, and I don’t know that it’s the job of this committee to change the process.”

Co-Chair Diocese of Maine Bishop Steve Lane said he was “a voice against cutting the budget because I think we’re cutting blind without this other conversation – one cut is as good as another and there’s no way to decide what moves us further than any other because we don’t know where we’re going.”

In the end, PB&F agreed to have Lane and Pollard create a work group of committee members to collect information about the various structural change proposals that have recently been discussed. General Convention Secretary Gregory Straub suggested that the group also gather information about such attempts that have been made in the past.

“It doesn’t necessarily mean that we will drive all of this but we can have this in front of us and perhaps in the crafting of the budget be supportive of what movements we see developing,” Lane said of the exercise.

The draft budget is due to be posted here soon, according to Treasurer Kurt Barnes. He told PB&F that he and his colleagues need time to adjust the document to reflect accurately a number of changes council made to it during the last afternoon of its meeting. When it is posted, the document will include a letter from council explaining the rationale it used to craft the budget.

Council had assigned its Executive Committee to design and manage the budget development process, and on Jan. 27 that committee gave council two budget scenarios. One called for asking dioceses to contribute the 19 percent of their income and the other was based on income if dioceses contributed 15 percent. The difference in income was about $13.5 million.

Council crafted the final draft version of the 2013-2015 budget by assuming the 19 percent asking and the spending outlined in the 15 percent version. To that spending scenario, council members then ranked their priorities for restoring parts of the budget. Those priorities included investing in emerging networks and supporting existing ones, empowering local ministry and communications.

“This is a draft budget and nothing is sacrosanct,” Pollard told the PB&F group early in its meeting. “What is sacrosanct is that we can’t change it between now and General Convention.”

What PB&F can do is learn about how the draft budget was crafted and get more details about the work it funds, and it set up a mechanism to do that, including interviewing some members of the churchwide staff. Straub told the committee that it can also consider and file resolutions before convention begins in order to have them considered early in the schedule, if needed.

Once at convention, PB&F will convene an open hearing on July 4 (the day before convention’s official start) from 12:30 p.m. to 1:30 p.m. to discuss the framework of the 2013-2015 budget and to take testimony on a resolution that will ask convention to reaffirm action taken at the last triennial gathering (via Resolution D027) to have the 2013-2015 budget centered on what it called the “strategic priorities” of the Anglican Communion’s Five Marks in Mission.

PB&F also is scheduled to hold two other hearings at convention, one on spending decisions the evening of July 6 and revenue decisions on July 7, also in the evening. All three hearings will likely involve small-group discussions moderated by PB&F members as well as time for individual testimony.

The committee also plans to set up a moderated website or blog to receive comments about its work from the entire church.

Outside of those hearings, the committee will meet daily to work on a budget to propose to convention. As part of that process the members must propose a funding formula that includes determining what percentage of operating income to ask dioceses to contribute. In addition to considering and possibly changing the spending plan contained in council’s proposed draft budget, the committee must also consider all resolutions passed by the convention which have spending implications.

The committee is scheduled to present its proposed budget no later than 2:15 p.m. on July 10 to a joint session of the House of Bishops and the House of Deputies in the deputies’ hall. A vote in each house is set for July 12, the last day of convention. The budget takes effect Jan. 1, 2013.