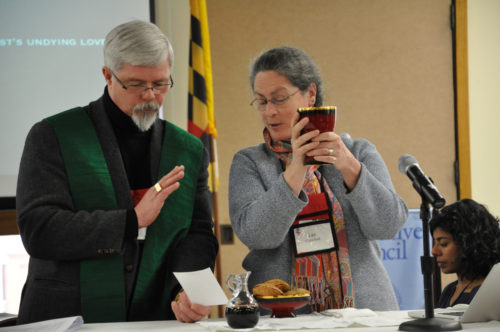 Diocese of British Columbia Bishop James Cowan, Anglican Church of Canada liaison to the Episcopal Church's Executive Council, and the Rev. Lee Allison Crawford, council member, concelebrate Eucharist Jan. 29 on the closing day of council's meeting in Linthicum Heights, Maryland. Crawford was celebrating the 18th anniversary of her ordination. In the background, the Rev. Winnie Varghese, another council member, monitors the projection of the order of service for the entire council. Photo/Mary Frances Schjonberg

[Episcopal News Service – Linthicum Heights, Maryland] The Episcopal Church’s Executive Council Jan. 29 approved a 2013-2015 draft budget that includes money meant to “open the door to doing long-term reform of how we do business as the church.”

Executive Council spent the majority of its Jan. 27-29 meeting here at the Conference Center at the Maritime Institute discussing the draft budget, alternating between discussing big-picture issues and negotiating specific line items. It also passed what Presiding Bishop Katharine Jefferts Schori called a “highly significant” resolution expressing solidarity with the people of the Republic of South Sudan.

The draft budget represents $104.9 million in income from dioceses and investments plus other sources such as facilities rental, and an equal amount of expenses. It does not include the church’s refugee resettlement work, which is performed under government grants, according to Treasurer Kurt Barnes.

He said the draft budget is due to be posted here in the next few days.

The budget, which will not be final until General Convention acts in July, proposes to set aside money for a “churchwide consultation” on the Episcopal Church’s future shape and work. It also includes money for pilot projects that Chief Operating Officer Stacy Sauls said could show how the church’s purchasing and organizational power could help congregations and dioceses free up more of their resources for mission work.

Sauls characterized such a cooperative arrangement as one way to bring about “long-term significant change” in how the churchwide staff relates to the rest of the church. Council accepted his proposal and his suggestion that the 2013-2015 budget “should open the door to doing long-term reform of how we do business as a church.”

Jefferts Schori told the council in her closing remarks that “we have begun to look at a restructuring of this church for God’s mission. It is the beginning of a process that is only one stage in what the reformers call ‘the church always in reformation.'”

She also suggested that council view the staff employed at the Church Center in New York and elsewhere across the church as “a churchwide staff who are meant to be dispersed in service – sent across the church, spread out to help network Episcopalians in service to God’s mission.”

“We don’t have a ‘church center’ except in Jesus,” she said.

House of Deputies President Bonnie Anderson said in her closing remarks that she was grateful for what she called “glimmers” of change reflected in the choices council made in the budget. However, she said that she is “concerned that the categories within the budget perpetuate the church’s continued reliance on an executive, staff-driven church. This model isn’t working for us, and it runs counter to the flexible networks that are being developed and embraced at other levels of the church and in the world.”

Noting that the draft budget includes more than $7.7 million to maintain the Church Center and service its debt, Anderson said “if we continue to spend this kind of money on a building to house an executive structure, the only place we’ll be able to look for savings will be in areas that compromise the voices and leadership of clergy and laypeople in the church. That’s not faithful to our tradition as Episcopalians or to who I believe God is calling us to be.”

In its letter to the church, council members said they were challenged in their budget work to “to seek a way to take on the adaptive challenges facing all denominations in a post-Christian era of declining interest in the institutional church.”

Council members said their budget discussion Jan. 29 reiterated their “concern that the budget would reflect the vision and mission of the church, that it spring from a theology of abundance and bear the Five Marks of Mission.”

“The discussion also reflected a real appreciation and desire to engage our internal and external partners affected by the budget,” council’s letter said. “This appreciation is tempered by the understanding that the process does not always give us time to have those conversations. And so we live in that tension. The discussion also made clear that Council knows a budget is a living document. We trust the staff to work out the details and nuances of making it a real instrument for renewal of our life in the church.”

The council was required by canon to present a draft triennial budget to the church’s Joint Standing Committee on Program, Budget and Finance (PB&F) by the close of this meeting.

Council said it “took a greater part in the development of this budget this triennium because it understood that in a time when business as usual no longer served the church in its response to God’s mission, then budget driven by renewed vision is required. Council determined to take its part in building toward new vision of the tasks before us. The effort changed Council itself, shaping it to work in new ways.”

Program, Budget and Finance will begin to study the 2013-2015 draft when meets at the Maritime Institute Jan. 30-Feb. 2. The committee will eventually develop the triennial budget to propose to General Convention on July 10. The 2013-2015 budget will not be final until General Convention approves it, a vote now scheduled for July 12. The budget takes effect January 1, 2013.

Council had assigned its Executive Committee to design and manage the budget process by which the council developed a draft 2013-2015 budget. That process included soliciting input from across the church on what the church’s funding priorities ought to be and engaging in financial modeling.

On Jan. 27, Executive Committee gave council two budget scenarios. One called for asking dioceses to contribute the 19 percent of their income and the other was based on dioceses contributing 15 percent. The different in income was about $13.5 million.

The draft 2013-2015 budget features a decrease in income from the current triennium, which was based on $141,271,984. The difference is due in part to the fact that the General Convention reduced the amount of money the church’s 110 dioceses were asked to contribute to the cost of funding the denomination’s work. The amount went from 21 percent of diocesan income in 2010 to 20 percent in 2011 and 19 percent in 2012.

Council crafted the final draft version of the 2013-2015 budget by assuming the 19 percent asking and the spending outlined in the 15 percent version. To that spending scenario, council members then ranked their priorities for restoring parts of the budget to the 19 percent levels. Those priorities include investing in emerging networks and supporting existing ones, empowering local ministry and communications.

In other council action, Jefferts Schori also praised the members for passing the Sudan resolution, which rejoiced in the establishment of the independent state of the Republic of South Sudan, while deploring “the great human tragedy” still occurring in Abyei, Blue Nile State, and Southern Kordofan State. It reaffirmed solidarity with the Episcopal Church of Sudan, noting that the church there had stood with all the Sudanese even as it has been “targeted for violence and abuse.” The council reminded and urged all Episcopalians to continue in prayer and advocacy for all the people of Sudan and called upon the U.S. government “to renew and continue its economic sanctions and diplomatic efforts urgently to secure peace and an end to the egregious human rights violations and ongoing military brutality against the people in all areas of the Sudan.”

The Presiding Bishop said passing the resolution “did not involve sending money, it involved expressing solidarity and support for other Anglicans in another region of the world. It got us beyond ourselves.”

A summary of all the resolutions passed by council at the meeting is here.

The Executive Council carries out the programs and policies adopted by the General Convention, according to Canon I.4 (1)(a). The council is composed of 38 members, 20 of whom (four bishops, four priests or deacons and 12 lay people) are elected by General Convention and 18 (one clergy and one lay) by provincial synods for six-year terms, plus the presiding bishop and the president of the House of Deputies.