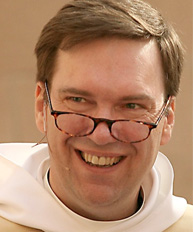 [Episcopal News Service] Last month news accounts were breathlessly reporting that physicists were ready to announce that they’d discovered, at long last, the Higgs Boson – the so-called “God Particle.” The news, when it came out, was much less exciting than the earlier reports seemed to indicate. There was no discovery. There was instead essentially just an announcement that there was one last drawer to open to find the particle. And that the drawer would be opened sometime this coming year.

The Higgs particle’s existence is predicted by the Standard Model of Particle Physics. It’s a very successful model at explaining the odd, counter-intuitive world of elementary particles. It has a lot of confirmed predictions to its credit. But there’s one missing piece, the Higgs boson, a keystone that needs to exist but has not yet been confirmed. The Higgs particle is a boson, a class of particles that connects the forces of the world to their expressions. In essence, the Higgs is the particle whose existence explains why some elementary particles have masses and some don’t. It was nicknamed the “God particle” by an author who wrote a popularized explanation of the theory. Physicists don’t really like the term. Nor does this particular priest.

If scientists do, in fact, confirm the existence of the Higgs particle later this year, it will be a major triumph of the Standard Model. It will mean that we have effectively discovered a way to view almost all the major forces of Nature (electricity, magnetism and the weak and strong nuclear forces) as different manifestations of one underlying phenomenon. (Gravity still stubbornly refuses to be folded into the structure.) The confirmation will be the capstone of a more than a century’s worth of work.

But if the Higgs particle isn’t in that last drawer — well, then things will get very interesting. Because the Standard Model works very well. But it will be shown to be wrong. And when science is wrong, it gets very exciting. Because it means that physicists will all have to go back to the beginning, figure out where they went wrong, and look to see where they might fix up a new view of reality.

This happens with some regularity in Physics. It happened in the time of Copernicus and Kepler. It happened when Einstein showed the errors with Newton’s model. It happened as Bohr et al showed errors with both Einstein and Newton. If it happens again, well and good! More Nobel prizes to be won! (Scientists like winning prizes.)

The possibility that the Higgs won’t be found is worth reflecting on. Because the furor that would result shows the difference between the scientific method and religious practice. Science is always striving to find new and more successful ways to view the world. And when something is wrong, it means that whole existing edifice is supposed to be tossed aside and a new one created. Woe to any philosophy or theology that depends on the structures being discarded.

Christianity, on the other hand, starts with a story to which we have a responsibility to conform our lives; the story of God’s creation and love of Creation, our role within that Creation and the unique expression of God’s will for us in the person of Jesus. Rather than overturning the story and starting over again, we draw close to the story and discover new facets and ways to apply a universal and timeless truth to our lives. Science changes the account to fit the present observations.

The two enterprises are often seen as being in conflict. But they’re not really. They are using different methodologies to draw as close as possible to Truth. In my mind they’ve always been complementary to each other, best used in conversation with one another.

So keep that in mind when the results of the search for the Higgs Particle are announced. If it’s found – yay. If it’s not found – then YAY! Either way, the scientific endeavor will continue to try to hunt the truth, no matter how elusive. And faith will continue to seek enlightenment by its contemplation of the truth already delivered.

—The Very Rev. W. Nicholas Knisely is dean of Trinity Cathedral, Phoenix, Arizona. He holds degrees in physics and astronomy from Franklin and Marshall College and the University of Delaware, in addition to a master of divinity degree from Berkeley Divinity School at Yale. This commentary first appeared on the website of the Diocese of Arizona.