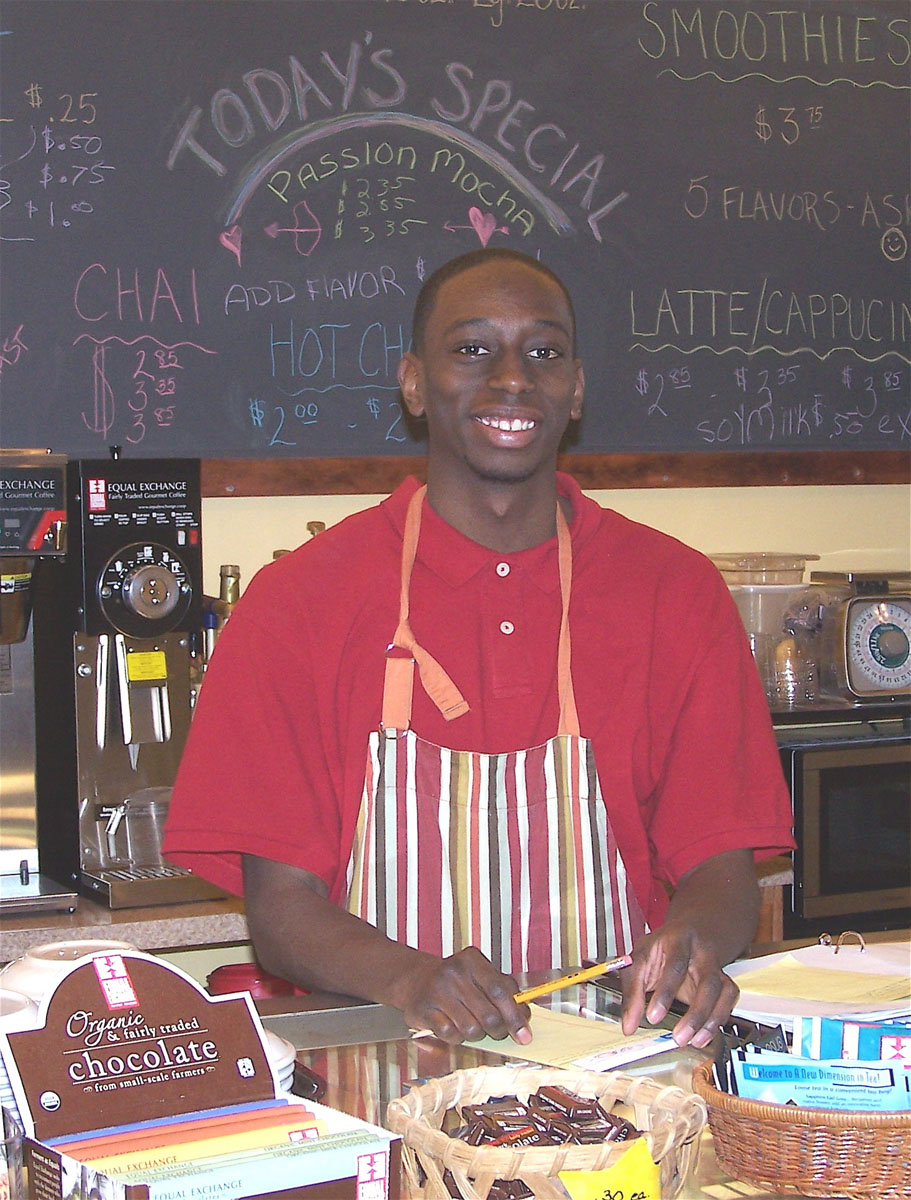 [Episcopal News Service] Three years ago Martice Scales, 24, a boxer, musician and unemployed ex-felon in Racine, Wisconsin, had no job prospects and even less hope.

Then a former teacher referred him to the Racine Vocational Ministry (RVM), an outreach of St. Luke’s Episcopal Church and other local agencies and Scales has been on the fast track ever since.

“I started out as a late night barista,” he recalled. “Within a few months, I was full-time barista and then I got supervisory positions. I could tell they were grooming me for leadership; they were giving me more and more opportunities,” he said during a Jan. 19 telephone interview from Racine.

He doubts any of it would have happened without RVM’s employment readiness and life skills classes. Courses “like financial management and how to deal with supervisors and how to interview and punctuality and dressing appropriately. They made me employment-ready,” he said.

Jim Schatzman, RVM’s executive director, was a member of St. Luke’s outreach committee when the group was looking for a way to engage the community, he said during a recent interview from his Racine office.

“Racine has led our state in unemployment for about 12 consecutive years, it’s a tough rust belt story,” he said. “We’ve lost more than 6,000 manufacturing jobs in the last seven or eight years.”

So, assisting job-seekers seemed as good a place as any to start. The center opened its doors in 2002 and “we just placed the 2,000th employee, at an average of 200 people a year, in a relatively small community of about 89,000,” he said. “We feel we’re making a family and a community impact.”

Being the church makes a difference, especially for those who might mistrust government institutions, Schatzman said. “It also makes a difference in the way we welcome them when they get here, that somebody knows their name. They’re not the anonymous, faceless homeless anymore.”

Scales agreed. “They helped me realize I was worth the effort they were making to help me. They also helped me forgive myself for doing stuff to be incarcerated. There’s very little you can say about yourself right after incarceration that makes you feel good,” he said.

“Without them, I doubt I could ever have gotten my foot in the door. I’d still be struggling to even find temporary work. I don’t think employment is their specialty, people are their specialty.”

RVM is just one example of the way Episcopal congregations around the country have begun responding to the needs of those affected by the tough economic times. They offer a range of free services, from resume review, career counseling and job-readiness training with a little bit of spiritual direction thrown in, for good measure.

About a year ago, Van Buren, a vocational deacon at St. John’s Episcopal Church in LaVerne, along with a parishioner, Vashti Major-Bliss, launched the Career Crossroads Ministry.

The ministry has been meeting the first and third Sundays of each month, offering support, a meal, workshops, guest speakers, materials, training, concrete job openings and a spiritual dimension for those seeking employment, Van Buren said during a Jan. 22 interview. It boasts a 54 percent placement rate, assisting about 30 jobseekers thus far, and is expanding to include other congregations, as well as other communities, he said.

For Gina Hosterman of Pomona, a Jan. 22 resume review with Van Buren and Major-Bliss felt like new hope.

Although she has three years experience as a customer service representative, Hosterman, 24, like many in the work force, has been underemployed. She’d also seen three career counselors in eight months, to no avail. Currently she is employed on-call, demonstrating food products at local grocery stores—work neither satisfying nor steady, she said.

“I’m not even going to be called in to work for the next month,” she said. “I just want full-time or part-time work. I have no preference for whatever field, I’ve lost my motivation and I’m having trouble setting goals for myself,” she told Van Buren and Major- Bliss.

Part of the challenge is learning to develop self-assessment skills and to convey one’s gifts and talents successfully, “to give the traditional elevator or you in two speech—branding yourself in two minutes,” said Major-Bliss. “That’s the question everybody asks, ‘tell me about yourself.’ You want to be able to do that in a clear and concise manner.”

Their hour-long meeting with Hosterman began and ended with prayer. Their resume review yielded possibilities for specific “and exciting” careers—like in marketing and graphic art—that Hosterman had overlooked. It also resulted in “homework—to conduct some informational interviews with professionals in those areas” before a follow-up session next month.

“I don’t know what to say,” Hosterman said. “For the first time in a long time, I feel hopeful.”

Utley, and another St. Timothy’s parishioner, Dick Yarp, both retired business professionals, created the Employment Assistance Ministry (EAM) three years ago and began offering “resume upgrades.” Initially, the ministry was intended to assist people within the congregation, but quickly they expanded it to others outside the church, he said during a Jan. 20 telephone interview from his home.

But the first step to a successful job search is to scrutinize resumes because “a great job begins with a great resume,” he said. “Without one, networking is difficult.” To date, EAM has served about 44 job-seekers; 30 percent have found employment.

For instance, EAM assisted a woman who was laid-off from an administrative assistant position in reworking her resume to focus on specific gifts. With the new resume, and coaching in interview and other skills through CAM, she was hired at a venture capital firm.

“I thought initially that we’d appeal mostly to middle managers,” Utley said. “But we seem to have helped mostly women, from a variety of backgrounds. We’ve had people with master degrees and one person with a Ph.D. who came to see us, and we worked with them in terms of getting their resume shaped up, just like anybody else.”

Being church offers a definite spiritual component to the counseling services. So did facing their own experiences of unemployment, said Van Buren and Major-Bliss, at St. John’s in LaVerne.

Two years ago, Van Buren found himself unemployed after 16 years with ITT Educational Services, Inc. He discovered a desire to help others navigate the job market, he said. He is now employed at the San Joaquin Valley Community College but considers Crossroads Career Ministry (CCM) a special calling.

Major-Bliss, a former director in a pharmaceutical company, just accepted a severance package on Jan. 18, she said. Sudden unemployment includes both challenges and opportunities, she said. “I’m on my own discernment path. Now that I’ve gotten past the initial feeling of not being valued, next is what am I going to do about this?”

Similarly, after librarian Jennifer Dye was laid off from the Detroit Public Library in March, she decided to turn adversity into opportunity—and to spread it around.

“As I librarian I really like helping people, I’m good at research, and this seemed to be something I could do to help others,” Dye said during a recent telephone interview from her home.

CCN has only had one meeting so far but already Dye has employed her extensive research skills to assist participants in expanding contacts through such social media networks as LinkedIn.

She also lined up participants with a speed-networking event loosely patterned after speed dating “although some people don’t exactly like that comparison,” she chuckled.

“It’s a chance to meet a lot of other people, to learn a little about them, have them learn about you, and to build a network for yourself.” The theory is that the more you expand your personal network of contacts, the more opportunities you create for yourself to connect with employers and opportunities, she said.

CCN is a free service available to anyone interested as she “works my way through unemployment,” Dye said. She is going on job interviews “but this isn’t something I’m just going to do until I get another job. This ministry will be ongoing as long as necessary. I’m trying to position myself so that I can take advantage of opportunities that come up.”

For Endel Williams, 37, the Racine Vocational Ministry did just that—created opportunities. He jumped at them all.

“I got out of prison in 2001 and started working a temporary services job not making much money. But, I just couldn’t move up. If I was still there today, I’d be making the same amount of money. Then I heard about RVM, and the rest is history,” he said.

That was right after RVM began in 2002, he recalled.

“We connected,” Williams said during a Jan. 20 telephone interview. Through RVM’s efforts, he has been employed with the city of Racine’s water utility company for the past five years, repairing broken water mains, and “it’s excellent,” he said.

He also keeps in touch with RVM. “I’m still involved with RVM. I served on their board, and I’m on the executive committee. I’m there a couple times a week,” he said.

“They don’t care if you’re black, white, Hispanic, Asian, if you come through their door and say you want help, you’re gonna get some help,” he said. “They don’t make money off you. They sit down, talk to you, explain things to you. Whatever I’ve needed in terms of help, advice, anything, they’ve been there.

“But,” he added, “they didn’t give me anything. When I first started going there, they saw I was sincere. They supplied the opportunities and I took advantage of them.”