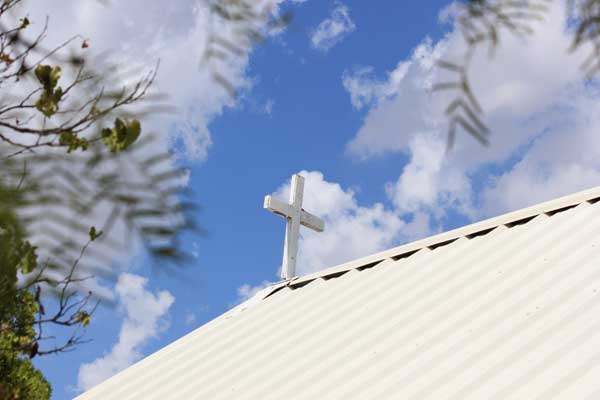 [The Church News] It’s Sunday afternoon at the farthest reach of the Diocese of West Texas. Under cotton puff clouds floating lazily in a sparkling blue sky, a handful of parishioners arrive for services at St. James Episcopal Church.

You wonder where they’re coming from. Except for the stone footprint of an old frontier fort, the horizon is unencumbered by any signs of human habitation. The scene is virtually unchanged from what the first ranchers, settlers and soldiers saw 150 years ago.

But arrive they do at their small rock church with a white cross on top, from isolated pockets across the empty landscape, in vans, SUVs and pickup trucks, some caked in caliche dust. There are no sedans or small imports.

The vicar, the Rev. Christopher Roque, arrives with wife Tish and their two children, Matthew and Ethan. They chat briefly with church members congregating at the front door before heading inside for the 3 p.m. Communion service. 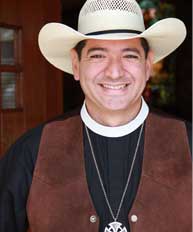 He’s wearing a white straw Stetson, leather vest, Levis cinched up with a big silver belt buckle with a Texas star in the middle, tall leather boots, a beautiful silver crucifix and a clerical collar. From a tooled leather briefcase he dispenses today’s scripture readings.

There is no procession or music. Roque walks to the front of the church and starts Rite II.  With his sermon, the entire service is over in 45 minutes.

Afterward, Roque is almost apologetic that there were only 9 in attendance today.

No need to apologize, Father. This is a story about the smallest parish in the diocese.

St. James sits in the crossroads town of Fort McKavett, population 4, some 170 miles west of San Antonio. Besides St. James, the tiny hamlet consists of a post office, fire station and the Fort McKavett State Historical Site.  It’s so remote that you have to drive to Sonora, 41 miles south, for a loaf of bread or tank of gasoline. 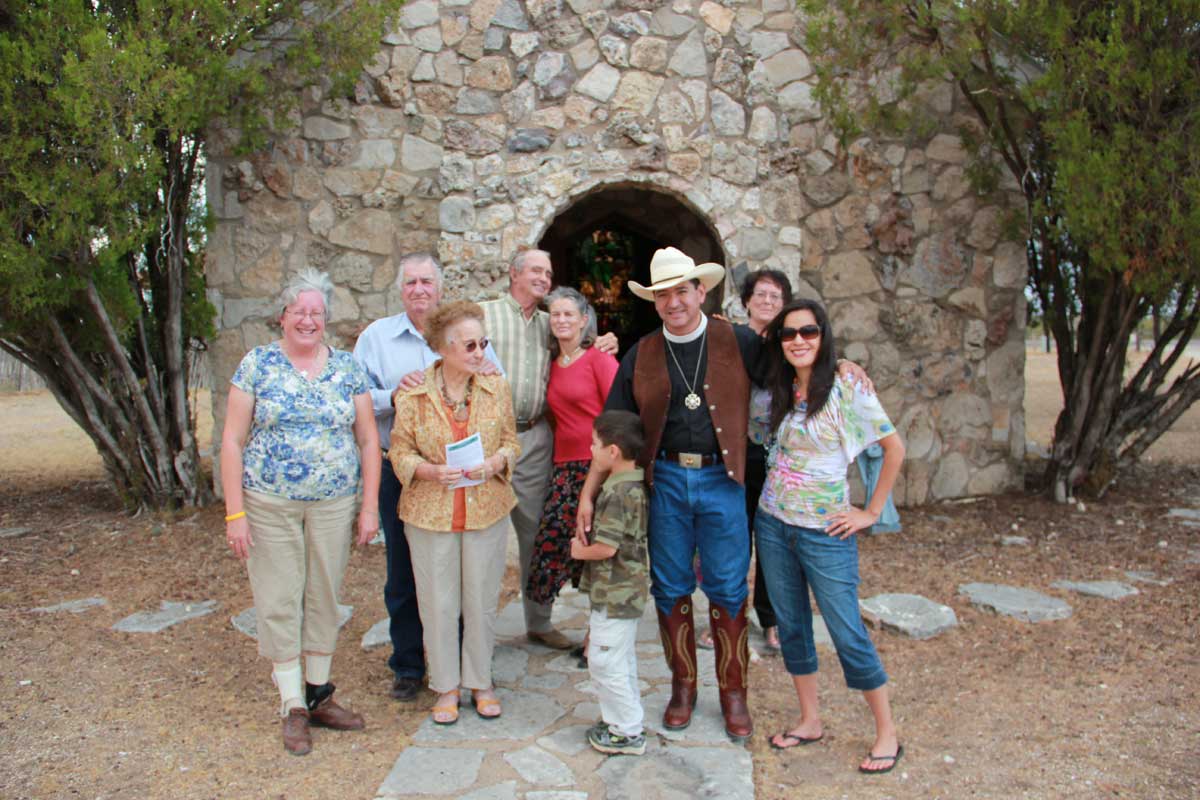 Church members gather outside after services on a recent Sunday. PHOTO/ Mike Patterson

On Sundays, “Father Chris” as he’s affectionately known to his parishioners, conducts services at St. John’s Episcopal Church in Sonora in the morning, and then treks up to Fort McKavett twice a month for the 3 p.m. Communion at St. James.

“If called to Sonora as rector, it’s conditional that you are vicar at St. James,” Roque said.  “The diocese kind of yokes the two churches together.”

St. James probably would never have existed if it hadn’t been for the presence of Fort McKavett, a prominent cavalry and infantry base active in the mid-19th century.

The fort, which Gen. William T. Sherman called “the prettiest post in Texas,” was established in 1852 to protect settlers and California-bound travellers from Comanches, Kiowas and other nomadic tribes.  All four regiments of the Buffalo Soldiers – the African-American cavalry and infantry units – served at one time or another there.

The Episcopal Church’s connection to Fort McKavett and many other frontier outposts is due to the fact that the Army was fond of Episcopal priests serving as chaplains.

“The Army liked the regimented liturgy of the Episcopal Church,” Roque said.  Church services were held at the fort’s school house and attracted soldiers and settlers alike.

When the fort closed in 1883, the chaplains left, the services at the base ended and the area was left without a church or Episcopal minister. So “the local residents demanded that the bishop give them their own priest,” Roque said. They founded St. James as a mission in 1884 and formally organized the church in 1889.

A decade later they built their first church, a wooden structure that was so damaged by a twister that the bishop eventually condemned it and ordered all the furnishings removed for safekeeping. The present rock building was constructed in 1941.

“Many prayers have bounced off these walls,” said Bishop’s Warden Jimmy Martin.

Some dozen or so parishioners are Sunday regulars, while 30 to 40 might show up at Easter.  Not all of those who attend services are confirmed Episcopalians, either.  Some belong to other denominations but attend St. James because it’s the only church around.

“We keep hanging in there,” Martin said.  “We lose some once in a while. It’s kind of dwindled down.  But in the last few years we haven’t dwindled any more. We manage to have enough children to keep going.”

Most families, like Martin and his wife Sherry, are long-time ranchers in the area.  Their own three children, now adults, were raised attending St. James.

Newcomers arrive now and then as old-time ranchers subdivide their sprawling holdings.  The smaller acreage is snatched up by those who may want a home in the country or a weekend getaway.

The congregation is especially pleased to see a young family now attends St. James with their three children.

Martin himself grew up a “chicken eating Methodist and my wife grew up a Baptist.  She wouldn’t give and I wouldn’t give so we ended up Episcopalians,” he said. “There was something that grabbed us about the Episcopal Church and we’ve been here ever since.”

In an ironic twist, one of the Martin’s children is now a Methodist, one a Baptist and one an Episcopalian.

St. James was served by supply priests until the minister at St. John’s in Sonora began going up to St. James, leading to the tradition of yoking the two parishes together under the same minister. Roque has served at St. James and St. John’s since 2008.

If parishioners want to attend Sunday school, they drive down to St. John’s in Sonora.  That’s because St. James doesn’t have Sunday school, Bible studies or plethora of other activities that play a role at larger churches.

Smallness does have its virtue, Martin believes. When he’s visited larger churches, he wonders “how many of those people does that priest know personally?”

Martin paused. “For better or for worse.”

After church, “we may hang around for an hour just chewing the fat with each other,” Martin said. Or they’ll pull out the folding chairs and tables and have a pot-luck lunch.

“You don’t walk outside to a big old parking lot and find your car and you don’t know anyone’s name,” Martin said. “Gosh, we’re all old friends.”

Over the years, “the chemistry of the church has changed,” he said. “When we pass the peace, we hug each other. In the old days, you’d just nod.”

Roque has taken to the area’s rich ranching culture and probably has the distinction of being the only priest in the diocese who helps his parishioners round up cattle.  “It also gives him a chance to meditate and pray,” Martin said.

Members of the congregation have gone on mission trips to Costa Rica and Nicaragua and have sent veterinary and medical teams to Honduras.  One family has been actively involved in Cursillo and helped host an Ultreya at Fort McKavett.

They are also involved with the diocese’s Good Samaritan Community Services and Martin himself volunteers with prison ministries.

But they only had to look at the neighboring fort to come up with a novel idea for a new outreach program – star parties.

Every quarter, amateur astronomers from Houston set up a dozen or so telescopes at Fort McKavett for visitors to gaze at distant plants, stars and galaxies.

“We’re on top of a hill and you can see forever,” Martin said. “It’s one of the darkest places in North America.”

Star gazers arrive in the late afternoon and stay until around 10 p.m.

“So we provided dinner for the star party,” Martin said.

They cooked brisket, set out buns and all the trimmings and asked for donations to cover the meal.  They took in $300 and are “all hopped up to do it again,” Martin said.

Roque’s attraction to Fort McKavett is rooted in his childhood. A native of New Braunfels, he was “born, raised, baptized and confirmed in the diocese.”

He majored in history and attended seminary at Sewanee: The University of the South.

When he was a youngster, his Boy Scout troop camped at Fort McKavett. Later, he joined Civil War and cavalry re-enactment groups that gathered at McKavett.

“I’ve had a lot of ties and connections out here,” he said.  And in a twist of fate, “My favorite high school teacher is from here, she moved back home and now she attends church here.”

His involvement in military re-enactments has morphed into another outreach at the fort. He volunteers as the post’s chaplain, sporting an historical accurate replica of an Army chaplain’s frock coat.

Last summer, Fort McKavett held a summer camp that attracted about 40 children from across Texas. He held prayer services and talked about what the Army chaplain did on the frontier.

During heritage days at McKavett, Roque conducts a Eucharist using the 1789 Book of Common Prayer, the version seen on the 1870s Texas frontier.

“It’s a neat experience being able to be out here,” he said. “I realized that this is the type of ministry that I’m good at.  I go out on ranches, I work cattle with some of the ranchers, I still do my hospital visits and my pastoral care.”

He’s also been a part-time police officer for more than 16 years.

“I tease St. John’s in Sonora all the time,” Roque said. “I wouldn’t have come out here to St. John’s if it weren’t also for the call to St. James. They laugh because they knew how much I love St. James.”

West Texans have always been known as a self-reliant and independent lot, a trait reflected at St. James.

“St. James is a staunchly independent and self-reliant church,” Roque said.  If the diocese asks “if there is anything we can do for you, our members will say we’ve been around for over a hundred years.  Just give us a priest and we’ll be all right.”

— Mike Patterson is a member of St. Michael and All Saints Episcopal Church in Blanco, Texas. He writes regularly for The Church News, the newsletter of the Diocese of West Texas.