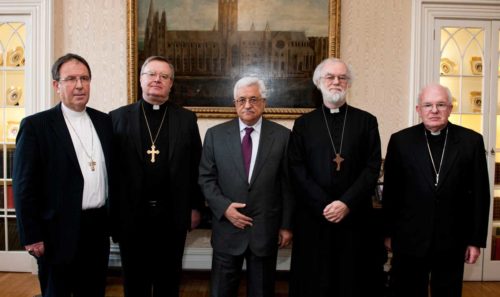 [Lambeth Palace] Palestinian Authority President Mahmoud Abbas on Jan. 17 met with representatives of Christian churches in the United Kingdom, led by the Archbishop of Liverpool Patrick Kelly and Archbishop of Canterbury Rowan Williams, and moderator of the General Assembly of the Church of Scotland, Bishop David Arnott.

The meeting, which took place at Lambeth Palace, discussed the plight of Christians in the Holy Land and an overview of the political situation affecting the ongoing peace process. Abbas said that the resumption of talks in the context of the Arab spring offered a rare opportunity that needed to be grasped now or it would be missed forever.

“Having worshipped in Bethlehem on Christmas Eve, I have seen the struggle of the Palestinian people in the very basics of living but also their deep desire for a negotiated peace between the peoples who share the land. I urge everyone to grasp this opportunity,” Arnott said.

“Last week as part of the Holy Land Coordination, where we shared our faith with the Christian communities, we witnessed the effects of occupation and insecurity on the people of this land. There is an urgent need for strong and creative leadership in order to address the core issues of this long conflict. The people’s desperate yearning for peace needs to be fulfilled and this meeting today with President Abbas reinforced our determination,” said Kelly, who was representing the international affairs department of the Catholic Bishops’ Conference.

“We continue to share the hopes of the Palestinian leadership for a lasting and just peace in the Holy Land, and we pray for the courage on all sides to break the current deadlock. Young people in Israel and in the Palestinian territories long for justice and stability and they must not be let down. We were deeply grateful to President Abbas for taking time to share with us his concerns and aspirations,” said Williams.