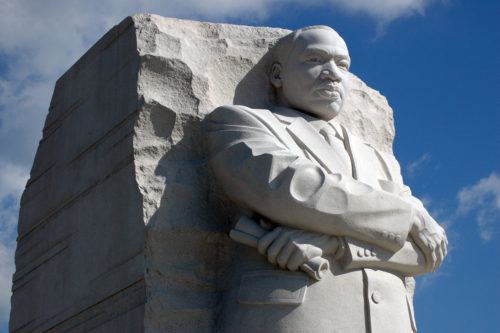 The Martin Luther King, Jr. Memorial is located in West Potomac Park in Washington, D.C., southwest of the National Mall, opened to the public on Aug. 22, 2011, after more than two decades of planning, fund-raising and construction. Photo/National Park Service

[Episcopal News Service] Episcopalians across the nation are bolstering their Jan. 16 celebrations of Martin Luther King, Jr. Day by adding deeds to words, service to song.

A day camp at St. John’s Church in North Haven, Connecticut, aims to illustrate for young and old that Jan. 16 is no ordinary holiday, but an opportunity to pair fun and games with community reflection, collaboration and service.

In Savannah, Georgia, laity and clergy, children and adults alike, will march as the  St. Matthew’s Episcopal Church choir joins those from other churches to belt out gospel tunes from atop a parade float.

After a Sunday evening “lock-in” at Grace Cathedral, San Francisco, about 90 youth will join a parade and conclude the day painting, pruning, packing, planting and praying at a variety of local mission projects.

Participants at a Trinity Church in Belleville, Michigan, service will re-enact a freedom march and recall some of the “unsung” heroes of the civil rights movement.

The Peace Fellowship of St. Augustine’s in-the-Woods Church, Freeland, on Whidbey Island, about 25 miles north of Seattle, is commemorating the 50th anniversary of the Freedom Riders, ordinary people who in 1961 rode buses from the north to the south to challenge segregated public transportation.

Such commemorations keep alive King’s dream of equality and opportunity, and help the nation inch toward its full realization, participants said. King, a prominent leader of the civil rights movement and Nobel Peace Prize Laureate, was assassinated April 4, 1968, at age 39 in Memphis, where he’d gone to support striking sanitation workers. A federal holiday commemorating his birthday on the third Monday in January was signed into law in 1983 and first observed in 1986. Some states initially resisted; the holiday was officially observed in all 50 states for the first time in 2000.

Connecticut day camp hopes to teach, inspire, collaborate
About 45 children have already registered for St. John’s Martin Luther King, Jr. Day Camp and Michele Kearney, director of children and youth ministries, was expecting that number to nearly double by Monday, she said in a Jan. 11 telephone interview from the North Haven church.

The camp — a first for the church — is a community collaboration between the local clergy association, schools and the town of North Haven, and combines both educational and service opportunities, she said.

Retired teachers and older youth will assist as children aged four through fifth grade participate in music, stories and poetry, drama, games, arts, crafts and other entertainment focused on telling the story of King and the civil rights movement.

“Since so many parents have to work on Martin Luther King, Jr. Day and schools are not in session, the clergy association wanted to honor Dr. King’s legacy by taking the opportunity to enhance our children’s knowledge of Dr. King’s life and work,” said the Rev. Matthew Lincoln, St. John’s rector. “We hope this day camp will exemplify the kind of community collaboration that Dr. King valued.”

Kearney agreed, adding that the camp seeks to offer opportunities for students so the holiday is more “than just another day off school with no meaning.”

“It just seems like we have such an important day, a day that is so important to our country that … it’s important to reach out as a community and help each other realize the importance of the day. This is a day to celebrate.”

‘Freed’ for mission and service
Upon being “freed” after a Jan. 15 overnight lock-in at San Francisco’s Grace Cathedral, some 90 youth from across the Diocese of California will participate in one of four local mission projects, according to Jennifer Snow, diocesan associate for discipleship ministries.

“This is the first year we are including a mission component,” Snow said in a Jan. 12 e-mail to ENS. The program, which includes participation from “a sizeable Methodist contingent” is intended to combine “fun, friendship and creative celebration with deepening faith” as well as connecting spirituality to justice, she added.

“Late Sunday night in the Cathedral we will celebrate a unique liturgy centered around the lives of people like Martin Luther King, Jr., who have worked for justice among all people. On Monday morning we will wake up to march in the King parade. That afternoon we offer ourselves for mission and service,” Snow said. “It roots us in the past and moves us to the present and future, from reflection to action.”

Singing for King: same fight, different round
Between video excerpts of King’s speeches, a choir of Episcopalians and others within the Diocese of Georgia will belt out gospel music from the lead float in the annual Martin Luther King, Jr. Day Parade through Savannah, according to A.L. Addington, a coordinator for the Jan. 16 event.

“It’ll be a lot of contemporary gospel music. And some Mahalia Jackson,” he added.

The evening before, local youth will join a lock-in at St. Matthew’s, according to the Rev. Cheryl Parris, rector.

“Each year, the youth of our convocation gather together the Sunday evening before the parade to reflect on the life and ministry of Dr. King,” she said. “We have heartfelt discussions about where we have come.”

Parris, who’ll be among hundreds marching alongside the float, said it’s the first time in the parade’s 33-year history that there will be an Episcopal float. “We’ve always participated — the church and the diocese” but not with a float, which will be among 300 others.

Events like the King Day parade “are visible reminders to us about where we are and where we are not in terms of race relations overall,” she added. “As citizens and as Christians, we need these events as reminders that we are, at best, at the end of the beginning of this struggle. We are in a different round of the same fight.”

Peacemaking and freedom riders
St. Augustine’s in-the-Woods Church in western Washington state, is hosting “Blessed be the Peace Makers” a program featuring Ora Houston, a member of St. James Church in Austin, Texas, a deputy to General Convention and an active leader in the Union of Black Episcopalians.

Program coordinator Dick Hall said “we thought it was important to offer it to the community. We need to honor nonviolent activism and change.”

Hall, a retired teacher, said that efforts were made to involve youth “because we don’t want them to forget what sacrifices were made. It’s really America’s original sin, slavery. We’re still dealing with racism, and white privilege and we still need to remind people of that,” he said.

And to remind young people about nonviolent alternatives, he added. “Youth today get a lot of advertising toward military and how to use force to solve problems. It’s really important that we put forth a different avenue, a different alternative and it’s really appropriate that we do it in a church because, bottom line, this was a church-based movement. It came out of the church and faith-based motivation.”

Incorporating the freedom riders, who were black and white and who challenged segregation in public transportation by making bus trips to the south in 1961, is also important, Hall believes.

“It says a lot about nonviolence in the face of violence, about how redemptive nonviolence brings about real change rather than violence reacting to violence.”

Similarly, the program at Trinity Church in Belleville will also feature some unsung heroes of the civil rights movement during “The Dream Lives On,” program Jan. 16, said the Rev. John Hagan, rector.

They’ll also simulate a freedom march, carrying signs and singing protest songs, and welcome a local drama group, the Freedom Players, who will deliver excerpts from some of King’s speeches and offer civil rights-era music followed by a discussion.

“It’s important to commemorate Dr. King,” Hagan said in a Jan. 11 interview from his office. “He was a real hero and we want to celebrate that.”

Youth throughout the Diocese of Western New York will gather for “Injustice anywhere is a threat to justice everywhere” as a local unsung hero, Thomas Ashford, describes challenges he faced while trying to join St. Peter’s Church in Niagara Falls in 1950.

Bishop Franklin will also describe, via videotaped message, how his grandmother influenced him by daring to invite African Americans to her Mississippi home during the tumultuous civil rights era, said Laurie Wozniak, diocesan communication officer, in an e-mail to ENS.

Ashford, 81, recalled during a Jan. 11 telephone interview that although at the time he was a Methodist in good standing, after one visit in 1950 he decided St. Peter’s was the church for him. But it took parishioners a few years to agree.

It happened back in the day when ladies wore hats and gloves to church and men dressed up in suits and ties and Florsheim shoes, and when African Americans who showed up at white churches were routinely sent to one of the local black churches, he said.

“I said, but I want to be a member of St. Peter’s. It’s the only place I want to go. They just didn’t want any blacks there, but I was not going to leave. I was going to stay there, so I stayed there and stuck it out,” he said. At one point he was even told “Hell would freeze over” before he’d be accepted as a member, he recalled.

In 1952, he was confirmed and has been active ever since, introducing other family members to the church. He still works three days a week at a local machine shop, serves as junior warden and along with his wife helped organize a couple’s ministry.