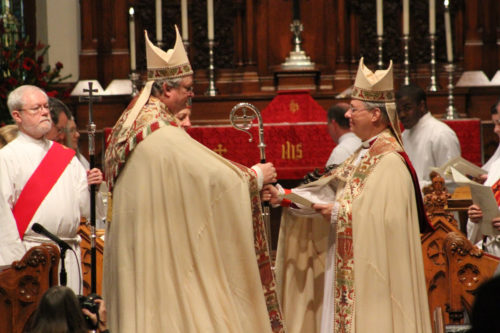 The service for Sloan, who had been the bishop suffragan of the diocese since 2008, took place at the Cathedral Church of the Advent in Birmingham.

Presiding Bishop Katharine Jefferts Schori officiated at the service. She had also been Sloan’s chief consecrator in 2008.

Noting Sloan’s reputation as a storyteller, in the tradition of so many Mississippi authors, he called upon Sloan to continue telling the story of Christ and his people: “Who we are, where we come from, and what we are called to become.”

“Continue to tell the stories of human foibles and God’s holy and mysterious grace,” he concluded, according to a diocesan story about the service. “Tell the stories, my brother, so that the Word becomes flesh and dwells among us.”

The reader of the Old Testament Lesson was Zach Woolley, who has been a camper and a staff member of Special Session at Alabama’s Camp McDowell. The Special Session program, which Sloan inaugurated and continues to co-direct, is designed for summer campers with mental and physical disabilities.

The liturgy opened with preludes for organ and brass under the direction of Dr. Stephen G. Schaeffer, the cathedral’s music director and organist. The cathedral choir sang anthems, including a solo by Amberlyn Richardson on “Prayer of the Venerable Bede” by Richard Proulx.

Jefferts Schori spent the afternoon after the service with visitors at Trinity Commons, the home of Episcopal campus ministries in Birmingham.

On Friday, she met with health and medical researchers at the University of Alabama at Birmingham. “It was a fascinating conversation,” she told diocesan clergy at a luncheon that day, according to the diocesan news story. She said their 90-minute conversation focused on “the interface of their science and their faith.”

She said the discussion touched on faith in issues of death and dying. She was especially struck, she said, by questions raised about the legacy of racism in medical research and how it affects the recruitment of African Americans in clinical research trials.

Sloan, 56, has been bishop suffragan of Alabama since 2008. He was elected bishop diocesan in July 2011. He is the former rector of St. Thomas Church in Huntsville, and before that served churches in his native Mississippi. He is also a member of the Episcopal Church’s Standing Commission on Liturgy and Music. He is married to the former Tina Marie Brown. Their children, Mary Nell and McKee, led the recitation of the Psalm in the service.

The Diocese of Alabama includes 34,000 members in 90 congregations, covering north and central Alabama and the Black Belt region. The diocese has three campus ministry centers and eight campus chaplains. The diocese has established 11 new Episcopal churches since 1990. It is active in a number of ministries of outreach including significant work in Haiti.

Links to photo and video coverage of the Jan. 7 event is available at the end of the diocesan news story here.