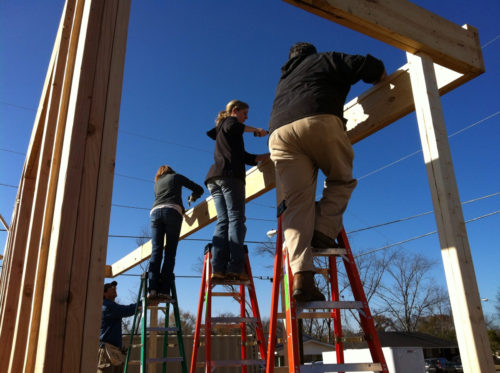 [Episcopal News Service] In a year of extraordinary natural disasters – tornadoes, fires, floods and earthquakes – Episcopalians are reaching out nationally and internationally through prayer, financial assistance and “boots on the ground” relief, recovery and rebuilding efforts, and are forging creative partnerships in the process.

After a string of deadly late April tornadoes shredded most of the affordable housing in Tuscaloosa, Alabama, three Episcopal churches there formed a cooperative to rebuild, partnered with Habitat for Humanity, and on Dec. 1 broke ground on the first home.

“There was a shortage of affordable housing even before the tornadoes” which killed more than 40 people and damaged or destroyed more than 7,000 homes in Tuscaloosa alone, according to the Rev. Kelley Hudlow, chair of the board of the Episcopal Tornado Recovery Cooperative (ETRC).

The ETRC also has partnered with the Diocese of Alabama and Episcopal Relief & Development, which supplied grants for a disaster case manager, a construction project manager and building materials, in what Hudlow describes as a long-term recovery effort. 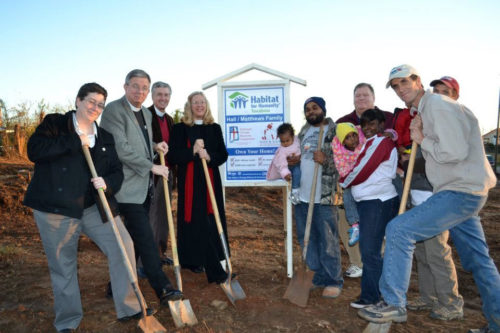 The three churches – Christ Church, Canterbury Episcopal Chapel and Student Center, and St. Matthias – weren’t damaged by the tornado. Each offered immediate individual responses after the tornado struck, but quickly recognized the need for long-term recovery efforts and to ensure that residents aren’t priced out of the future housing market, Hudlow said during a recent telephone interview.

“We felt there was a real need, that’s why we partnered with Habitat for Humanity,” Hudlow said. “The Episcopal Church was in a good position to bring financial resources, to make sure quality affordable housing goes back and that the land doesn’t get eaten up by developers for business or housing targeted toward the higher income market.”

The ETRC is just one example of how Episcopalians are reaching out.

“This has been one of the busiest years on record in terms of most disasters all over the country, not only some major disasters like the tornadoes in Alabama and Hurricane Irene but there were smaller disasters as well,” said Katie Mears, program manager for U.S. disaster preparedness and response for Episcopal Relief & Development (http://www.er-d.org).

She said that the agency is working with local churches and other partners nationally in some 17 dioceses and internationally in 41 countries, offering support, relief and long-term recovery assistance.

Although the Episcopal churches in Texas escaped damage in September when a series of wildfires scorched thousands of acres of land, consumed more than 1,500 homes, and killed several people, they quickly mobilized to aid those affected, according to Luke Blount, a communications specialist with the Episcopal Diocese of Texas.

St. Luke’s on the Lake Church in Austin served as a refuge for weary firefighters and displaced homeowners. While its members aided local residents and emergency workers throughout the fires, they also continued to offer relief to tornado-devastated communities in Alabama and Mississippi.

Allen Griswold, St. Luke’s junior warden, said in a recent telephone interview that he’d made eight trips in eight months since April tornadoes “all but wiped out” the small towns of Hackleburg and Phil Campbell in Alabama and Smithville, Mississippi. The three-day storm system, known as the 2011 Super Outbreak, is considered the largest tornado outbreak on record, spawning more than 353 tornadoes in 21 states and killing 346 people, including at least 239 in Alabama.

On Dec. 18, Griswold said he had just completed the 3,200-mile round-trip drive, trying to bring Christmas to people whom “everyone’s pretty much forgotten about.”

“One woman, Jennifer, lost her 38-year-old husband two weeks before the tornado from a rare disease,” said Griswold, 61. “Her house was completely destroyed. She has absolutely nothing. Her daughter Sky asked for a locket for Christmas to wear around her neck so she could carry a picture of her dad with her. Another child asked for bubbles. You know, those little bottles that you blow bubbles out of.”

Through “boots on the ground” work Griswold is developing a network of contacts via various Episcopal churches throughout Alabama “so when another event happens we can connect with each other.” He also has forged partnerships with the local Baptist church and the Church of Christ, as well as the local school system in Smithville, Mississippi.

“We have a cobbled-in school area now,” he said. “We’ve provided food to help, bought a golf cart so the principal can move around … and we continue to bring food, water, money, appliances and building supplies.”

In Smithville, three students were orphaned by the tornado but are struggling to finish high school, he said. “They had single parents that were lost during the tornado. One [student] was living in his pickup truck. That has changed now. There’s another girl, working two jobs, about 13 miles away from Smithville to try and feed herself and go to school and hold on,” he said. “That is a commitment to education if I’ve ever seen it.”

As a result, he has established a fund with the school principal “to make sure the kids have caps and gowns for graduation and to have clothes to wear to graduate with, because they have nothing,” he said.

The United Nations considers El Salvador and Central America most vulnerable to the affects of climate change. In February 2011, the World Bank gave a $50 billion loan dedicated to natural disaster response to the government of El Salvador.

Fundación Cristosal, was formed in the aftermath of Hurricane Mitch by Archbishop Martin Barahona and former director the Rev. Richard Bower, an Episcopal priest from Vermont, to accompany the Anglican Episcopal Church of El Salvador. It has worked with the Episcopal Church and Episcopal Relief & Development to help communities in El Salvador recover from an extended civil war and a devastating earthquake in 2001.

Food shortages and reliance on imports have led to increased prices and speculation, Bullock said.

Fundación Cristosal is working in a municipality outside San Salvador to address the needs of displaced people.

“The problem is [that] the poor are the most affected by these storms, intensifying the cycle of poverty,” Bullock said. “It’s [the] interesting effect of climate change affecting the poor.”

Flooding also affected areas along the Mississippi River from Illinois to the Gulf Coast in May, where the Rev. Scott Lenoir, a diocesan disaster relief coordinator, led a caravan of trucks to help pack up and move out those in flood danger. Clergy conducted pastoral “walk-arounds” to assess and communicate needs.

Similarly, in October, Episcopal clergy and congregations also mobilized via a congregational relay system in the Diocese of Vermont to assist victims of floods in the wake of Hurricane Irene. Ranging in intensity from a major category 1 to a category-3 hurricane, Irene blasted the Caribbean, the eastern seaboard of the United States from the Carolinas to Cape Cod and as far north as Canada in late August. It made landfall several times, with sustained winds as high as 70 miles an hour, causing severe flooding, killing at least 50 people and causing property damages estimated in the billions of dollars.

Flooding also inundated the small boom town of Minot, North Dakota, where commercial drilling for oil had already created a shortage of already-scarce affordable housing, according to the Rev. John Floberg, canon missioner for the Diocese of North Dakota.

In late June, torrential rains, along with melting snow and ice in Canada overwhelmed reservoirs feeding the Souris River in Minot, a town of 36,000 and “that’s when it came over the dikes and they [the residents] didn’t have much warning,” Floberg said.

He is scrambling, in partnership with other responders, to alleviate the suffering of residents six months after the record-breaking flood wiped out a fourth of Minot’s housing and sent about 11,000 people to temporary FEMA trailers, “the third biggest use of FEMA after Katrina and Ike, but nobody really knows about it,” said Episcopal Relief & Development’s Katie Mears.

It’s a small diocese, with 21 congregations, three of which can support full-time clergy. Yet, the diocese has reached out in a big way to help flood victims, not just in Minot but also residents of the nearby Spirit Lake Native American Reservation an hour away, where a decade of rising water table has also flooded homes, Mears said. The agency is supporting a case manager to work with the Spirit Lake community.

On Dec. 19, Floberg issued an urgent call for volunteers “to come and to come now” to help rehab some 4,000 homes that sat for a month in floodwaters 10 to 12 feet deep, and laced with sewage and toxic agricultural chemicals. The chemicals seeped into drywall, studs and floors, which subsequently were “mucked out” and stripped. What’s needed now is replacing siding, floors, drywall, sheet rock, insulation and windows, he said.

“The goal for the next two years is to get the homes back to safe and livable,” he said during a telephone interview. Along with local Evangelical Lutheran Church in America and United Methodist Church partners, Floberg is hoping to coordinate groups of volunteers, noting that many people stay away because of the perception of North Dakota’s inclement weather.

“We are ready to go. We are ready to receive volunteers … We’re putting out an urgent call for anybody who can come now. We’ve got work to do,” he said.

“ERD has given us a grant to employ two people, one as a project manager and one as a volunteer coordinator. They will be working together to find groups and individuals to come to Minot for a time and do work in the community to rebuild houses,” he added.

Similarly, the Nippon Sei Ko Kai (the Anglican Church in Japan) has reached out with a “Let Us Walk Together” project to support victims of the March 11 magnitude-9 earthquake and tsunami along Japan’s west and east coast that left 30,000 dead or missing.

The project, announced in late May, is focused on rebuilding the lives and communities of victims, many who were staying in emergency shelters, according to the Most. Rev. Nathaniel Makoto Uematsu, NSKK primate in a May statement.

“We are in contact with our partners in the Philippines and are sending support in response to needs as our partners on the ground complete their assessments,” said Kirsten Laursen Muth, senior director of international programs, in a statement posted on the agency’s website. “At the moment, we are asking people to pray for those who lost loved ones in the disaster, and for the rescue teams who are putting themselves at risk to save lives.”

And to cap off a year of extraordinary disasters, many Christmas church services in Christchurch, New Zealand were held outdoors after four strong earthquakes struck within three hours on Dec. 23, injuring 60, and causing further damage to the Anglican and Catholic cathedrals.

Christchurch Mayor Bob Parker said the quakes, which included 5.8 and 6.0 magnitude temblors, were distressing at a time when the city is still recovering from the February 6.1-magnitude quake that killed 181 people.

The Anglican ChristChurch cathedral sustained further significant damage, after suffering the loss of its bell tower and famed rose window in February, according to Anglican Taonga, a publication of the Anglican Church in Aotearoa, New Zealand and Polynesia. The building was deconsecrated on Nov. 9, preparatory to partial demolition.

Diocese of Christchurch Bishop Victoria Matthews, who urged worshipers to hold services in the open air this year, said in a Dec. 24 message: “Who knows? Maybe this Christmas some people who would not otherwise darken the door of a church will hear the music and join the throng. The one thing we do know – with certainty – is that Jesus will be present with us.”

— The Rev. Pat McCaughan is a correspondent for the Episcopal News Service. She is based in Los Angeles. ENS staff Matthew Davies, Lynette Wilson and Sharon Sheridan contributed to this report.