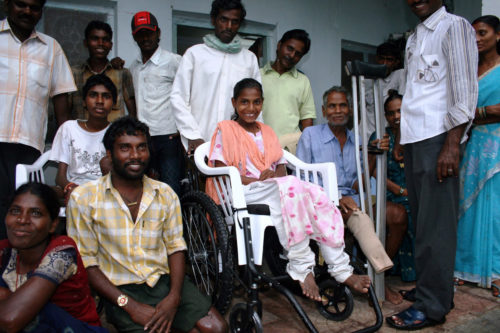 [Episcopal News Service] Christmas is less than two weeks away but there’s still plenty of time for last-minute gifts that give back.

From $3 to $300, local and international nonprofit agencies offer alternative gifts – and not just during the holidays – that can help convert a little cash into big change.

For $12, one life-saving, insecticide-treated mosquito net can save three people from the needless suffering of malaria, said Joy Shigaki, director of the Episcopal Relief & Development NetsforLife Inspiration Fund.

“We often don’t need more ‘stuff’ in our lives. Our closets and basements are already full,” said Shigaki in a recent e-mail to ENS. “Giving alternative gifts is a meaningful way to remember those we love during Christmas and support programs like NetsforLife. Throughout the year, it is also a fitting way to honor friends and family for birthdays, anniversaries, baptisms, or other special occasions.”

The Inspiration Fund – a churchwide, grassroots effort to educate, engage and unite Episcopalians to support the millennium development goals – is about halfway to its goal of raising $5 million by December 2012. The agency aims to distribute 7 million nets by 2013. 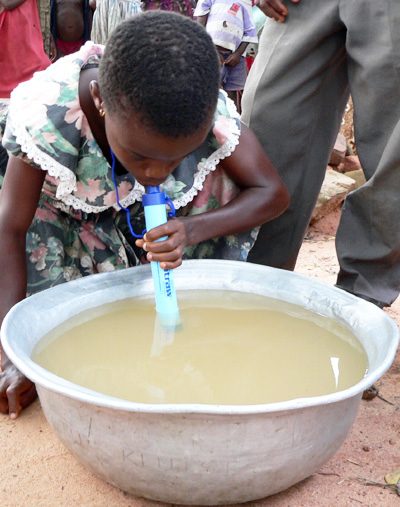 Barbara van Gaasbeek of Irvine, California, wanted to honor a friend, so she bought a LifeStraw for $20.

Available through Giving Children Hope, it’s a straw – and it’s a portable purification system that filters bacteria and viruses to make unsafe water drinkable. Sean Lawrence, nonprofit partner manager for GCH, said the straws purchased in December are being sent along with shipments to Afghanistan and Somalia in thousand-unit batches.

“The beauty of the Life Straw is that what you see is what you get. It’s a large straw with a pull-off cap on the top and bottom,” Lawrence said during a recent telephone interview from his Buena Park, California office. “One end goes into the water source, the other into the mouth. It removes 99.9 percent of the bacteria, including those that cause cholera and other diseases. There’s no set-up, no cleaning, no maintenance and it lasts for 1,000 liters, up to a year for adults and two years for children,” he said.

In exchange for van Gaasbeek’s purchase, her friend Mary received a card describing the gift. Both gained the satisfaction of reaching out and helping others, van Gaasbeek said.

“We can turn on the faucet anytime we want,” van Gaasbeek said during a recent telephone interview. “That’s not true everywhere. Others have to resort to filthy disease-ridden water just to survive. It seems so out of balance and wrong to me that anything we can do to redress it, we should do.”

She promptly bought nine more of the straws and began selling them at her church, St. Mary’s in Laguna Beach, as a holiday gift alternative. In short order, she’d sold 25 and is hoping for more pre- and even post-holiday sales.

“It’s a wonderful way of honoring somebody or remembering somebody because this is the gift of life and here in your hands is a simple way of preventing diseases, bacteria and illness from unsanitary drinking water,” she said. “I can’t think of a better gift than this for Christmas.”

Similarly, Erin Tharp, 28, of Corona, California, wanted to give a gift with meaning. A bout with viral encephalitis left her unable to speak and in a wheelchair for 13 years, but it didn’t stop her from asking other members of St. John the Baptist Episcopal Church to meet an Advent Challenge to purchase 100 wheelchairs from the Free Wheelchair Mission.

But first, Tharp purchased 10 herself.

The chair “is inexpensive by our standards but it might as well cost a million dollars to the people that need them. Simply put, $60 is a fortune to them,” Tharp wrote by typing a single letter at a time and using a special iPad, in a sermon read to the congregation by someone else. At last count, the congregation had surpassed its goal, raising enough money to purchase at least 120 wheelchairs, according to the Very Rev. John Saville, rector.

Mike Kenyon, pastor of church development for Free Wheelchair Mission, said the Irvine organization has already delivered about 500,000 wheelchairs toward its goal of 20 million distributed worldwide.

Made of plastic lawn chairs, bicycle tires and other recyclable parts, the wheelchair costs $63.94 to manufacture and was designed for use over rugged terrain. Don Schoendorfer, a mechanical engineer, invented the chair after a trip to Morocco, where he witnessed a disabled woman struggling to drag herself across a road, barely evading traffic, Kenyon said. The company was established in 2001.

“Because of my wheelchair, I have had so many opportunities,” Tharp wrote in her sermon. “The people Free Wheelchair Mission help don’t want to be able to take vacations or live luxuriously; they just want to be able to safely cross a street or shop for groceries.”

Grace Church, Hastings on Hudson, New York, held its alternative gift fair the weekend before Thanksgiving but offers gifts through year-round nonprofit organizations such as Alternative Gifts international and SERVV that make available handmade fair trade items in a variety of price ranges, according to the Rev. Anna Pearson, rector.

“We have local options, as well,” Pearson said during a recent telephone interview from her office. “With the economic downturn we felt it was important to give people the opportunity to do both international and very local gift-giving.”

So, $10 purchased a holiday turkey with all the trimmings for a family through the local food pantry. “A birthday-in-a-box” for a child who wouldn’t otherwise have a celebration included cake and all the decorations plus a small gift sold for $25, she said.

Family and children’s items were popular sellers. “Everybody loves to buy a bunny rabbit or a goat” through Episcopal Relief & Development’s Gifts for Life Animals and Agriculture Program, Pearson said. Other gift options included more than 30 agencies that offer legal advocacy for migrant workers and environmental preservation of the Hudson River, for example.

The church makes a special effort to include something for everyone including “a couple of big-ticket items, although for the most part we try to keep the gifts reasonably priced and affordable to people of all ages and backgrounds and types of budgets,” Pearson said.

The price tag for one big-ticket item was about $330, for a clean water storage tank available for purchase for a project in Kenya, for example, she said. The two-day fair netted more than $25,000, shared among the participating organizations, she said.

“The church doesn’t make anything from the fair. We really feel called to do this as a congregation,” Pearson said. “We feel that it’s one way we can walk hand in hand with some of our brothers and sisters in Christ that are struggling.

“We try very hard to have a good representation of a lot of different issues so you can definitely find something that will connect with a piece of someone’s life that you love,” she added.

“It’s very important for our congregation to do this,” Pearson added. Not only does it create enormous community goodwill, it is also “in line with the gospel mandate to feed the hungry and to clothe the naked and with Jesus’ desire for us to do that. Not just because it helps the people that are receiving the gifts, but because it helps us too. It helps us give gifts with meaning, that you know are not going to be discarded and that will affect peoples’ lives beyond the gift giver and the gift recipient.”

At St. Luke’s Church in Durham, North Carolina, for as little as $3, gift-givers could aid American Red Cross’s efforts to wipe out measles, which kills an estimated 164,000 people yearly, mostly children in developing countries. In exchange, the gift givers received a pen and a bow to give to those they wanted to honor.

Jean Willard, a retired volunteer director who organized St. Luke’s Dec. 11 alternative fair, said she factors in a range of issues when inviting international and local agencies to participate in the yearly event.

“We always try and do something concerning education, approaching the Millennium Development Goals, and there’s a strong health emphasis as well as housing and urban ministries,” she said during a recent telephone interview from her home.

For example, $50 purchased a pack-and-play crib for low-income families through a local ‘Cribs for Kids’ program. Families unable to purchase cribs were sleeping with their children and the incidence of sudden infant death syndrome or SIDS was greater than in other populations, she said.

Again, Episcopal Relief & Development’s NetsforLife was a popular item; other offerings included the Wiser School for Girls in Keny, as well as aid for families of children undergoing bone marrow transplants at a local hospital and a “Crayons to Calculator” program that makes school supplies available to teachers in low-income districts, she said.

At $11,000 and still counting, Willard said proceeds from the fair were “up dramatically” this year, despite the economic downturn.

She feels strongly that those “who have” need to share with those who “aren’t so well off. It’s a way you can provide opportunities for people that might not go online and donate, and this gives it a face. It’s an outlet for people on a more personal level to help address these needs and think more consciously of this kind of gift-giving during the holidays.”

Alternative gift fairs “are a concept I’d like to see expanded,” she said. “It’s very easy to put one together, a few e-mails and a few phone calls. The nonprofits are out there, they hop on an opportunity and it’s easy enough for other churches to get involved.”