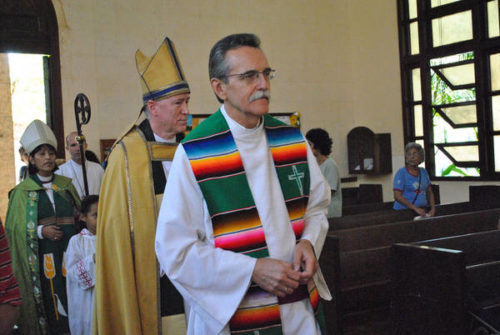 The Ven. Michael Pollesel will be consecrated as Bishop of Uruguay in the late spring. Photo/Ali Symons/General Synod communications

[Anglican Journal] The Ven. Michael Pollesel, former general secretary of the Anglican Church of Canada, has been elected bishop of Uruguay by the diocesan synod.

The election has still to be approved by the province of the Southern Cone, whose House of Bishops meets in May 2012. “I expect the consecration would follow within the next month after that,” said Pollesel, who after resigning as general secretary last summer, became rector at Toronto’s St. Nicholas Church, Birchmount.

He will take up the position in Uruguay, a country of 3.5 million people, after Bishop Miguel Tamayo Zalviídar retires in June. He will stay on at St. Nicholas until a new incumbent is found.

Pollesel, who speaks fluent Spanish, had visited this poster-country for Latin American democracy several times but has not lived there. Based in the port city of Montevideo, the diocese has solid ties to other denominations. “All churches work very well ecumenically, and interfaith activity is strong as well,” said Pollesel. “But the country is very secular, with even the Roman Catholic Church claiming only about three or four percent of the population as regular attenders.”

The diocese currently has female deacons and wants to proceed with the ordination of women priests but the province of the Southern Cone has not approved this step.

“I’m excited about the possibilities that this new challenge brings to me at this stage in my life and I ask for your prayers,” said Pollesel.