[Episcopal News Service] On a recent trip to New Zealand, I was saddened to learn that I wouldn’t be able to see Christchurch Cathedral, the symbolic heart of the City of Christchurch and the home parish for hundreds of Anglicans. Earlier this year I had followed the news accounts of the series of earthquakes that had damaged Christchurch, but until I visited in person I didn’t realize the extent of the damage.

Months after the quakes, the center of Christchurch is still a tangled mess of collapsed and damaged buildings, including the stately Gothic-style cathedral that had graced its downtown since 1881. Even worse, while I was in New Zealand it was announced that the church is so damaged that it cannot be repaired.

In talking to residents and reading the New Zealand newspapers, I was struck by how beloved Christchurch Cathedral is, even for those who are not Anglican. In a letter to the editor of one of the national newspapers, for example, a woman wrote of how the church needed to be rebuilt as a sign of hope for the entire country. She recalled how the Germans had rebuilt the Frauenkirche of Dresden, a church that had been reduced to rubble in the firebombing raids of World War II. Thanks to a fundraising campaign that brought in money from around the world, the damaged structure was laboriously rebuilt, brick by brick. It reopened in 2005 before a joyous crowd of 250,000 people, a symbol of a reunified Germany and the healing of wounds between nations once at war. 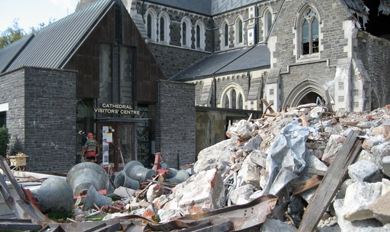 It’s interesting how churches can have such symbolic importance, even in our post-modern age. The medieval model in which the cathedral was the heart of a city has long withered, but sometimes a disaster like that in Christchurch reveals that churches still have a presence greater than their physical structure. These buildings stand with quiet dignity, havens of calm and peace in the midst of the bustle of contemporary life. While most passersby rarely step foot inside their doors, such sanctuaries nevertheless exude a quiet power. And if such landmarks are destroyed, there remains a gaping hole that cannot be filled by just another building made of steel or concrete.

New Zealand’s Christchurch Cathedral was deconsecrated on Nov. 9 in a service that prepared the way for demolition crews to take down its damaged walls. Cathedral officials say that the church will be rebuilt, though the new structure will not simply be a reconstruction of what existed before. Instead it will combine old and new elements to reflect a re-born Christchurch and a revitalized parish, blending design elements of white New Zealand and Maori New Zealand just as the New Zealand Prayer Book so beautifully blends elements from the two cultures.

I have stood in awe before the rebuilt Frauenkirche in Dresden, marveling at how its walls incorporate aged, darkened bricks and newer, paler ones in a seamless intertwining of past and present. On top of the church is a golden cross given by the people of Great Britain and crafted by the son of one of the pilots who bombed Dresden in 1945. It bears this message: “Build bridges—Live Reconciliation—Bolster Belief.”

Christchurch Cathedral was destroyed not by human agency, but by geologic forces. But like the Frauenkirche, its rebirth has global significance, particularly for those of us who are members of the Anglican Communion.

“With the bread we need for today, feed us,” reads a version of the Lord’s Prayer from that volume. “In the hurts we absorb from one another, forgive us. In times of temptation and testing, strengthen us. From trials too great to endure, spare us.”

One day, we pray, these words will once again be said in Christchurch Cathedral.

Lori Erickson writes about inner and outer journeys at http://www.spiritualtravels.info/.  She serves as a deacon at Trinity Episcopal Church in Iowa City, Iowa.