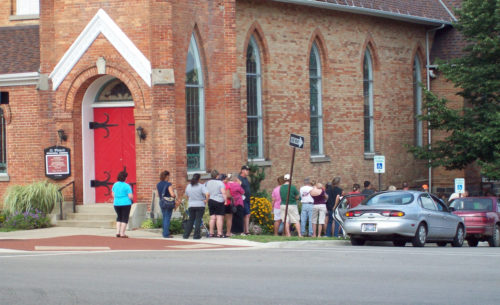 [Episcopal News Service] The parking lot fills quickly on Tuesday afternoons at St. Timothy’s Episcopal Church in Brookings, Oregon as dozens of hopeful residents line up, take a number and wait their turn to see a doctor or other health-care provider.

“People can take a number, come eat lunch, and that’s the order in which we treat people” at the church’s free medical clinic and soup kitchen, said the Rev. Bernie Lindley, St. Timothy’s vicar, during a recent telephone interview from the church.

Just about 18 months old, the clinic is open from 1 to 4 p.m. on Tuesdays and has treated more than 575 patients, mostly the uninsured employed, some who live as far as 60 miles away, said Lindley.

Like many other church-initiated free medical clinics across the country, St. Timothy’s began its outreach ministry “as a response to what we saw as a tremendous amount of need; we just didn’t know how we could respond until the opportunity presented itself,” Lindley said. The nearest hospital is at least 30 miles away, he added.

At least a dozen Episcopal congregations throughout the country are meeting community needs by offering physical space, coordinating local resources, securing grant money and recruiting volunteers, and providing free medical services to the uninsured, according to Matthew Ellis, executive director of the National Episcopal Health Ministries.

“For many, the lack of appropriate health insurance prevents them from addressing important health care needs; in these instances, faith-based health clinics may be one of the only options available,” Ellis said in a recent email to ENS. “Ministering to the sick is a fundamental ministry of the church, and it is heartening to see so many of our parishes addressing this critical need.”

Historically Brookings, located about five miles north of the California border, was a timber town; the plywood mill its largest employer. Now, unemployment hovers at about 10 percent, more than half of the area’s 14,000 residents are retired and most of the clinic’s patients work in service sector, minimum-wage positions without health insurance, according to Lindley.

“Everybody thinks it’s the guy panhandling on the corner or living under the bridge that needs us, but a lot of the people we see are partly employed or recently unemployed,” he said.

Another misconception, say Lindley and other clinic providers, is that it takes a large or wealthy congregation to start a free medical clinic.

With an average Sunday attendance of about 60 and a $58,000 annual budget, “the congregation doesn’t have tremendous resources,” Lindley said. They have expanded services to include a dental van, long-term mental health counseling, prescription assistance and numerous 12-step programs.

“What we do have is the willingness to say yes to people who have a sense of social justice and who want to do ministry and to reach out to others within our community.

“It’s very important we don’t exist for our own purpose. We need to exist for the betterment of the community,” he said.

St. Peter’s Clinic in Hillsdale, Michigan, is another example of a small congregation serving up hope in huge doses.

While average Sunday attendance at St. Peter’s Episcopal Church is about two dozen, its free medical clinic operates with about six times that many volunteers. There are doctors, physicians assistants, nurses, pharmacists, medical assistants, receptionists “and lay people of all kind,” said Jill Pavka, a retired nurse and the clinic’s executive director. There are about 120 active volunteers, she added.

“They come from all over the community, they’re all different faiths or no faiths. It’s a huge mix of people who come here because they believe in the mission and what we do,” she added.

On Tuesday evenings, the parish hall converts to a waiting room and the church basement becomes exam rooms. It takes about 24 people to staff the clinic, which averages about 60 patient visits per week, Pavka said.

“We open our doors at 5 p.m., and many of them come straight from work,” she added.

Terry Smith, 55, a resident of Reading, Michigan in Hillsdale County has been a regular clinic patient for the past two years.

“Without the clinic,” she said emphatically in a recent telephone interview, “I’d be a dead duck.”

The manicurist and mother of three developed diabetes two years ago. Through the clinic she receives medicine to regulate her blood pressure and cholesterol, and to treat her diabetes. She also receives the supplies she needs — a meter and test strips to monitor her blood glucose level three times daily.

“My sugar is perfect now, but I do cheat once in a while,” said Smith, who also attends a monthly group at the clinic that offers education, awareness and support. “I know what can happen, you can go blind, or lose your feet. Diabetes does a lot to you if you don’t take care of your body,” she said.

Employed full-time, Smith has no health insurance. “The economy has hit me so hard,” she said, calling health insurance “a luxury, so most people have had to give it up because of the economy.”

“I don’t make enough to go pay a regular doctor or to pay my own insurance, so I’m forced to come here,” she said.

But, she added: “It’s wonderful, because you don’t have to worry. They don’t make you feel like a piece of dirt because you have to come here, because you can’t help it.”

Area unemployment surged in the community of about 40,000 after the auto industry tanked, according to Pavka. Manufacturing, tool and die and automotive-supply businesses “lost over 2,000 jobs in a two-year period of time,” she said. The unemployment rate is about 15 percent.

“The people we see are the new poor, who had good jobs. They were making $12 to $20 per hour, decent money for a rural community like this, they had great benefits,” she said. “Then all of the sudden they found themselves with nothing.”

To be eligible for the clinic’s services, patients must be uninsured with an income level at 200 percent of the federal poverty level, or about $44,700 annual income for a family of four. The clinic does not treat children, but they receive medical coverage under state programs. People 64 years and older typically can access Medicare.

The number of patients visiting the clinic has increased each year since it opened in 2002.  All told, volunteers have handled more than 21,000 patient visits and dispensed $6.37 million in prescription medication, Pavka said. Although the clinic’s focus is on chronic disease management, acute care and providing medications, there has been an increase in patients with multiple health issues, she said.

In 2009 (the latest year for which the statistics are tallied), the clinic referred 232 patients to other doctors, including surgeons, orthopedic surgeons and dentists. Ophthalmology and podiatry services are also available, along with a monthly diabetic clinic, depression support and weekly smoking-cessation groups.

With an annual budget of $140,000, most funding comes from private donations, as well as the Diocese of Michigan’s social ministry fund and grants through health-insurance provider Blue Cross Blue Shield of Michigan.

Still, Pavka is aware of a pressing need. “I’d love to find a way to serve the people we’re missing during the day,” she said, noting that people who work in the evening cannot come to the clinic.

Linda Cosier, 62, a licensed practical nurse who volunteers at the clinic, said she’s been surprised at how much she receives in turn from patients. “Anyone who volunteers broadens themselves and becomes a lot better person,” she said. “Every Tuesday night we all learn from somebody who comes to the clinic asking for help.”

A free medical clinic begun by a nearby congregation of about 40 people inspired St. James the Less Church in Ashland, Virginia, in 2006 to start its own clinic in the church basement, according to Lee Chambers, clinic board president and volunteer.

The clinic has since expanded to include five separate locations in various churches, not all of them Episcopal, he said. “The demand exceeded the room we had at St. James and we had to move,” he said. “For example, we didn’t have enough room to put a chair in for the optical clinic, which requires a whole room. So we started looking for other space.”

Patients must be uninsured residents of Hanover County, Virginia, with income 150 percent of the current federal poverty guidelines.  But, “if you’re 66 and come in for glasses, obviously Medicare doesn’t pay for that,” said Chambers.

Chambers finds volunteering extremely satisfying. He maintains equipment and registers patients for the dental clinic. In some instances, lives are changed, even saved, he said.

“We have people who work at WalMart loading and unloading boxes,” he said. “When they get their teeth they say, ‘now I can get a promotion and work out front at the cash register and smile at people.’ It’s a great mission, a very great mission.”

Another patient arrived with dangerously high blood pressure. “We don’t treat emergencies,” he said. “We immediately called the rescue squad; they took her to the hospital. She told us later the hospital said if we hadn’t reacted the way we did, she would have died. That visit changed her life.”

Chambers hopes churches will consider tackling issues of the body, as well as the soul. The need for health education is so great that “even if churches don’t want to start up a free clinic, they could at least start with a series of seminars and see where that leads.