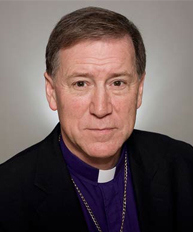 [Anglican Journal] Canadians need to shoulder their share of responsibility for addressing climate change, says the primate of the Anglican Church of Canada. After all, points out Archbishop Fred Hiltz, Canada is one of the world’s largest per capita emitters of greenhouse gases.

In a statement issued during the final week of the 17th Session of the U.N. Conference on Climate Change in Durban, South Africa, Hiltz expresses concern that “not enough action is being taken by developed countries” to address climate change. He urges Canadian Anglicans to join him in praying that the conference will produce actions that “represent real commitment on the part of developed nations and real hope for those most adversely affected by the impacts of climate change.”

On Dec. 6, U.N. Secretary General Ban Ki-moon declared that a binding climate change agreement appeared to be “beyond our reach – for now.” He blamed “grave economic troubles” and “conflicting priorities and strategies for responding to climate change” for the slow progress of the talks.

In South Africa, Anglican Archbishop Emeritus Desmond Tutu has called for rich nations to think about the consequences of climate change on the world’s poor. If global temperatures continue to rise, he said, Africa “faces a range of devastating threats.”

The full text of Hiltz’s statement is available here.