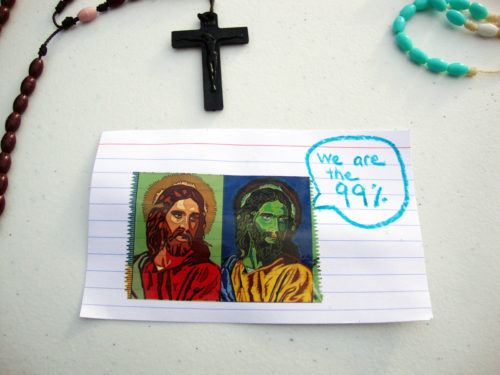 [Episcopal News Service] Seminarians in Austin, Texas, are “taking the gospel to the streets” as an interfaith chaplaincy ministry to those participating in Occupy Austin.

“I am proud of the campus chapter of the Episcopal Peace Fellowship (EPF) at the Seminary of the Southwest. They are taking the gospel to the streets and exemplify the growing influence young adults are having in our nationwide social justice work,” said the Rev. Jackie Lynn, EPF executive director.

Several seminarians – some donning monkish robes – went to the downtown Austin Occupy site the Monday before Thanksgiving to pass out food and pray with the occupiers. Their first weekly Sunday prayer service was held at the site six days later.

The Episcopal Peace Fellowship’s website – www.epfnational.org – has an article written by Erin Warde, a seminarian from the Central Gulf Coast, about her group’s first day in Occupy Austin.

“Using the diocesan-supported Occupy chaplaincy in Boston as an example, I thought our EPF chapter on the seminary campus could prayerfully participate in Occupy Austin,” said Jessie Vendati, chapter president, member of the EPF’s national executive council and third year divinity student from the Diocese of Olympia.

“Many seminarians began talking on campus about the church’s role in economic and social justice and we welcome students from other Austin seminaries, as well as the wider faith communities in Austin,” said Vendati, who was a Catholic Worker in Tacoma, Washington, before entering seminary in Austin.

While Union Theological Seminary in New York City supported its students participating in Occupy Wall Street, Seminary of the Southwest is “the first Episcopal seminary to take part in the Occupy Movement,” Vendati said. “Many faculty and our academic dean have been very supportive as we honor the legacy of our seminary’s founder.”

The late John E. Hines, elected presiding bishop of the Episcopal Church in 1964 and a compelling advocate for racial and social justice, founded the Episcopal Theological Seminary of the Southwest when he was suffragan bishop of Texas after World War II. “A leader of iron nerve, integrity and conviction, [he] courageously guided his church through a turbulent decade,” wrote the Rev. Ken Kesselus in his book John E. Hines – Granite on Fire.