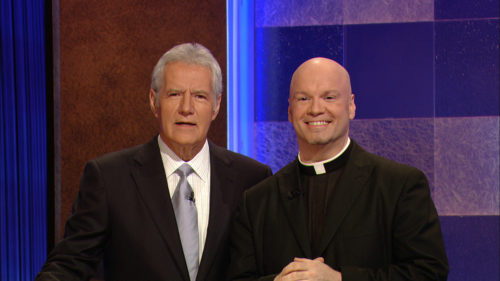 [Episcopal News Service] The Rev. D. Scott Russell, Episcopal Church chaplain at Virginia Tech, learned a few things during the journey that brought him to a recent appearance on the television quiz show “Jeopardy.”

The pressure of nine million people watching you bet your knowledge against two other players can make 30 minutes pass like 30 seconds, and the bright studio lights can erase short-term memory.

If you take the often-given advice to try to beat your competitors and buzz in first to win the right to answer, “you have to have the right answer.”

At the same time, you have to “be in the moment and be present and not fall apart.”

Also, Russell learned, “I don’t know that I have the killer instinct” needed to win.

And, if you come in third and you are wearing a clerical collar, Russell said, you learn to be a “gracious loser.”

“It was a privilege to get as far as I did,” Russell told Episcopal News Service about his Dec. 5 appearance, adding that the other two contestants he face were “academically inclined and they really out-competed me.”

Russell matched his knowledge against Brandon Barnwell, a linguistics graduate student at University of California-Santa Barbara, and Bhibha Das, a post-doctoral researcher in physical activity and public health at University of Illinois at Champaign-Urbana. Das won in part by betting all the money she had accumulated on a Daily Double answer and then asking the correct question.

To play the game, which has been on television since 1964, contestants are presented answers in one of six subject categories and they must respond in the form of a question. Contestants earn money based on the dollar amount assigned to each answer.

Russell, associate rector at Christ Church in Blacksburg, Virginia and campus minister at Virginia Tech’s Canterbury House, earned his spot on the show by first doing well on Jeopardy’s online test. He was then invited to a regional contest.

Russell learned that the show producers aren’t just interested in the fact that all his life people have been telling him he is so good at trivia games that he ought to be on Jeopardy. The producers “want to make sure you’re fun and engaging, and that you’re not just some trivia nerd,” he said.

The show doesn’t keep track of how many ordained ministers or member of religious orders have appeared on the show, but Russell said that during his journey to Jeopardy he ran into another ordained Episcopalian who fit the “fun-and-engaging” and “not-a-trivia-nerd” criteria. When he was in Washington, D.C., for the taping of the regional contest, Russell said, he chanced upon Diocese of New Hampshire Bishop Gene Robinson, who told him he had been a Jeopardy contestant years ago.

“He didn’t win either,” Russell said with a chuckle.

Many contestants Russell met had come to Hollywood with big dreams for their potential winnings. For instance, Russell said, one wanted to win enough to re-open her grandfather’s candy store. Had Russell won, he said, his aim was to pay off his student loans.

He may have placed third, but Russell still went home with some money. Second- and third-place contestants receive $2,000 and $1,000. Russell said his winnings covered his Hollywood trip expenses with a little left over.

Russell wrote Dec. 6 about his experience in a blog post titled “I’ll take ‘It’s Harder than it Looks’ for $2000, Alex!”