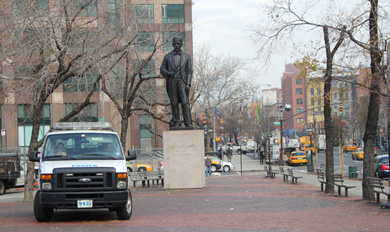 On the morning of Dec. 5 Duarte Square, a City of New York park at Sixth Avenue and Canal Street stood empty save for a single woman sitting on a park bench and an NYPD van parked opposite a bronze statute of Juan Pablo Duarte. ENS Photo/Lynette Wilson

[Episcopal News Service] Supported by members of the faith community, Occupy Wall Street is calling upon Trinity Episcopal Church, Wall Street, in New York to allow protestors to establish a winter camp at property it owns at Sixth Avenue and Canal Street, about a mile north of the movement’s original encampment at Zuccotti Park in Manhattan.

Trinity released a statement on its website offering its continued support of the movement – including providing meeting space at church buildings – but not the use of its enclosed vacant lot at the city-owned Duarte Square that it leases to the Lower Manhattan Cultural Council. The property, Trinity said, is unsuitable “for large-scale assemblies or encampments.”

On Dec. 5 Duarte Square stood empty save for a single woman sitting on a park bench and an NYPD van parked opposite a bronze statute of Juan Pablo Duarte, who led the Dominican Republic in its 19th-century struggle for independence from Haiti.

One day earlier, three OWS participants staging an overnight protest and hunger strike aimed at pressuring the church to let the Occupy movement set up camp on its property, were arrested, released and later returned to the area, according to news reports.

George Packard, retired Episcopal bishop for the armed forces and federal ministries, has been mediating between OWS representatives and Trinity staff.

Packard said he would like to see Trinity make the space available during the winter for the protestors, who say they need to a space to “occupy” in order to build their community and carry their movement forward.

Negotiations are complicated by past events, including the arrest of protestors who broke into the locked and fenced space at the square Nov. 15 while other OWS members were meeting with Trinity about possible use of the space, Packard said. “I’m trying to get one group to acknowledge the other and put salve on hurt feelings and re-establish relationships.”

Trinity is concerned about its lease arrangements for this site and others, he said. “They’ve got some pride in being honorable, and I think they feel that they are trying to do the best by the lease-holders that they are in relationship with,” said Packard.

In its statement, Trinity affirmed “the right of peaceful protest” and noted that it had “provided meeting and gathering spaces as well as a tranquil place at church facilities in and around Wall Street.

“Thousands of protesters use these facilities every week,” it said. “However, the enclosed lot at Duarte Square is not available nor is it suitable for large-scale assemblies or encampments. It has no facilities and is licensed to the Lower Manhattan Cultural Council for interim outdoor art exhibits which will resume in the spring.

“Trinity supports the vigorous engagement of the issues Occupy Wall Street has raised. However, we do not condone breaking the law. We will continue to extend our hospitality to protesters and all who come to our church properties during open hours.”

OWS protestors and some religious leaders have urged the church to reconsider.

Trinity “helped us from the beginning,” OWS member Zak Solomon said at a Dec. 3 rally, citing the church’s provision of Charlotte’s Place and other Trinity building facilities for respite, bathroom facilities and meeting space. “They’ve been nice. We want more. They say, ‘Ask and you shall receive.’ I’m asking you. Receive me. … We need that space.”

“We need this space, too,” he said, referring to Zuccotti Park, start of the movement’s formal launch Sept. 17, from which protesters were evicted Nov. 15 and subsequently forbidden from staying overnight.

Solomon, along with Packard and Pulitzer prize-winning author and journalist Chris Hedges, were among the speakers at an event at Zuccotti Park – referred to as “Liberty Square” – to “rally around Occupy Wall Street’s immediate need for spaces to continue organizing for social and economic justice,” according to a Dec. 2 press release from Occupy Faith NYC, an interfaith coalition of faith leaders, including Episcopalians, supporting OWS. The event also celebrated the launch of Tidal, “a journal of occupation theory from the Occupy Movement.”

A video showing the Trinity property and scenes from the rally can be seen here.

Packard’s first contact with OWS was periodically providing jugs of water from Costco for protestors. Late one night, he was wearing his clerical collar and dropping off water for the kitchen “working group” at Zuccotti Park when a police officer detained and nearly arrested him. In that moment, he said, “I was converted from a casual observer to a committed supporter of this movement. I think these young people are onto something. I think there is an anger in all of this for justice, that aches for some justice.”

“Something clicked in me” that night, he said. “These kids aren’t being heard. … This is no unemployed bunch of deadbeats. These are folks who are focused about the lack of fairness and equity and the ache for justice.”

Packard subsequently became involved with the movement’s direct action working group and began fostering negotiations between protestors and Trinity about the Duarte Square property. He also agreed to speak at the Dec. 3 event, scheduled as an Advent service.

One of the challenges of working with the movement, he noted, is that it is organized into working groups but lacks a traditional formal leadership structure. Events can be changed by group consensus. So he and the Rev. Michael Ellick, an Occupy Faith leader and a minister at Judson Memorial Baptist Church, only learned about the planned hunger strike the morning of Dec. 3. After meeting the strikers, Packard said, “I definitely got the impression that this was kind of an impromptu thought.”

Within Occupy Faith, there were differences of opinion about the hunger strike, said the Rev. Donna Schaper, senior minister at Judson.

During the live-streamed rally, she quoted the Rev. Martin Luther King Jr.’s letter from the Birmingham Jail: “Too many clergy hide behind the anesthetizing security of stained-glass windows.”

“There is no security hiding behind stained-glass windows or phony security,” she said. “Our only security is in the world beyond surveillance, beyond injustice, after democracy returns to our political economy. Let’s open up.”

Schaper’s church housed protestors for five nights after the Nov. 15 evictions but then stopped, although its board will re-evaluate that decision Tuesday night, she said in a Dec. 5 interview with ENS. The church lacks a kitchen, and “the policing and the cleaning were overwhelming,” she said. “At the moment, we are open all day long, and we have occupiers on every plug.” Their 500-seat meeting room also is “used constantly.”

“We have taken the position that we’re better off being a day shelter,” she said.

“I think a lot of churches are discussing” whether and how to open their spaces to the movement, she said.

As she outlined in a Religion Dispatches column, Schaper has changed her view on the need for OWS to “occupy” outdoor space.

“The Occupy movement is saying that it wants outdoor space where everybody can be together, and we [in Occupy Faith] are supporting that request. We are urging, especially, Trinity to open that space,” she said. OWS is “arguing that one of the effects of the unjust economy is that there’s no public spaces, that more and more space has been privatized … They are really making the argument that their larger claims of economic justice are directly related to privatized space.”

“The movement is really saying, ‘We need space to develop our community’ – their language is ‘appear’ to each other – and I think it’s really important,” she said.

At the same time, she and other members of Occupy Faith are collecting signatures – 150 so far by the afternoon of Dec. 5 – for a letter calling on New York Governor Andrew Cuomo to extend a “millionaires tax” in the state. According to a New York Times report, Cuomo has “called for ‘comprehensive reform’ of New York’s tax code that would mean higher tax rates for the wealthy and a tax cut for the middle class” and is expected to call the state legislature back into session to consider the plan.

“This is the first political victory, just getting him to open it up … You just don’t call the New York State Legislature back in December,” Schaper said. “We have a lot of people jumping on that bandwagon. … I don’t think it would be happening without Occupy. It’s just been great that Occupy has created energy that wasn’t there before.”

Inspired by the Arab Spring movement, OWS protests against greed and economic inequality have spread to more than 2,500 locations across the country and around the world. In recent weeks, officials in many cities have moved to dismantle protest encampments.

“A lot of occupiers all across the world want their spaces back and want new spaces,” said a protestor named Laura who read a “proposed national call to reoccupy” during the Dec. 3 rally, her comments passed back through the crowd in OWS’ “human mic” process.

On Dec. 17, she read, “we call on displaced occupations across the nation to reoccupy outdoor places.

“The Occupy Movement is more powerful than ever. Despite a violent and systematic wave of eviction enacted by mayors who fear the power – our power – of open and visible dissent, public occupation, free speech and open assembly are the greatest threats to the increasingly repressive and unjust status quo. Therefore, we call on occupiers to establish new occupations in parks, in plazas, in public spaces around the country to show the world a visible alternative to the economic and social justices of our current society.”

—Sharon Sheridan is an ENS correspondent. Lynette Wilson, ENS editor and reporter, contributed to this article.