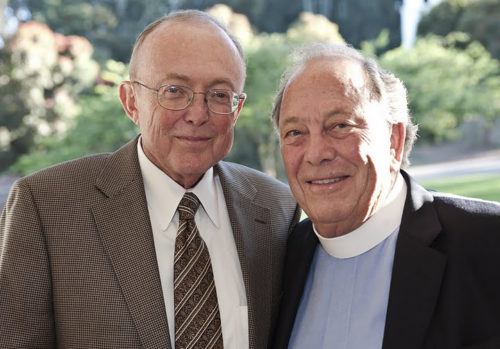 The Rev. Bill Rankin, left, co-founder and CEO of GAIA, recently was lauded at a retirement event for his work against AIDS, malaria and poverty in Malawi. The Rev. Canon George Regas, right, rector emeritus of All Saints Church, Pasadena, California, where Rankin once served, was among the speakers at the event, held at the Presidio in San Francisco. Photo/Jennifer Leigh Sauer

All three have been moved by the plight of the impoverished African nation of Malawi, where more than 50,000 people die each year due to AIDS, and 650,000 children are AIDS orphans.

But of the three, only Rankin has made Malawi his life’s work for the past decade.

Rankin, CEO of the Global AIDS Interfaith Alliance (GAIA), retired November 1 at age 70, but not without fanfare. And he intends to continue at GAIA quarter-time as a volunteer.

At farewell events in Pasadena, California, San Francisco and Purchase, in Westchester County, New York, fellow Episcopalians and other supporters gathered to honor Rankin’s leadership and to hear about GAIA’s progress and future work. The organization provides basic health services, targeting prevention, care and support in communities affected by HIV/AIDS, TB and malaria.

On Sept. 25 at the historic Athenaeum in Pasadena, the Rev. Dr. George F. Regas, now director of the Desmond Tutu Foundation, described how Rankin had come to work with him in the 1970’s at All Saints, Pasadena, one of the largest Episcopal churches in America, where Regas served as rector for 28 years.

“Bill has always been a peace-and-justice guy,” Regas said, and went on to tell the story of Rankin’s drive to co-found GAIA in 2000, having learned that administering just $1 worth of medicine could generally prevent a baby born to an HIV/AIDS infected mother from getting AIDS. “Bill has enabled so many people to be healers and inspired us to be an instrument for renewed life,” Regas said.

In Malawi, Rankin is trying to accomplish “less suffering for the blameless,” Regas said, adding that Rankin shows GAIA donors “the healing power of financial responsibility, and how to release our grip on our money” in a “crassly materialistic world.”

On the crystal-clear afternoon of Sept. 27 at the Golden Gate Club in the Presidio, San Francisco, Rankin was again honored.

Joining Regas on the podium was Dr. Paul Volberding, professor and vice chair of the Department of Medicine and director of the Center for AIDS Research at the University of California, San Francisco (UCSF).

Volberding, describing AIDS as “the largest epidemic in human history,” reported thrilling progress in the fight against AIDS: “In the US, maternal transmission of AIDS to her fetus has almost completely stopped.” Prevention is more and more possible: women can use anti-viral gels or rings internally to greatly reduce the chance of transmission. Additionally, if those with AIDS are take anti-viral drugs, transmission rates fall drastically.

Rankin himself then spoke, contrasting this optimistic situation in the US to that in Africa, where for every two people who are diagnosed and treated for HIV/AIDS in Malawi, three are newly infected. The average income there is $326 per year, not sufficient to buy AIDS drugs. Malaria is the biggest killer of children under 5 and only half the villages have potable water. However, GAIA has provided hope, village by village in the most rural areas, employing illiterate and semi-literate women to be caregivers to those with HIV/AIDS, and encouraging other villagers to be tested, for example.

Board chair Marty Arscott announced at the San Francisco event that GAIA has chosen Todd Schafer to succeed Rankin as CEO. Schafer comes from Christian Aid, a large British international development agency, where he was most recently stationed in Central Africa. Schafer said it was daunting to think about being Rankin’s successor, “but the board emphasized that he was not expected to fill Rankin’s shoes, but was called instead to walk the next part of the path for the good of the people of Malawi.”

“I’ll never forget the first Discovery Hour at St. Luke’s where Bill was the speaker,” Anderson said. “He’d given his presentation about the insidious scourge of AIDS and the great need in Malawi, and a woman raised her hand and said, ‘How can we help?’ And Bill didn’t pause for a moment. He said, ‘Give money.’ After an awkward pause he added, ‘I wish I could tell you that by flying to Lilongwe [the capital of Malawi] you can help these people, but the truth is, 95 cents buys one dose of the anti-retroviral that can prevent transmission of AIDS from a mother to one baby, one life, one soul. Please give us the 95 cents.”

Anderson continued, “Most NGO’s [non-governmental organizations] come into places like Malawi and say, ‘We know what you need, so sit still while we give it to you.’ But Bill came into every village and just listened. In one village, for example, he learned that the reason the girls weren’t going to school was that they didn’t have underwear – and they were embarrassed and they got teased or shamed by the boys. So Bill bought them underwear. He listened.

“Bill taught all of us how to care – for one person. He never let the sheer numbers daunt him – the millions suffering from this, the thousands with that. He understood that when we act in faith, when we seek simply to serve, then we can do simply what lies at hand, what God enables us (by grace) to do – small though it seems. We’re saved from the messiah-complex, where we have to save the world … We learn, like Mother Teresa who said, ‘We cannot all do great things, but we can do small things with great love.'”

Kaboni Gondwe, a young Malawian woman who was orphaned as a child and suffered from recurring malaria, told the gathering that she dreamed of becoming a nurse but had no resources, until learned about GAIA. “I am here to tell you that GAIA has made a huge difference in my life and so many others,” she said. “As you have seen tonight, GAIA focuses on caring for orphans, empowering women and building healthcare capacity. I represent all three of these areas.”

She then paid tribute to Rankin. “Bill is an understanding and caring person. He loves the people of Malawi. He was quick in responding to my request for a scholarship. He has worked tirelessly in promoting lives of women in Malawi. To so many student nurses and people he will always be a hero.”

Gondwe is now pursuing a master’s degree in nursing administration at Ohio University on a Fulbright scholarship. She plans to return to Malawi when she completes her schooling.

During his 11-year tenure as CEO, Rankin has helped raise more than $16 million. Due to its excellent track record, GAIA has been granted funding from the United States Agency for International Development, the Elizabeth Taylor HIV/AIDS Foundation, the Westly Foundation, and The Hamels Foundation, and the support of actors Martin Sheen, Jane Kaczmarek, and Rainn Wilson.

With the help of the Bill & Melinda Gates Foundation and backed by a medical advisory board, GAIA’s strategy is to put rural Malawi into the hands of Malawi women, providing nursing scholarships for young women, orphan care programs to keep children nourished and educated, mobile health clinics that reach the most remote patients and micro-loans for women entrepreneurs.

Bill Rankin knows that anti-viral medications are at the crux of Malawi’s survival, and he worries that global aid may not come through as promised. “The possibility of these medications suddenly not being available is too grim to contemplate,” Rankin says. “Maybe a small part of us is made well because we stand by Malawi’s children, today and tomorrow and for a thousand tomorrows.”