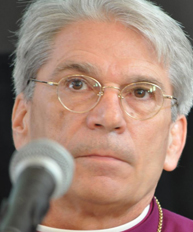 The Episcopal Church’s Disciplinary Board for Bishops Nov. 28 said it cannot certify that Diocese of South Carolina Bishop Mark Lawrence has abandoned the communion of the church.

“Based on the information before it, the board was unable to make the conclusions essential to a certification that Bishop Lawrence had abandoned the communion of the church,” the Rt. Rev. Dorsey F. Henderson Jr., board president, said in a statement e-mailed to Lawrence and reporters. (Henderson said he informed Lawrence of the board’s conclusion by telephone as well.)

The board met Nov. 22 via conference call to consider information given it by a group of communicants in the diocese.

“Applied strictly to the information under study, none of these three provisions was deemed applicable by a majority of the board,” Henderson said in his statement.

In the Nov. 28 statement, Henderson said that the disciplinary board faced what he called a “basic question” of “whether actions by conventions of the Diocese of South Carolina, though they seem — I repeat, seem — to be pointing toward abandonment of the church and its discipline by the diocese, and even though supported by the bishop, constitute abandonment by the bishop.”

“A majority of the members of the board was unable to conclude that they do,” Henderson said.

Henderson, the retired bishop of Upper South Carolina, noted that it is “significant that Bishop Lawrence has repeatedly stated that he does not intend to lead the diocese out of the Episcopal Church — that he only seeks a safe place within the church to live the Christian faith as that diocese perceives it.”

“I speak for myself only at this point, that I presently take the bishop at his word, and hope that the safety he seeks for the apparent majority in his diocese within the larger church will become the model for safety — a “safe place” — for those under his episcopal care who do not agree with the actions of South Carolina’s convention and/or his position on some of the issues of the church.”

Lawrence said Nov. 29 that the board’s statement “leaves many questions unanswered” but that “it appears to read like a complex statement of a complex decision in a complex time within a complex church.” Nevertheless, he said, he “[believes] it is best to take it at face value.”

Lawrence told the diocese Oct. 5 that he was being investigated for abandonment. Presiding Bishop Katharine Jefferts Schori and the House of Bishops were not involved in making the claims, Henderson said at the time via a “fact sheet.”

The package of documents alleging his abandonment of the church that Lawrence said he received Sept. 29 from Henderson, is posted here on the diocese’s website. The documents contained 12 allegations of when Lawrence’s “actions and inactions” sought to abandon the doctrine, discipline and worship of the Episcopal Church.

Those allegations cited five specific diocesan convention resolutions that Lawrence supported. In addition, the allegations also claimed that Lawrence has removed all references to the Episcopal Church from the diocesan website and noted that half of the congregations with working website have done the same or offer links to breakaway Anglican organizations.

“The bishop appears to have done nothing to stop other parishes which are outwardly moving in the direction of withdrawal” from the Episcopal Church, including parishes that have sought or obtained legal advice on those moves, allegation seven said.

Three allegations referenced comments made by Lawrence about what he calls the Episcopal Church’s “false gospel of indiscriminate inclusivity” and his description of the church as a “comatose patient” that has slowed down Anglicanism in the 21st century.

It is also alleged that missions are being planted in the diocese but Lawrence has not recognized “a congregation of loyal Episcopalians” as a parish or mission.

The 12th allegation surrounded the circumstances of the ordination of Lawrence’s son.

The diocesan leadership has engaged in a series of moves to distance itself from the Episcopal Church, ultimately stemming from disagreements over human sexuality issues and theological interpretation. In October 2009 the diocese authorized Lawrence and the Standing Committee to begin withdrawing from churchwide bodies that assent to “actions deemed contrary to Holy Scripture, the doctrine, discipline and worship of Christ as this church has received them, the resolutions of the Lambeth Conference which have expressed the mind of the communion, the Book of Common Prayer and our Constitution and Canons, until such bodies show a willingness to repent of such actions.”

That authorization came in response to two General Convention resolutions passed two months earlier that focused on human sexuality and reaffirmed the Episcopal Church’s commitment to the Anglican Communion. Resolution D025 affirms “that God has called and may call” gay and lesbian people “to any ordained ministry in the Episcopal Church.” Resolution C056 calls for the collection and development of theological resources for the blessing of same-gender blessings and allows bishops to provide “a generous pastoral response to meet the needs of members of this church.”

In his Nov. 23 interview with the Living Church Lawrence said that provision gave permission to bishops to act contrary to the Episcopal Church’s canons, its prayer book, church history and the church’s historic teaching on marriage.

In October 2010, the South Carolina convention approved six resolutions in response to General Convention’s 2009 passage of revised Title IV canons on clergy discipline, according to an explanation posted on the diocese’s homepage before the convention. The convention met again in February 2011 and passed two of those resolutions again as required, amending the diocesan constitution to remove the accession clause to the canons of the Episcopal Church and to enable the convention to meet more frequently than annually. The diocesan said at the time that the resolutions were meant to “protect the diocese from any attempt at un-constitutional intrusions in our corporate life in South Carolina.”

At Lawrence’s direction, Diocesan Chancellor Wade Logan Nov. 16 sent a quitclaim deed to every parish in the diocese. A quitclaim deed generally transfers ownership of the property from the party issuing the deed to the recipient.

“For 190 years (1789-1979) there had never been any idea that somehow the parishes did not completely and fully own their property,” Logan said in his letter posted here. He said the diocese could issue quitclaim deeds because the state Supreme Court has said that the 1979 passage by the General Convention of the so-called Dennis Canon was not binding on the parish of All Saints, Pawley’s Island, South Carolina.

The “Dennis Canon” (Canon 1.7.4) states that a parish holds its property in trust for the diocese and the Episcopal Church.

Logan said in his Nov. 16 letter to parishes that removing the accession clause was part of the “continued pursuit of our historic unity based on common vision rather than legal coercion.”

The quitclaim action was not included in the original material submitted to the board.

Lawrence told the Living Church on Nov. 23 that he issued the quitclaim deed in part because “the threat of property disputes” should not be “the only thing that holds us together.”

Lawrence said that when he awoke the day after having decided to issue the deeds he felt that “for the first time, I am the bishop of this diocese.”

The disciplinary board’s investigation of Lawrence appears to be among the first it has conducted. The board was created under the revised Title IV canons on ecclesiastical discipline which went into effect on July 1. The board is made up of 10 bishops elected at any regularly scheduled meeting of the House of Bishops, and four priests or deacons and four lay persons initially appointed by the president of the House of Deputies with the Executive Council and thereafter elected by the House of Deputies. Henderson noted in his fact sheet that the board “operates confidentially.”