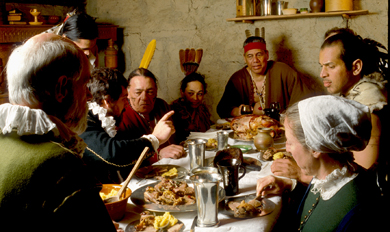 Plimoth Plantation is a living history museum in Massachusetts that recreates the 17th century world of the Pilgrims and the people of the Wampanoag nation who were their neighbors. Photo/Plimoth Plantation

[Episcopal News Service] As Thanksgiving comes around once again, I find myself thinking of a visit I made this past summer to Plimoth Plantation, a living history museum in Massachusetts that recreates the seventeenth-century world of the Pilgrims and the people of the Wampanoag nation who were their neighbors. According to tradition, our Thanksgiving holiday has its roots in a harvest feast celebrated by these two groups in 1621.

Plimoth Plantation tells the story of the first Thanksgiving in an exhibit that also describes the centuries of myth-making that have followed the feast. The little we know of it comes from a letter dated 1621, which says that the English colonists marked their first harvest “by rejoicing in a special manner.” They were joined by at least 90 Wampanoag, who came to the tiny English settlement for three days of feasting. We know that at the time relations between the two groups were wary but cordial, and that the colonists had likely survived only because of the help of Indians who had taught them planting and hunting techniques suitable to an unfamiliar land.

It’s intriguing to think of being an observer at that first Thanksgiving. For the colonists, the celebration marked the end of a perilous and exhausting year that included the long journey from England, their arrival at the start of a harsh winter, and their struggle to build shelters and plant and tend crops. There must have been relief and worry in equal measure at that first feast, as the settlers wondered how the next year would go in this new land full of dangers and trials.

The Wampanoag had even more reason to be uncertain about their futures, of course. Their numbers had already been decimated by diseases brought by the Europeans, and the next decades would bring increasingly tense relations with the ever-growing number of colonists coming to their shore. The Wampanoag would suffer greatly in the aftermath of the European incursions into their land.

But the exhibit at Plimoth Plantation shows that despite their many differences, the two groups came together in harmony during that harvest celebration. After all, both cultures had traditions of prayer and giving thanks, and both the English and the Wampanoag had experienced the pangs of hunger often enough to know that a feast was a feast, no matter what the circumstances.

Fast forward more than two centuries to 1863, when Abraham Lincoln proclaimed Thanksgiving as a national holiday to be celebrated each year at the end of November. That first national holiday was celebrated just one week after the dedication of the cemetery at Gettysburg, the occasion at which Lincoln delivered his famous address.

A curious time to celebrate a day of Thanksgiving, one might think, as the nation was still mourning the bloodiest battle of the Civil War. And yet there is a kind of symmetry between the original Thanksgiving and that first national holiday inaugurated during the nadir of the Civil War. The celebrations in both eras were interwoven with fears, uncertainties, and tragedies.

But that’s the way it often is with gratitude, is it not? When we are contented and self-sufficient, being thankful is often an after-thought. It takes difficulties and hardship to make us truly appreciate what we have.

Perhaps that’s a good lesson to be reminded of this Thanksgiving, a time when our nation once again faces uncertain and fearful times. As Americans gather around their tables this week, many of us will talk of our struggles to find work, make mortgage payments, pay bills, and put food on the table for our families.

A Sufi proverb says that “security and health are veils to the divine.” This year that veil has been tattered for many of us, but that means that our gratitude should be all the more heartfelt. Like the colonists and the Wampanoag who feasted together in 1621—or those who celebrated the first national holiday in the midst of the Civil War—we do not know what the future holds. But we can give heartfelt thanks, nevertheless, for all that God has given us, savoring this day, this food, and this time with those we love.