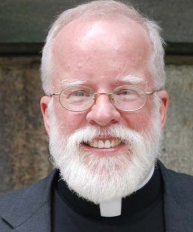 [Episcopal News Service] The Rev. Canon Andrew M.L. Dietsche was elected on Nov. 19 as bishop coadjutor of the Episcopal Diocese of New York, pending the required consents from a majority of bishops with jurisdiction and standing committees of the Episcopal Church.

The election was held during a special convention at the Cathedral of St. John the Divine.

Pending a successful consent process, Dietsche will succeed the Diocesan Bishop Mark S. Sisk, who will retire on or before his 72nd birthday in August 2014.

Dietsche was ordained a priest in 1978. He spent 14 years in parish ministry and the last 10 as the diocese’s canon for pastoral care. He is married to Margaret Mahoney Dietsche; they have two grown children.

The consecration is due to take place March 10, 2012, at the Cathedral of St. John the Divine.

According to a press release from the diocese, Dietsche issued the following statement on the announcement of his election:

“I am deeply honored and humbled by my election today as bishop coadjutor of the Diocese of New York, a diocese I have long ago come to know and love so deeply as canon for pastoral care. I look forward to continuing to serve this community in the years to come in this new role to which I have been called. It has also been a particular pleasure to come to know the other candidates in this election, and I have been blessed to be included in their company. It is a poignant and powerful thing to find that one is the bearer of the hopes of others, and each of us who accepted nomination for this election has had that learning, been lifted up by the love and prayers of many, and felt the weight of that responsibility. I am thankful for each of the candidates with whom I made this journey, and for the faith, courage and grace with which they have adorned our diocese and our election. May God continue to shower them with every blessing.

“I believe that it is especially a privilege to be the church in uncertain times. It is the greatest gift to face challenges which surpass our ability and understanding, for it is only then that we learn what it really means to trust God. We are in a season in which so much of our common life, the life and health of so many churches, and the resources on which our ministries and our mission have depended, can no longer be taken for granted. The particular challenges with which we will contend in this next chapter of our life will test us, but I am certain that, God being our helper, we will prevail over fear and doubt and by the witness of a courageous faith give glory to God.  I thank the clergy and people of New York for inviting me to lead them into that wonderful future, and I ask God’s blessing on this, our great Diocese of New York.”

Dietsche was one of two candidates nominated “from the floor” in addition to the five who were put forward at the end of August by a special Committee to Elect a Bishop, which began work following Sisk’s call for an election at the diocese’s 2010 annual convention last November. The other floor candidate was the Rev. Canon Petero Sabune.

Information about all the nominees is available at here.

The Diocese of New York is composed of 66,000 members in 199 congregations.