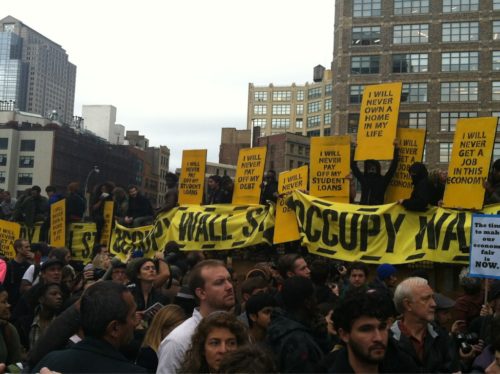 Occupy Wall Street protesters converge on a property partially owned by Trinity Episcopal Church in New York after they were ousted from their former encampment in Manhattan’s Zuccotti Park. Photo/Courtesy of Michael Sniffen

[Episcopal News Service] As Occupy Wall Street (OWS) protestors regrouped after New York police ousted them in a pre-dawn Nov. 15 raid from the movement’s original encampment in Manhattan’s Zuccotti Park, Episcopal clergy and other interfaith leaders in New York continued their support and planned for the future. Efforts included trying to secure meeting space for protestors and lining up shelter for occupiers if they are not allowed to camp in the park.

In a morning press conference, New York Mayor Michael Bloomberg said he authorized the park clearing because of public health and safety concerns and that protestors would be allowed to return but not to camp in the privately owned park.

“Protestors have had two months to occupy the park with tents and sleeping bags. Now they will have to occupy the space with the power of their arguments,” he said.

Clergy leaders who have supported the movement said they were prepared to help protestors to do just that.

“We’ll certainly be having strategy meetings over the next few days,” said the Rev. Michael Sniffen, priest-in-charge of the Episcopal Church of St. Luke and St. Matthew in Brooklyn, New York, who has been involved in the two-month-old movement since its early days. “We already have a very broad base of clergy and lay people who are willing to house occupiers, offer them the use of their showers, provide hot meals. I’m fairly confident that our interfaith clergy group can carry this group through the winter, even if they have no outside place to lodge.”

So far, 1,200 people have signed an Occupy Faith NYC statement of faith, and about 100 interfaith clergy leaders regularly are involved in supporting the movement in New York, he said.

Sniffen’s bishop, Lawrence Provenzano of the Diocese of Long Island, said he would encourage churches to provide shelter to protesters, adding, “that doesn’t mean that every church has to do it.”

“We need to allow this movement to be in our history so this conversation can be had. … I think nationally and internationally we need to have this conversation,” he said. “The church needs to respond to it. I’ve been supportive of my clergy who have gone down there. I have told them we would do anything that we could to somehow be of help.”

Begun Sept. 17 and inspired by the Arab Spring movement, OWS protests against greed and economic inequality have spread to more than 2,400 locations across the country and around the world. In recent days, encampments have been shut down or raided in cities including Oakland, California; Burlington, Vermont; Portland, Oregon; and Nashville, Tennessee.

Elsewhere in the world, authorities are taking similar measures to oust protestors involved in the Occupy movement.

In Canada, police have cleared occupations in Halifax and London, Ontario, and similar tactics are being threatened in Vancouver and Toronto, where protestors are camped outside the Anglican cathedral. Cathedral Dean Douglas A. Stoute recently said that the protestors deserve respect. “We believe that we are blessed to live in a society where peaceful conversation can take place publicly and where citizens are free to voice their concerns without fear of violence or reprisals,” he said.

In New York on Nov. 15, the situation remained fluid throughout the day. Video of the raid and subsequent events was livestreamed here.

Bloomberg said during the press conference that he had been prepared to allow protestors back into the park at 8 a.m. but rescinded that after the city received word of an injunction on its action. Late in the day, a New York court ruled the raid had been legal.

Meanwhile, protestors gathered outside the park and at other locations, including on property owned by Trinity Episcopal Church, Wall Street. According to the Daily News, “They used bolt cutters to open a fenced-in area, and police swooped in and made numerous arrests,” including of several reporters. “At 5 p.m., demonstrators were mostly still massed around Zuccotti, where the overnight raid netted the arrest of 200 people, including Manhattan Councilman Ydanis Rodriguez.”

A pastoral letter from the parish’s rector was pending the evening of Nov. 15.

On Oct. 5, Trinity Church posted a statement on its website inviting OWS protestors to use the congregation’s facilities and staff for rest, revitalization and pastoral care.

The Nov. 15 statement said: “Trinity respects the rights of citizens to protest peacefully and supports the vigorous engagement of the concerns of the protesters. Trinity continues to provide gathering and meeting spaces for Occupy Wall Street in its neighborhood center and facilities in and around Wall Street.”

Given previous statements of support, occupiers had been considering the vacant Trinity-owned property near Canal Street “as perhaps a safe haven,” Sniffen said. “I think the hope was that they would be offered sanctuary.”

Sniffen said he had begun receiving text messages in the middle of the night “saying the park is under threat, come immediately,” but he and other clergy soon realized they could not reach Zuccotti Park. “They closed off the Brooklyn Bridge and they closed down the surrounding subway stations and police were blocking off” streets surrounding the park, he said.

The interfaith coalition coordinated efforts to bring food and water to other locations where protesters were gathering, including Foley Square and the intersection of Sixth Avenue and Canal Street, he said. “I was very concerned when I woke up with the text message about what was going on. We all now have friends living there. It’s no longer an anonymous protest. The clergy involved have pastoral links with people in the park.”

“Reports so far seem to be that no one was injured, at least very badly,” he said, citing an incident in which an Iraq war veteran was in critical condition after his skull was fractured during Occupy Oakland protests. “There don’t seem to be any reports like that so far.”

But injuries did occur, said the Rev. John Merz, priest-in-charge at the Episcopal Church of the Ascension in Greenpoint, Brooklyn, who has been heavily involved with the interfaith coalition supporting OWS. When he first received word of the raid at around 5 a.m., one text described a seminarian he knows running from police and being hit in the head with a club, he said. At one point during the day, he was near the fenced Trinity space that police evacuated. “I saw people getting slammed around,” he said. He saw one man “being literally stomped on by seven police officers,” he said. “I pray to God he’s all right.”

Earlier in the morning, Merz was part of a delegation that met with some pastoral and communications staff at Trinity Wall Street about possible space use for OWS protestors, although they didn’t specifically discuss the “Lent Space,” he said.

Statements of support for the movement have come from various levels of the Episcopal Church. On Oct. 23, the church’s Executive Council issued a resolution affirming “that the growing movement of peaceful protests in public spaces in the United States and throughout the world in resistance to the exploitation of people for profit or power bears faithful witness in the tradition of Jesus to the sinful inequities in society” and calling upon “Episcopalians to witness in the tradition of Jesus to inequities in society.”

At its diocesan convention last weekend, the Diocese of Long Island passed a resolution supporting Executive Council’s resolution as well as the movement and “all those who speak out for economic and social justice in our midst,” recognizing “the necessity for economic and social justice, accountability and fairness in the financial systems of our world and the promise of spiritual and democratic renewal for all” and calling on “elected officials and those in the financial industry to conduct themselves in a manner that upholds the dignity of every human being.”

In a statement released Nov. 15, Diocese of New York Bishop Mark Sisk wrote: “Whatever happens next in Downtown Manhattan, it is terribly important that the core energy behind this protest not be lost behind a blizzard of slogans and rhetoric. The particular motivations of those protesting are, undoubtedly, as mixed as the American people itself. One dominant thread, however, is an (admittedly inchoate) critique of unfettered capitalism.

“As the OWS protestors point out,” he said, “wealth in our country is increasingly concentrated in the hands of a few, the real income of the broad middle class has not increased in more than a generation, and the ranks of the poorest among us each year become ever more solidified. These are the facts — and the reality behind them is, quite simply, morally wrong. Ultimately, left unchecked, that reality is deeply dangerous. It is at odds with our vision of ourselves, and as Americans we ignore it at the peril of our most cherished national ideals. As Christians, we ignore it at the peril of our souls.”

Early that afternoon, Provenzano said he had been in touch by phone with Merz and Sniffen and was concerned for their safety.

“The thing that really is kind of behind the scenes for me that needs to come to the forefront is that those people in Zuccotti Park and everybody who’s doing the Occupy Wall Street protests are really us,” he said. “There aren’t many of us who can say we’re part of the 1 percent. … What [the protestors] are representing for us is the reality of our need for a conversation nationwide, maybe worldwide, of how the average … working-class person is really being victimized by the economic system of our country.”