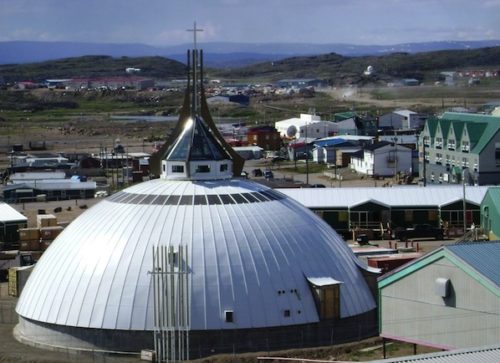 Work on the new cathedral has not yet been completed, but its half-dome shell — similar to the iconic Inuit snow house — and steeple have been installed. Photo/Susan Gardener

[Anglican Journal] St. Jude’s Anglican Cathedral — the “igloo” church that was destroyed by a fire in 2005 — is on its way to becoming, once again, a distinctive feature on the landscape of Nunavut’s capital, Iqaluit.

Work on the new cathedral has not yet been completed, but its half-dome shell — similar to the iconic Inuit snow house — and steeple have recently been installed and interior work has begun, according to an update from the Anglican Diocese of the Arctic.

About CAN$4 million (US$3.91 million) is needed to complete the rebuilding project, said Debra Gill, executive officer of the diocese. The diocese was hoping to reopen St. Jude’s for Christmas services this year, but lack of funds has pushed the target opening to May 2012. About CAN$5.3 million (US$5.18 million) has been spent on the project so far.

The new St. Jude’s will increase its seating capacity to 650 from 150 and will provide more space for the cathedral parish to expand its social outreach programs. Programs include a soup kitchen, bookstore, Sunday school, hospital and prison chaplaincy, food bank, and youth ministry. Diocese of the Arctic Bishop Andrew Atagotaaluk has underscored the importance of these programs for the community, which continues to experience high rates of suicide, school dropout, drug and alcohol addiction, homelessness, and unemployment.

An Arctic landmark and popular tourist destination, St. Jude’s was decorated by Inuit artisans, who donated unique items such as a cross made of narwhal tusks, a baptismal font made of soapstone in the shape of a qulliq (an Inuit oil lamp), a pulpit shaped like an upturned qamutiq (Inuit snows led) and tapestries. The arson fire destroyed many of these valuable items — most of them reminders of a bygone era when missionaries traveled by sled dog teams.

Queen Elizabeth II participated in the sod-turning ceremony for the cathedral in 1970.

Designed by Canadian architect Ronald Thom, it was built by local volunteers and held its first service in 1972.

Further information about the cathedral and its appeal is available here.

— Marites N. Sison is staff writer of the Anglican Journal.