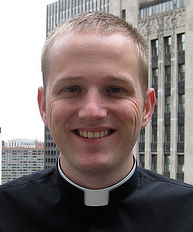 [Episcopal News Service] Since Occupy Wall Street began, Episcopalians have wondered what the church’s role should be in the movement. Where would Jesus be? Some, such as the “Protest Chaplains” in New York and Boston, have embraced the chance to get involved. Others have watched the protests unfold with curiosity, while attending to church business as usual: trying to grow the church by getting people to come inside the doors.

There is an ironic sign floating around the Internet that blesses this time-tested way of being church: “Occupy the Pews of Your Episcopal Church,” it proclaims. I can’t deny, this is clever marketing. But it isn’t Christian. Not only does it contradict the message of the Occupy movement, but the Gospels as well.

When did the Son of Man, who sent his disciples out in pairs with nothing but the clothes on their backs, tell his followers to “occupy the courts of the Temple?” The church is distracted these days by dwindling numbers, aging buildings, and strategies to get people to come inside to encounter Jesus rather than recognizing that Jesus is already present with the people on the streets. What if, instead, the church came out of the buildings and occupied the streets?

On a recent Sunday at 4 p.m. a group of laypeople and clergy from the Diocese of Rhode Island took church out the doors to hold “The Church at Occupy Providence.” With less than 24 hours notice, we gathered with the people occupying Burnside Park, preached the Gospel, shared in Christ’s body and blood, and experienced Christ’s presence in one another. It was a powerful witness, and there were different reactions to us.

Most expressed gratitude for church outside the walls. Some were surprised to see us there. “Is that a costume?” one woman asked me, pointing to my clerical collar. “I didn’t know churches supported things like this,” another person said. Others expressed righteous anger. “Where’ve you been?” one organizer asked me. “You’re the first group of Christians to set foot in this place. Meanwhile, we’ve been feeding hungry people and demanding justice for everyone. Aren’t these the things churches are supposed to care about?”

In the Gospel proclaimed during the service, Jesus spoke about the commandments to love God, and to love our neighbor as ourselves. Jesus especially calls us to love our most vulnerable neighbors, the ones those of us with privilege easily overlook: those who suffer at the hands of the powerful, our sisters and brothers who have lost their homes to foreclosure, those who live and die without access to adequate health care, those who are “undocumented.”

I believe that the church desperately needs the Occupy movement at this tender moment in its life, and that the Holy Spirit may be working through it to call the church to something new. Like the prophets, the Occupy movement may draw the church out of its complacency, and remind us that the church too is a movement, not only an institution. We are a body, not only a building with pews. If we listen to voices of Occupy, we may indeed hear Jesus speaking to us, reminding us of the work he calls us to prioritize, and to love him in the people he called us to serve first.

— The Rev. Edmund Harris is assistant to the rector at Church of the Epiphany in Rumford, Rhode Island.