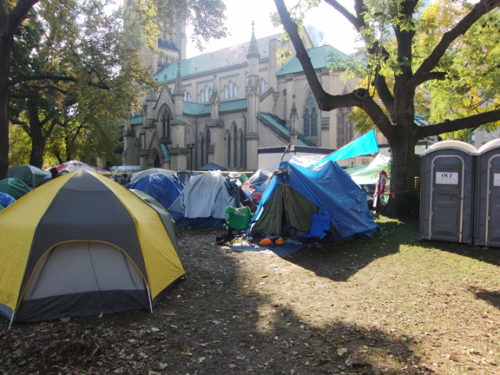 [Anglican Journal] Last Sunday, as the great organ boomed in the Cathedral Church of St. James, Toronto, the park next door reverberated with live down-east fiddling. In mid-October, the Occupy Toronto movement met at the city-owned park of St. James.

The exquisite little oasis in downtown Toronto, with its manicured lawns, well-tended gardens and quaint gazebo, soon became home to about 100 tents, their squat contours contrasting starkly with the soaring grandeur of the neo-Gothic cathedral. Some of the local business owners and residents expressed anger at the cathedral since the park has always been associated with St. James. But, in fact, the power to dislodge the well-behaved seekers of justice and equality — if dislodged they should be — lies with the municipality.

“We have no power to evict the protesters,” said the Very Rev. Douglas A. Stoute, dean of Toronto and rector of St. James, in an open letter on the cathedral’s website. “We cannot speak for the city, but even if we did have that power, we would be very reluctant to invoke it. We believe that we are blessed to live in a society where peaceful conversation can take place publicly and where citizens are free to voice their concerns without fear of violence or reprisals.”

While some locals have complained that the shantytown is bad for business, it seems to be the opposite for the cathedral. “I actually came down from Scarborough to the service at the cathedral today because I wanted to visit the protest grounds,” said visitor Ted McLeod at the end of the well-attended Oct. 30 service, which featured a homily by Archbishop of Cape Town Thabo Makgoba.

Added the Rev. Lisa Wang, associate priest, “It doesn’t seem to have affected cathedral activities at all.” In London, St. Paul’s Cathedral closed it doors for a week in response to what it called health and safety hazards posed by a tent city set up nearby.

Stoute acknowledged that the protest is part of a worldwide response to increasing economic disparity. “The cathedral did not invite the protesters into the park. The cathedral is not involved in the protest,” he said. “We have, however, treated the protesters in the way that our faith and sense of humanity directs: with respect and dignity. For over 200 years, St. James Cathedral has been a place where divergent opinions have come to be expressed in a safe and respectful environment.”

— Diana Swift is staff writer for the Anglican Journal.