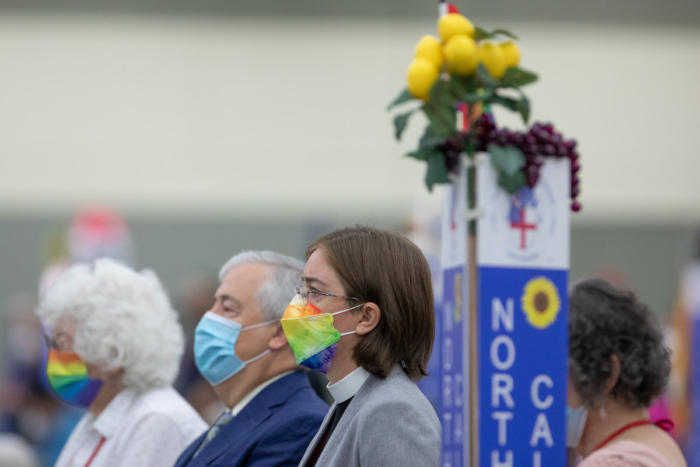 [Episcopal News Service] The 80th General Convention passed 14 resolutions, with little or no debate, speaking to the full inclusion and protection of LGBTQ+ persons in the life of The Episcopal Church and the larger society. Those actions represent a remarkable change from previous conventions, including the same-sex marriage access compromise in 2018, when such measures occupied large swaths of the gatherings’ time and emotional energy.

“Our church is on record—both officially and in practice—with our commitment to the full inclusion of all who seek to follow Jesus and his way of love,” Presiding Bishop Michael Curry said on July 22.  “As we head to the Lambeth Conference, the same dedication leading us to the full welcome, embrace, and inclusion of LGBTQ+ children of God likewise commits us to communion with one another across our differences. We will be true to who we are while upholding our relationships and engaging in real and open conversation.”

The Episcopal Church was set on the path of full inclusion 46 years ago when the 65th General Convention passed resolutions saying “homosexual persons are children of God who have a full and equal claim with all other persons upon the love, acceptance, and pastoral concern and care of the Church” and that they “are entitled to equal protection of the laws with all other citizens.”

Earlier this month, the majority of LGBTQ+ related resolutions passed mostly via the 80th General Convention’s massive consent calendars, in what the Rev. Susan Russell described as “extraordinary.”

“And that was a sign of the health of the church that we are at a place where we want to focus on what we can do together, not argue about what we disagree about,” Russell, a Diocese of Los Angeles deputy and longtime advocate for LGBTQ+ Episcopalians, told Episcopal News Service.

She attended the last 11 General Conventions including two as a deputy, and said the July 8-11 gathering in Baltimore, Maryland, was “a watermark convention” for “those of us who continue to advocate for the church to continue in its movement to make the full and equal claim for LGBTQ people that was promised in 1976 not just a resolution but a reality.”

Resolutions passed by the 80th General Convention include:

Convention also passed three resolutions about evangelism (C060), revitalization of congregational ministries (A096) and planting new faith communities (A095) that all specifically include “people who are gay, lesbian, bisexual or transgender (LGBTQI+), gender non-conforming people.” And deputies passed a courtesy resolution (D059) giving thanks for “the extraordinary ministry of Louie Crew Clay,” an LGBTQ+ activist who died in 2020.

“We understand this as a living out of our commitment to holy baptism, which is profoundly articulated by St. Paul in Galatians 3:27-28: ‘As many of you as were baptized into Christ have clothed yourselves with Christ. There is no longer Jew or Greek; there is no longer slave or free; there is no longer male and female, for all of you are one in Christ Jesus,’” the presiding bishop said. “For me, personally, this is a living out of what the old slaves used to sing: ‘There’s plenty good room for all God’s children.’”

The Episcopal Church’s advocacy for LGBTQ+ people pre-dates the 1969 Stonewall Uprising, although its early efforts were slow and halting, and echoed the era’s perceptions about human sexuality. That work, at times, has prompted some conservative Episcopalians to leave the church in protest, in some cases setting up decades-long legal disputes. More recently, following the 2003 historic election of the Rt. Rev. Gene Robinson, the now-retired bishop of New Hampshire, four dioceses have elected openly gay partnered priests to be their bishops.

Until earlier this week, tensions over LGBTQ+ bishops’ attendance at the upcoming Lambeth Conference of Anglican bishops had focused on Archbishop of Canterbury Justin Welby’s decision to invite those bishops – a new precedent – but not their spouses.

The Episcopal Church’s bishops and deputies passed a resolution in Baltimore expressing to Welby the General Convention’s dismay at his decision to exclude same-sex spouses of LGBTQ+ bishops (D092) from the gathering.

The Conference, set for July 26-Aug. 8, is a typically once-a-decade gathering of Anglican bishops from across the 85 million-member worldwide Anglican Communion. It brings together bishops and spouses for prayer, Bible study, worship and fellowship, in addition to joint consultation by the bishops on internal Anglican matters, relations with other churches and religions, and theological, social and international questions. The gatherings help shape the life of the Anglican Communion for the next decade.

In advance of the 2022 Lambeth Conference, Welby said he hoped to unite the Anglican Communion under common expressions of faith and social engagement, rather than focusing on debates over human sexuality that have divided bishops at past conferences.

He plans for the bishops to vote on “Lambeth Calls” meant to replace the previous gatherings’ resolutions to acknowledge that the conference does not have any legislative or policy-setting power over the 42 autonomous churches and five extra-provincial churches that make up the Anglican Communion.

“The move from resolutions to calls is simply a recognition of the reality that the Lambeth Conference is not a synod. It can’t resolve things in the sense that they’re then resolved. They can call on provinces to consider for themselves, and that’s why we call them a call, because they’re a call; they are not a resolution,” Welby said in a June 22 press conference.

On July 18, the Lambeth Conference released to the public and emailed to bishops a 58-page study guide including draft versions of 10 Lambeth Calls covering such topics of Anglican identity, science and faith, discipleship, reconciliation and human dignity.

The study guide asks bishops to consider whether they can envision the calls “put into practice” or not in their provinces or dioceses. Calls will be discussed as a group beginning on the conference’s fourth day, and bishops will be asked to vote “to adopt” or “adapt” a call. By adopting a bishop acknowledges the call speaks to them, adds their voice and commits to taking the action to implement it; and by adapt, a bishop acknowledges the call requires further discernment and commits their voice to the ongoing process.

The Human Dignity Call, scheduled for the seventh day, Aug. 2,  includes, on pages 31 and 32, provisions that call on the bishops to reaffirm the 1998 Lambeth gathering’s stance against same-sex marriage (in Resolution 1.10) by stating that “it is the mind of the Anglican Communion as a whole that same-gender marriage is not permissible.”

Archbishop Justin Badi, primate of the Episcopal Church of South Sudan and leader of the Global South Fellowship of Anglican Churches, recently said that the group’s members would seek to have the conference reaffirm Resolution 1.10 as the “‘official teaching’ of the Anglican Church on marriage and sexuality.” This, they said, would “directly challenge” bishops from The Episcopal Church of America, Canada, New Zealand, Scotland and Wales who favor marriage equality.

Some Episcopalians have reacted strongly against the effort to reaffirm the call’s opposition to same-sex marriage.

Los Angeles Bishop John Taylor wrote in a widely shared July 20 Facebook post that “moderate and progressive Anglicans and Episcopalians” had been led to believe that such dividing issues were going to be avoided through the Calls process. Instead, he wrote, they will arrive in Canterbury “as credulous props for what is likely to be a majority vote against marriage equity.”

If the Lambeth Call on Human Dignity passes in its current form, Taylor said, “The Episcopal Church will again have to work hard to remind people that we don’t read the Bible literally, divorced from its historic rootedness — that slowly but surely, across generations, we have moved away from arguing that the word of God countenances slavery, misogyny, homophobia, and transphobia.”

The call would also reaffirm Resolution 1.10’s admonition that “all baptized, believing and faithful persons, regardless of sexual orientation are full members of the Body of Christ” and should be “welcomed, cared for, and treated with respect.”

Convocation of Episcopal Churches in Europe Bishop Mark Edington on July 22 criticized what he called a tragic juxtaposition of the reaffirmation of Resolution 1.10 in the same Lambeth Call that would have bishops acknowledge “the existence and ongoing impact of an imperialist Anglicanism involved in dehumanizing practices predicated upon cultural and racial supremacy,” as the call text puts it.

Thus, Edington said, what he called “a lot of good stuff” in the calls could get lost in the possible debate about whether Resolution 1.10 truly does express the mind of the entire communion.

“The whole reason that you asked some of the spouses to stay home was that at least in their part of the Anglican Communion they are regarded unapologetically as legit children of God,” Edington wrote.

“But the play here is pretty obvious, right?” he continued. “Who wants to be seen voting against a great statement acknowledging our colonial past and condemning our unequal present?”

The status of same-sex marriage has, at times, roiled The Episcopal Church as well as the Anglican Communion. The 78th General Convention in 2015 changed the church’s canons to eliminate language defining marriage as between a man and a woman (via Resolution A036). That convention also authorized trial use of two new marriage rites with language allowing them to be used by same-sex or opposite-sex couples (via Resolution A054).

After eight diocesan bishops would not permit the use of the rites in their dioceses and required couples wanting to use them to be married outside their diocese and away from their home church, the next meeting of convention in 2018 passed Resolution B012 to ensure all Episcopalians unfettered access to those rites in jurisdictions where same-sex marriage is legal.

Taylor added that he felt bad for the more-conservative Episcopal bishops who, at the General Convention in 2018, agreed to what he called “an historic compromise on marriage equity,” which Russell, the Los Angeles deputy, helped lead. “Without denying their belief in traditional marriage, these bishops generously acknowledged a pastoral responsibility to make sure that all people in their dioceses, irrespective of orientation, had access to the marriage rite in the parishes they love,” Taylor wrote. “As a result, we have achieved considerable unity in spite of substantial diversity of opinion. Now these bishops are being dragged back into the same old wearying binary argument.”

As the calls have already provoked conversation even before many of them have left their diocese for England, Welby on July 22 sent a message to bishops attending the Lambeth Conference.

“I know that many of you are reading and praying about the draft Lambeth Calls that have been published this week – and they are naturally the subject of debate ahead of the conference. Indeed, these Calls have grown out of a process of discussion and encounter with one another. They are informed by the insights and themes of the online video conversations between bishops across the world over the past year. They have been drafted by a diverse group of Anglicans – male and female, lay and ordained, from different generations and from every part of the Communion,” the archbishop wrote.

“They are one part of a process that began before this part of the Conference, and will continue long after it formally finishes, as every Province discerns its own response to the Calls in their own contexts.”

Meanwhile, the LGBTQ+ staff of the University of Kent, where the bulk of the conference will take place, is planning two parallel events on July 27 “to stand up for quality & inclusion.”