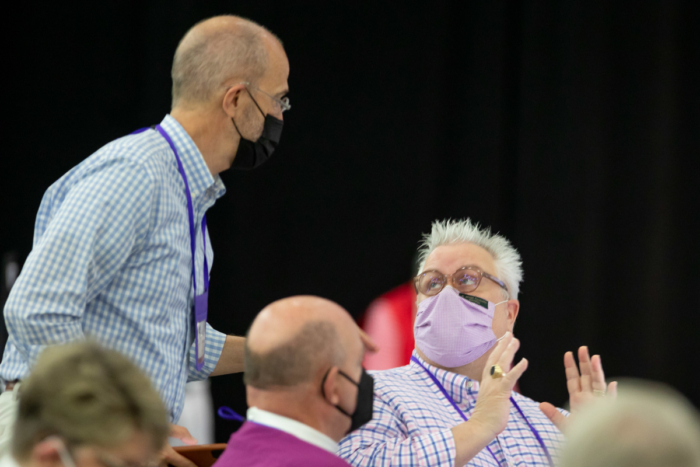 Editor’s note: This story was updated on July 11 to include the final passage of the resolution.

[Episcopal News Service – Baltimore, Maryland] General Convention has approved a plan to expand and clarify what exactly the Book of Common Prayer is, with the House of Bishops unanimously passing Resolution A059 on July 9 and the House of Deputies concurring the following evening. It was sent back to the bishops with a minor amendment for a final vote, which passed on July 11.

A059 would, for the first time, define the Book of Common Prayer as “those liturgical forms and other texts authorized by the General Convention.” In other words, liturgies that are not in the current prayer book – such as same-sex marriage rites and gender-expansive liturgies – could be elevated to “prayer book status,” whether they are replacing parts of the prayer book or standing on their own.

“What A059 is about, really, is acknowledging that common prayer is evolving,” said the Rt. Rev. Jeffrey Lee, bishop provisional of Milwaukee, chair of the House of Bishops’ Committee on Prayer Book, Liturgy & Music and one of the architects of A059. “And it creates a framework for that evolution to happen, including the inclusion of a number of different rites in a curated collection.”

The resolution – which had garnered increasing attention in the weeks leading up to General Convention – would amend Article X of the Constitution of The Episcopal Church, which lays out how the Book of Common Prayer can be revised but has never specifically provided for authorized liturgies that are not proposed revisions to the existing book. Since it is a constitutional change, it will have to be approved in a second reading at the 81st General Convention before it can take effect.

The discussions in the House of Bishops on July 8 and 9 – as well as in legislative committee meetings leading up to convention – mostly focused on parsing out the mechanics of what A059 would and would not do. In its current form, A059 would not change the status of the 1979 prayer book or of the various liturgies authorized by General Convention that are not in it. It would, however, set the canonical framework for future evaluation and reorganization of those liturgies.

The debate, though, went beyond that to touch on more philosophical questions like the meaning of the word “book” in the 21st century, and the concept of “common prayer” itself. Discussion on July 8 veered into the theological and political origins of the Book of Common Prayer, from Thomas Cranmer and Queen Elizabeth I through the formation of The Episcopal Church after the American Revolution.

“The cat is already out of the bag,” Lee said. “The idea of the prayer book [evolving from] a book bound and physically present in a pew to a curated collection of texts that lives online – that’s already the case, perhaps with different understandings of authorization. But we decided to do that when we first decided that you could cut and paste a PDF.”

Primary factors in the development of A059 included a desire for official liturgies with an expansive understanding of gender and sexuality, preparation for future prayer book revision and concern about the proliferation of other liturgies in various states of authorization. Over a dozen liturgical texts have been “authorized” – for trial use, experimental use, or simply “made available” – by General Convention over the years. However, Article X currently only addresses convention’s ability to revise all or some of the existing Book of Common Prayer. It says nothing about authorization of other liturgies not directly related to the existing prayer book, a category that encompasses many of these other texts, like “Enriching Our Worship.”

“A larger issue that we’re trying to deal with … is we have all kinds of authorizations and all kinds of trial usages, and it’s kind of a mess,” Lee said.

All authorized Episcopal liturgies have been compiled together at episcopalcommonprayer.org, which was created by the Task Force on Liturgical and Prayer Book Revision. Resolution A058, which was passed by both houses, designates the site as “the official liturgical website of The Episcopal Church.”

The original version of A059, Lee said, was “an attempt to clarify what authorization has the weight of the Book of Common Prayer and what other rites might not have that. … What’s being proposed in A059 is not the creation of a wiki-prayer book.”

The effort originated at the 2018 General Convention, where A068 created the liturgical revision task force, with the intention that it would not necessarily lead to an entirely new edition of the prayer book but propose revised liturgies with inclusive and expansive language. Existing liturgies, some deputies and bishops had argued, use gendered language that is exclusive and unnecessary.

At this convention, A059 – which was proposed by the Task Force on Liturgical & Prayer Book Revision – was introduced by Lee’s prayer book committee in a version that proposed a process by which new liturgies could achieve prayer book status. That version was ultimately replaced with a substitute developed by a group of bishops including Lee, Texas Bishop Andrew Doyle and Ohio Bishop Mark Hollingsworth.

The substitute left the specific process of authorizing new texts open to future canonical definition, focusing just on the constitutional change that would enable such work. It leaves in place the requirement that any prayer book changes must be approved by two successive General Conventions, and specifies that any changes must be authorized for trial use first.

In response to concerns that the resolution might be interpreted as demoting or restricting the 1979 prayer book, the substitute includes additional clarifying language.

“The Book of Common Prayer, as now established or hereafter amended by the General Convention, shall be in use in all the Dioceses of this Church.”

Since A059 is a constitutional and not a canonical change, it would not alter the status of any existing authorized liturgies. The final version creates a working group to propose canonical changes that would clarify or alter the status of the rites that have been authorized for trial or experimental use over the last few decades. That working group will present those recommendations to the 81st General Convention, where A059 will come up for a second reading.

Lee, Doyle and Hollingsworth had encouraged the house not to delay acting on A059 or referring it back to another body because of the timing requirements for constitutional and canonical changes, which Bishop Sean Rowe, the House of Bishops’ parliamentarian, explained.

As discussion moved into the evening on July 9, consensus around the amended resolution emerged and bishops rose to thank the team of 12 bishops who crafted it. 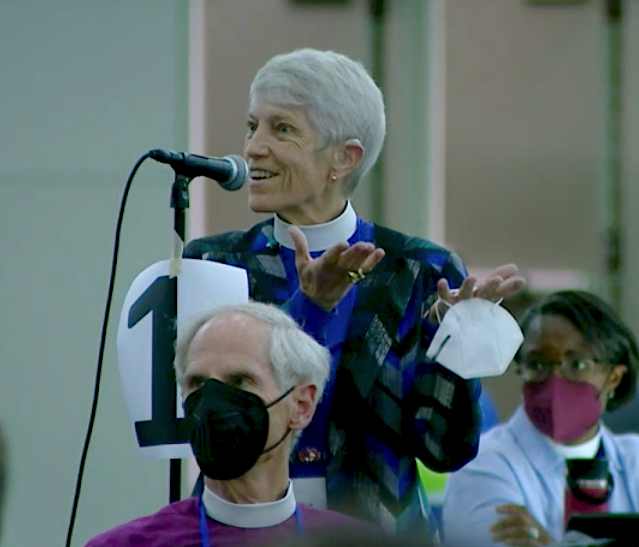 “I think this resolution is brilliant,” said New York Assistant Bishop Mary Glasspool. “I’m amazed – we’re in this four-day General Convention and somehow squeezing into that intensity has driven us deep. This is the best conversation that I’ve been a part of in the 11 years that I’ve been bishop and coming to these meetings.”

The resolution passed on a voice vote that was unanimous, Presiding Bishop Michael Curry confirmed for the record.

On the evening of July 10, the House of Deputies considered a lightly amended version of A059, which specified that the working group would have nine members and a budget of $30,000, in addition to making a procedural wording fix. After 20 minutes of discussion — with testimony split between supporting and opposing — the amended A059 was concurred, sending it back to the House of Bishops, which passed the final version on July 11.