[Episcopal News Service] The House Judiciary Subcommittee on the Constitution, Civil Rights, and Civil Liberties held a hearing June 19 on H.R. 40, a bill introduced by Rep. Sheila Jackson Lee (D-Texas) that calls for the creation of a commission to study and develop reparation proposals for African Americans.

Among those serving on the panel of majority witnesses were Bishop Eugene Taylor Sutton of the Episcopal Diocese of Maryland and Katrina Browne, producer of the documentary “Traces of the Trade: A Story from the Deep North” and consultant for The Episcopal Church as part of its Becoming Beloved Community racial justice and healing initiatives. Also on the panel were actor Danny Glover, author Ta-Nehisi Coates (“Between the World and Me”), Columbia University undergraduate Coleman Hughes and former NFL player and author Burgess Owens. The hearing took place on Juneteenth, which commemorates the announcement of the abolition of slavery in Texas in 1865.

Sutton was the only religious leader invited to testify. Last month, the Diocese of Maryland unanimously passed a resolution on racial reconciliation, affirming a pastoral letter from Sutton to the diocese on what reparations really mean (repairing the breach) and how the diocese might move forward together through programs and initiatives to build a better world out of the wreckage of the past.

Sutton and Browne talked about the importance of reconciliation, truth telling and healing for the souls of all Americans. Sutton noted that he is often asked, “What do black people want?” His question, in return, is: “What do you want? If you are happy with the state of race relations in America, do nothing. If you are not happy, support the establishment of this commission for discussion and study.” Browne’s closing words were featured today as The New York Times’ Quotation of the Day: “It is good for the soul of a person, a people and of a nation to set things right.”

Other testimony focused on what were named as prejudicial government actions that have had deleterious effects on the well-being of the African American community. Practices such as redlining, predatory lending and mass incarceration were mentioned by witnesses as examples of modern oppression of African Americans. All of these issues, according to Coates, have to do with “the institution in the American mind that black people are necessarily inferior,” which was normalized by slavery. 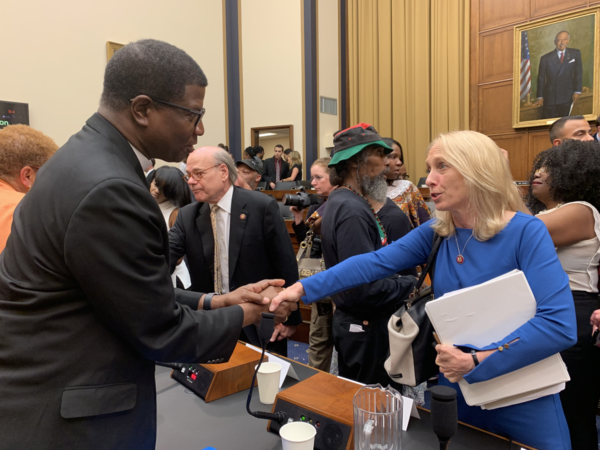 Rep. Madeleine Dean (D-Pennsylvania) and Rep. Mary Gay Scanlon (D-Pennsylvania), who are not co-sponsors of the bill, cited their work on predatory lending and environmental injustice, both issues that they say embody current-day societal discrimination against African Americans. Dean quoted admissions from Wells Fargo bank of pushing subprime lending in black communities.

Other discussion centered on knowing the nation’s past and its importance in guiding future action. Coates wondered why, if people really understood history, would there be statues and flags honoring the Confederacy, whose aim was to destroy the country. Danny Glover quoted James Baldwin, saying, “If we can’t tell ourselves the truth about the past, we become trapped in it.”

“The Office of Government Relations represents the policy priorities of The Episcopal Church to the U.S. government in Washington. We do this through our action alerts, meeting with members of Congress, and engaging with Congressional staff. But it is a great opportunity for the Office of Government Relations and for our church when church leadership is asked to testify before Congress and to represent our positions in that forum,” said Director Rebecca Linder Blachly.

“In 2006, General Convention called for the establishment of a commission to further explore reparations, and we are gratified to be able to highlight this position and broader efforts in this area on the national stage, and to present the ways we are striving to work together towards restorative justice,” she said.

The Episcopal Church has a more recent history of working to acknowledge the past and to discern how it can move forward to repair the breach and heal a broken and divided society. Subcommittee Chair Rep. Steve Cohen (D-Tennessee), in introducing Browne, thanked The Episcopal Church for being ahead of Congress in passing an apology in 2006. (Cohen introduced an apology bill in the House of Representatives in 2007, which passed in 2008.)

General Convention has passed resolutions to Support Legislation for Reparations for Slavery (2006-C011), Endorse Restorative Justice and Anti-Racism (2006-A127), Study Economic Benefits Derived from Slavery (2006-A123), Reaffirm a Resolution on Truth, Reconciliation and Restorative Justice (2009-A144), and Recommit the Church to Anti-Racism and Request Annual Diocesan Reports (2009-A142).

H.R. 40 asks that the United States government do the same. “H.R. 40 calls for the establishment of a commission,” said by Rep. Karen Bass (D-California). “It does not call for checks. To call for money trivializes reparations. Conversation is necessary, and it begins with a commission.”

Economics, however, were not left out of the discussion. Economist Julianne Malveaux closed her testimony by asking that any future legislation with economic implications be audited for racial justice.

Full coverage of yesterday’s testimony can be found here.

– Carrie Graves is the director of communications for the Episcopal Diocese of Maryland.