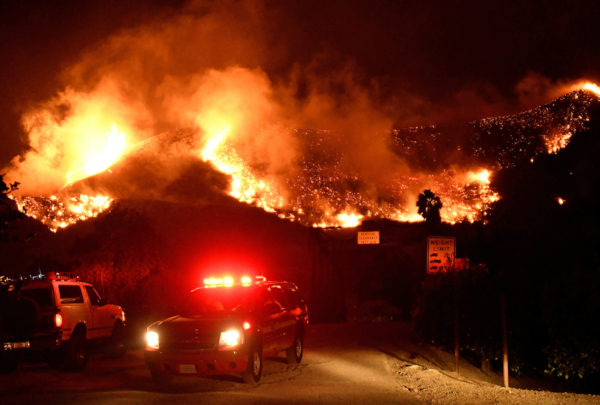 [Episcopal News Service] For some, the warning came via an alert on their cellphones. For others, it was a neighbor knocking on their doors with a shouted message to leave.

Episcopalians joined their neighbors Dec. 4 in fleeing the swift advance of the Thomas Fire that has burned from the mountains near Ojai, California, into the city of Ventura on the Pacific Ocean.

“It was like watching the sun rise over the mountains last night,” said the Rev. Greg Kimura, rector of St. Andrew’s Episcopal Church in Ojai. “The whole horizon above the mountains was glowing but it wasn’t the sun; it was the fire.”

Kimura, whose phone lit up with an emergency signal about the fire the night of Dec. 4, spoke by phone with Episcopal News Service on Dec. 5, just after he arrived at a hotel north of Santa Barbara with his family.

The fire began close to Ojai near California State Highway 150 the previous evening and spread into nearby Santa Paula before racing south into Ventura.

A vestry member called the Rev. Cynthia Jew, priest and pastor of the blended congregations of St. Paul’s Episcopal Church and Emmanuel Lutheran Church in Santa Paula, to tell her about the fire. Jew lives in Thousand Oaks. She told ENS that some members of the congregation evacuated to Ventura overnight, only to be forced to leave there because of the advancing fire.

The fire quickly blew into Ventura. “An angel who came out of nowhere” banged on the door of the Ventura home where the Rev. Anthony Guillen, the Episcopal Church’s missioner for Latino/Hispanic ministries, lives with his wife, Guadalupe Moriel-Guillen, and their dog and cat. He pointed toward the pinkish-orange glow over the ridge above his home. In the short hour they took to pack some clothes and gather important papers and some computer hardware, that glow turned red and seemed to be advancing toward their driveway, Guillen told ENS.

As they drove both of their cars away, Guillen said friends called him from Oxnard, offering him and his wife a place to stay. Guillen spent the drive calling other friends to make sure they were evacuating as well.

Around 9 a.m. Dec. 5, Guillen had no word on the fate of his home of the last seven years. A friend sent an aerial news clip of their neighborhood. “Our house is not on fire in that shot, but that was a few hours ago,” he said.

Having lived in Ventura since 1999, Guillen said his family is very aware this time of the year about the dangers of fire season, living as they do up in the hills, but this kind of fast-moving fire was “totally new” to him.

The Rev. Melissa McCarthy, Diocese of Los Angeles canon to the ordinary, agreed that Southern Californians are used to wildfires. “This is a little bit out of the box in that it is actually burning in downtown Ventura on Main Street,” she said. “It’s an entirely different situation than our normal wildfire season” when most fires burn in wild lands and might endanger small clusters of far-flung homes or distant suburbs.

“I don’t ever expect the fires to be raging through Ventura, the city of, and that’s what’s happening right now.”

The Rev. Susan Bek, rector of St. Paul’s Episcopal Church in downtown Ventura, reported on Facebook that the church was still safe and open for those needing shelter.

Those flames over the entire ridgeline above Ventura prompted the Rev. Nicole Janelle and her family to get out of town as well. “Given that we have two small children, we thought it would be more prudent to leave on the early end [of the evacuation] than on the later end,” she told ENS. “I am glad we did because shortly after we left traffic really picked up, and it took some folks several hours to leave the area.”

Janelle and her family went to stay with the Rev. Julie Morris in Camarillo, near Ventura. Morris is a founding member of The Abundant Table, a sustainable working farm for which Janelle is currently the executive director. The farm is not in the direction of the wind-blown flames, although Janelle said those winds can damage crops. The farm grows food for its community-supported agriculture program and its farm store, as well as for several public school districts.

The farm has a weekly Sunday evening worship service and meal, and Janelle said she was spending time Dec. 5 checking in with worshippers and staff, many of whom were forced to evacuate. So far, none of their homes have burned, she said.

The Los Angeles Times reported that the Thomas blaze followed Foothill Road from Santa Paula to Ventura, taking out homes and winding along canyons in the process.

The Thomas Fire – along with two fires that started on Dec. 5, the Creek Fire, which has burned more than 4,000 acres near Sylmar and Lake View Terrace about 60 miles east of Ventura, and another nearby in Santa Clarita – is causing highway and school closures as well as evacuations. These fires have exploded two months after the mid-October fires in Northern California. Those fires killed 43 people and destroyed more than 10,000 structures. This has been the worst year on record for wildfires in California.

After Kimura and his family got the emergency alert about the fire in Ojai, the priest went to St. Andrew’s, which was hosting about 30 overnight guests of the Ojai Valley Family Shelter. The church is the Monday night location for the shelter. Kimura helped get those people to an American Red Cross shelter set up at the local high school. Then he began calling elderly and shut-in parishioners, as well as others he thought might need help evacuating.

Downtown Ojai, where the church is located, was not then under a mandatory evacuation order, but officials “highly suggested” residents leave. “So, I basically went around and knocked on some doors and woke a bunch of people up – and scared the bejesus out of them and drove them to the high school,” he said.

He and Jew in neighboring Santa Paula are worried about the fire’s impact on their communities both now and long after the flames die out.

“I’m concerned for the evacuation and I am concerned that afterwards there’s going to be a tremendous amount of need for rebuilding,” he said.

St. Andrew’s is involved in sanctuary work, and it is part of a rapid-response team to help people who run afoul with immigration agents. “I have to believe that a number of people who are being displaced are people who are feeling vulnerable for a number of reasons,” Kimura said. “I am very concerned about the humanitarian response afterwards when we get a better sense of how many people have been displaced and lost homes.”

“Our main concern right now is the homeless,” Jew said. The fire burned over Steckel Park in Santa Paula, the site of a homeless encampment.

Jew said Episcopalians might be called on to provide tents and sleeping bags to homeless people who might have lost their belongings in the fire. Some homeless in Santa Paula, which has a high percentage of Hispanic residents, left their belongings at the church but walked away. “I am not quite sure where they went,” she said. “I think they are hiding out.”

Meanwhile, if the need is there, she will open the church “to provide emergency shelter for people who are unable or unwilling to go to the shelter because they fear deportation. Right now, that’s not what’s happening, but I am definitely willing to take that action.”

McCarthy confirmed that homeless people and undocumented people are the two “priority populations” in the diocesan response to the fires.

“We’re trying to identify and help and protect both homeless populations, which in Ventura is not a small number and where it’s burning is where they live, and also our undocumented people” who right now are afraid to go to shelters, she said.