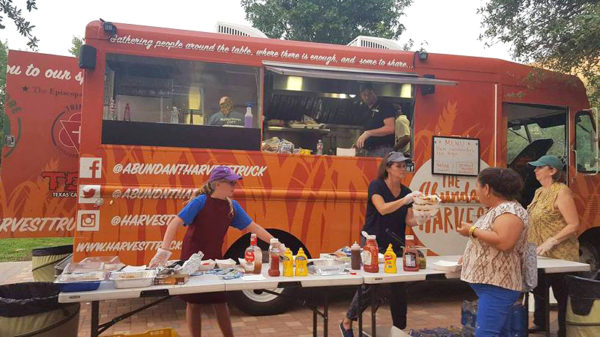 [Episcopal News Service] It is hard to differentiate the feeding ministry from the work of spiritual enrichment underway at St. Isidore’s Episcopal Church. That difficulty is by design.

St. Isidore’s is a church built without walls but with a set of wheels that allows it to bring faith and food to several small communities of worshippers north of Houston, Texas. Some meet at a Taco Bell or a Panera Bread, others at a laundromat. Central to the mission is the Abundant Harvest food truck, which serves as a focal point for developing Christian relationships while alleviating both physical and spiritual hunger.

“I think people need to be nourished body, mind and soul,” said the Rev. Sean Steele, who started St. Isidore’s in 2015 as a church plant through Trinity Episcopal Church in The Woodlands, Texas. It now supports eight distinct faith communities totaling about 80 people, as well as its Abundant Harvest ministries. “Feeding and eating is a huge part of everything we do.”

Episcopal News Service caught up with him by phone to conclude its “Food and Faith” series on the range of efforts within the Episcopal Church to fight hunger. 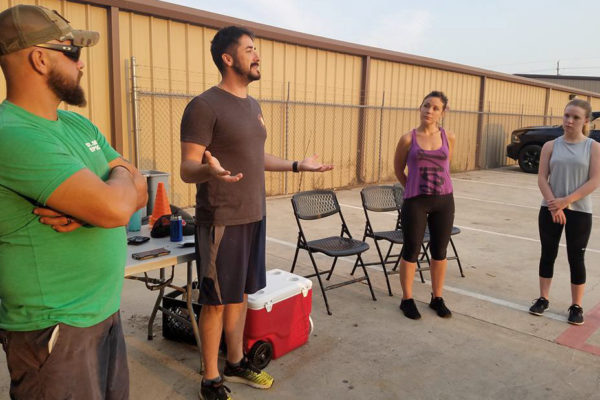 The Rev. Sean Steele leads a September gathering of the Warrior Church, a community of St. Isidore’s Episcopal Church that meets for fellowship, worship and exercise at a fitness club in the Houston area. Photo: Warrior Church, via Facebook

Episcopal News Service’s five-part series focuses on anti-hunger efforts in the Episcopal Church, from food pantries to the church’s advocacy on government programs that fight hunger. All stories in the series are available here.

St. Isidore’s growth over the past few months has been driven largely by the congregation’s relief efforts in the devastating aftermath of Hurricane Harvey. Steele estimates his parishioners and volunteers have served about 10,000 meals to people suddenly in need of food because they lost their homes in the late-August storm and subsequent flooding.

“It has shown us what we are capable of,” Steele said. And although the urgent need for hurricane relief has thankfully decreased, the feeding ministry has maintained its momentum. Donations have increased. Its volunteer list has more than tripled. St. Isidore’s likely will serve 750 meals or more each week through the end of the year.

To say that we have great volunteers is such an understatement. This is just a fraction of the people who came out today to help us sort through over a ton of supplies, prep and cook 150 meals, and then take them out into our community to serve them. We cannot thank you enough, and we cannot do it without you. Keep signing up!

A post shared by The Abundant Harvest Kitchen (@abundntharvestkitchen) on Aug 30, 2017 at 9:04pm PDT

Steele isn’t the only Episcopal priest enlisting a food truck to disseminate meals and a gospel message, nor is he alone in the church planting trend of holding spiritual gatherings outside of traditional church spaces. But his work is receiving national attention partly for his deliberate blend of outreach and Episcopal traditions, preferring not to minimize sacramental connections.

“There’s something to do with how we eat and who we eat with that says something about how we relate to God above,” Steele said, adding that references to food permeate the gospels.

He cited Matthew 25, in which Jesus said those who care for the needy will inherit the kingdom of the God. Jesus’ list of those in need is expansive – strangers, prisoners, the sick, the naked – and it starts with those who hunger and thirst: “I was hungry and you gave me food, I was thirsty and you gave me something to drink.”

The idea behind St. Isidore’s is to go beyond giving food to the hungry. Steele and other staff members and volunteers are deliberate about creating communion at the same time.

“It’s really our idea not to just pop in and get people fed and leave again,” said Molly Carr, the full-time food truck missioner at St. Isidore’s. “Ours is really about community, about building relationship around the table, and that is how we think Jesus built relationships. We’re kind of following that lead.” 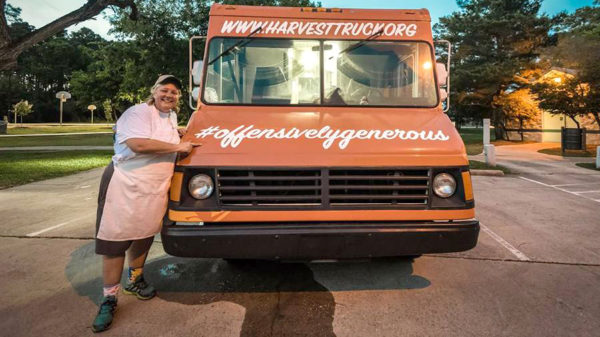 Part of her role resembles that of a food pantry coordinator, as she collects excess groceries donated by stores in the suburban Houston area to repackage for distribution through the food truck. That process becomes an opportunity to bring together another one of St. Isidore’s communities: the volunteers who gather twice a week to help sort the food while also enjoying fellowship, Christian renewal and the meals that they bring back to their families at home.

In this, as in each of St. Isidore’s communities, Steele said the goal is to create a sacred space that maintains sacramental Christianity without depending on a church building.

“I love churches,” Steele said. “I’m just not entirely sure we need to build many more of them.”

Searching for the church economy

Steele, born in Omaha, Nebraska, spent most of his childhood in California, where he described his spiritual upbringing as “culturally Irish Roman Catholic.” His family moved to Houston when he was 16. He didn’t initially hear a call to ordained ministry, going to college instead to study finance and accounting.

That training helped him land a job at Enron, at a time when the Houston-based energy company was one of the largest in the world – but also shortly before it would collapse into bankruptcy in 2001.

Suddenly out of a job, “I had a sort of moment of clarity where I realized that’s not the direction I wanted to take my life,” he said. Instead, he went back to school and got a master’s degree in Roman Catholic systematic theology.

A fellow student in his program was an Episcopalian and introduced Steele to the Episcopal Church. From that experience, Steele embarked in 2006 on a six-year journey to ordination, first as an Episcopal deacon in 2012 and as a priest in 2013 after graduating from the Seminary of the Southwest in Austin, Texas.

Trinity Episcopal in The Woodlands was his first church, where he served his curacy. In conversations with Trinity’s rector, the Rev. Gerald Sevick, Steele already had ideas for starting a church plant, and Steele said Sevick encouraged that thinking, as did Diocese of Texas Bishop Andy Doyle.

As Steele took on the role of associate rector at Trinity, Sevick gave him a few hours each week starting in early 2015 in which he was free to dream big, get creative, conduct research and search for the answer to what it means to be church in the 21st century.

By October 2015, he had a plan for St. Isidore’s as a church plant of Trinity Episcopal, with fundraising underway and an initial goal of purchasing a food truck. Named for the patron saint of peasant laborers, St. Isidore’s started with one community of eight adults and five children, including Steele’s own family, that met in a house.

Since then, it has grown to include groups that meet at restaurants, taverns, a boxing gym and spoken-word poetry events. Its monthly “laundry love” events at a local laundromat pay for hundreds of loads of laundry, but they don’t end there – Mass is held inside the laundromat in English and Spanish, and worshipers also are offered social service assistance, from flu shots to haircuts.

And, of course, food is served. The laundromat is one of the many regular stops on the Abundant Harvest truck’s monthly route, which includes meals at a low-income apartment complex.

“We are a church that believes, at the heart, we are called to feed people,” Steele said. “So, we create environments where communion is built around the table.”

Coffee, prayer and an abundant harvest

The community dinners offered at the apartment complex come with a prayer service. There’s always an extra seat at the table, Carr said, and volunteers are assigned specifically to engage the residents in conversations and make them feel welcome as they are eating their meals.

“These are our neighbors we’re eating with, and they’re eating with their neighbors,” Carr said. “And when you can have a conversation over a meal that’s healthy and tastes good, physiologically, that’s going to make you feel better.”

Steele talks of promoting a church economy that values things differently from American capitalist society. That church economy is on humble display every Monday and Thursday morning in the kitchen of Trinity Episcopal.

At 6:45 a.m., about a half dozen people gather to help unload food deliveries and sort through bruised apples, rotten bananas and cracked eggs to repackage unspoiled items suitable for the families that the Abundant Harvest food truck serves.

These volunteers also are some of the food truck’s clients, ranging from struggling college students to senior citizens to single parents, and they get to take a portion of the food home with them, a process of giving and receiving that sends ripples in all directions.

“It’s really a very mellow and positive environment,” said Dulce Cueva Salas, a 33-year-old native of Costa Rica who is part of the crew of volunteers that helps sort food on Mondays. Carr also hired Cueva Salas part time this fall to help with some of the meal distribution, especially in Spanish-speaking neighborhoods.

We are excited to announce that Dulce Maday Cueva Salas has accepted the position of Chef de Cuisine for Disaster Relief. She will be assisting with our ongoing Harvey Relief efforts as we will continuing serving an additional 750 meals a week through the year. #offensivelygenerous #inthecommunity #harveyrelief #sheisagreatcook

A post shared by The Abundant Harvest Kitchen (@abundntharvestkitchen) on Oct 23, 2017 at 3:13pm PDT

“The whole idea behind the food truck, behind Abundant Harvest, it just drives me,” Cueva Salas said. “It really calls me. I feel like I have a call.”

New volunteers come and go, making friends along the way as they work their morning shifts. Some volunteers have in the past invited others over for dinner, enjoying the food they have received together and further extending the fellowship.

The choice of the word “abundant” in the food truck ministry’s name was deliberate. God’s abundance is everywhere, Carr said, and not just in the food these families share. After bringing in the food, they pause each morning to have coffee and pray together. When the sorting begins, Carr puts on music in the background. Conversations bloom – not necessarily serious or profound, just people catching up on their lives, she said.

The work and cleanup are usually done by 8 a.m. (or by 7:30 a.m. for Carr’s more-experienced Thursday crew), and the volunteers say their goodbyes and go on their way with their bags of food.

“We’re trying to give people an amount of food that actually makes a difference,” Steele said.

The food Cueva Salas takes home after volunteering Mondays mornings – bread, milk, cheese, eggs, meat and plenty of fruits and vegetables – makes a big difference for her family. Her husband is unemployed, and they have a 9-year-old son and 7-year-old daughter to feed.

“It has been a blessing for us,” she said, and the work has been a personal blessing for her. “I love cooking. I love prepping food and giving it to people. I think the best times is when you are around people eating.”

Not everyone who participates in one of St. Isidore’s communities comes to nurture a relationship with God, Steele said. When the food truck stops at the laundromat, some visitors pick up food and simply go home. That’s fine, too.

“The goal is to bring about the kingdom of God,” Steele said. “And then I think that, of course, at the end of the day, we are called to feed people that are hungry and give them food. People are thirsty, we want to give them drink.”