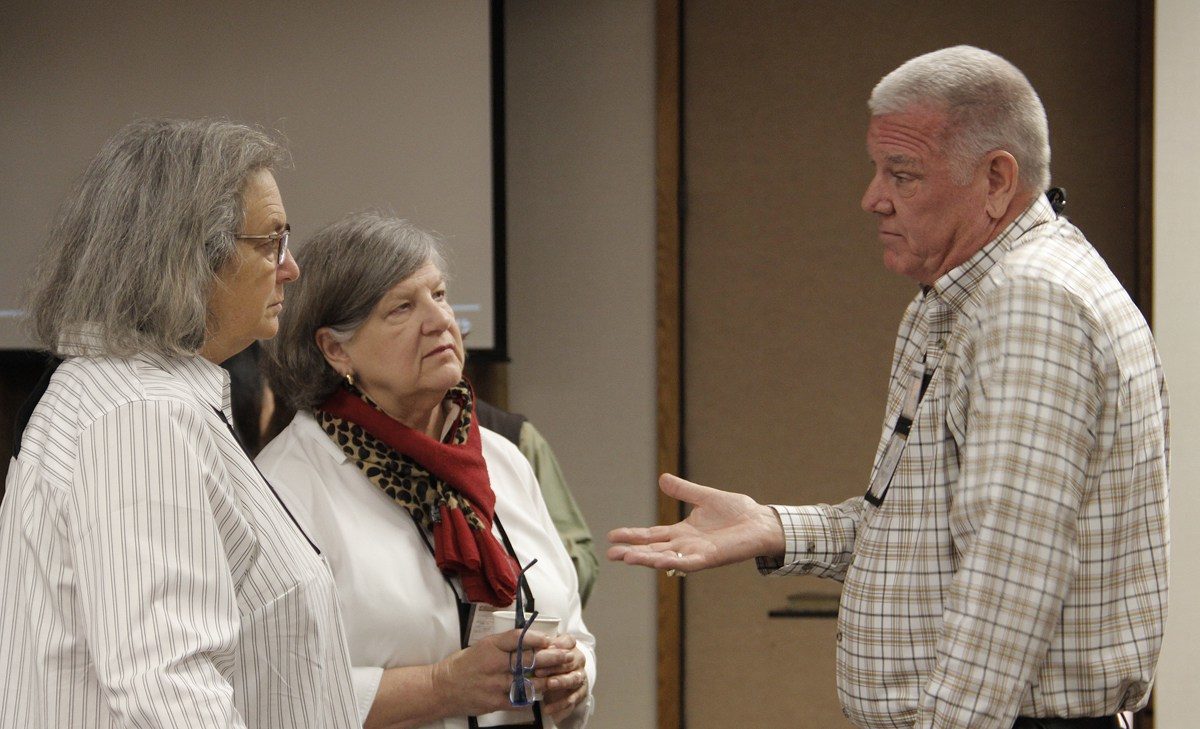 [Episcopal News Service – Linthicum Heights, Maryland] The Episcopal Church’s Executive Council came face to face with the realities of the 2019-21 triennial budget during its fall meeting and pledged to share the burden of eventually bringing a balanced budget to 2018 meeting of General Convention.

There is an $8 million deficit in the current “working draft” of a budget which will eventually need the approval of the 2018 meeting of General Convention, the Rev. Mally Lloyd, a member of council’s Joint Standing Committee on Finances for Mission told the council. The gap between anticipated revenue and the spending asked for by the churchwide staff and council’s joint standing committees stood at just more than $12 million when FFM began its work at this meeting.

The gap comes even as anticipated income is nearly $3.7 million higher than that expected in the 2016-18 triennial budget. Major sources of income include dioceses, an investment income draw, income from renting out space in the Church Center in Manhattan and a planned “annual appeal” beginning in 2018.

Lloyd led the council through the working draft, answered questions and heard pleas from some members to restore cuts already made. She acknowledged that council members all have line items that “are close to your heart” but she urged them to “think about the ministry of the whole and the work of the whole.”

“We’re trying to juggle and balance all these different areas to make one whole reflection of the values, the theology and the love of the Episcopal Church,” she said.

The budget is based on an anticipated $128.7 million in revenue, including $86.7 million in mandatory assessment payments of 15 percent of dioceses’ annual income. However, the current draft anticipates that some dioceses will get full or partial waivers of those payments, up to a “maximum possible” $6.8 million, according to Lloyd. The diocesan payments amount also assumes  .5 percent growth in those dioceses’ annual operating income. Thus, the likely diocesan contribution is pegged at $79.9 million.

At the 2015 meeting of General Convention, bishops and deputies made the current voluntary diocesan budgetary asking system mandatory for the 2019-21 budget cycle, effective Jan. 1, 2019. Without getting a waiver, a diocese that does not pay the full assessment will be unable to get grants or loans from the Domestic and Foreign Missionary Society.

Lloyd said additional income could be gleaned by increasing the percentage amount assessed to dioceses from the anticipated 15 percent to 16 percent. A 1 percent hike would bring in an additional roughly $5.8 million, she said. The council could press to have more dioceses pay the full assessment, regardless of the amount, she added.

The working draft also includes a $4.6 million contingency fund, which General Convention’s  Joint Standing Committee on Program, Budget and Finance (PB&F) requested to help it deal with unexpected convention resolutions that request funding. As much as $1.5 million of that fund could go toward the costs of convention’s possible decision to begin to revise the Book of Common Prayer. Lloyd said the contingency fund could be reduced.

She warned that the budget could not count on drawing money from the church’s short-term reserves, which she termed “dangerously low” at $2.3 million. That fund ought to have $9.5 million, Lloyd said.

The Rev. Susan Brown Snook, chair of council’s Joint Standing Committee on Local Ministry and Mission, told council that money for evangelism would be cut by 41 percent in this version of the budget. At the same time, the presiding bishop’s office budget would increase by 49 percent and governance costs would go up by 39 percent, she said.

Snook sponsored Resolution D005 at General Convention in 2015 to set up a church-planting network and fellow council member, the Rev. Frank Logue convinced that same meeting of convention to add $2.8 million to the 2016-2018 budget for evangelism work.

That latter allocation was funded from an additional .6 percent draw on investment income, making the current draw 5.67 percent. The church’s investment committee has asked that the next budget use a 4.5 percent draw, a request that Lloyd said FFM decided it could not honor without creating an even bigger deficit. The current working draft sets the draw at 5 percent.

In the working draft, money for evangelism would go from the $5.9 million allocated in the 2016-18 budget to $3.5 million. Money for racial justice and reconciliation would remain roughly the same at $9.4 million and the creation care budget would go from $650,000 to $740,000.

Evangelism efforts account for 2.6 percent of total expenses and cost for the church’s stated three current priorities of evangelism, racial justice and reconciliation and creation care account for less than 10 percent of the budget, Snook said.

The Very Rev. Brian Baker, a FFM member, argued that the church’s recent effort to plant new churches is working. “This is the first time in my 27 years as a priest that the Episcopal Church is finally doing evangelism. We are planting new churches,” he said, noting that more than 50 new ministries had recently been started. “We got this seed money of a few million dollars to see if we could do it and we’re doing it.”

The church planting efforts approved by the 2015 convention are “one of the solutions to the dire statistics that we’re always faced with,” Baker said. “I’m asking all of the other committees to look at your budgets and see how can we support this piece of what the Episcopal Church has been trying to solve for so long.”

Council then met in executive session to discuss the draft for nearly an hour.

“That executive session was really important, helpful, forward-thinking, a positive, honest conversation that can help us move forward,” Presiding Bishop Michael Curry said when council reconvened. “We’ve got decisions to make but we are going to make good decisions and we’re going to make them together. This council made a commitment that we’re all in this together.”

Curry said he told council members during their closed session that Jesus fed the 5,000 because “they all worked together and everybody ate, and that’s the attitude [with which] we’re going into this budget.”

He stressed that the current version is an unfinished working document. “So, when it goes out there, you almost have to label it: ‘This is the innards of the sausage,’ ” he said. 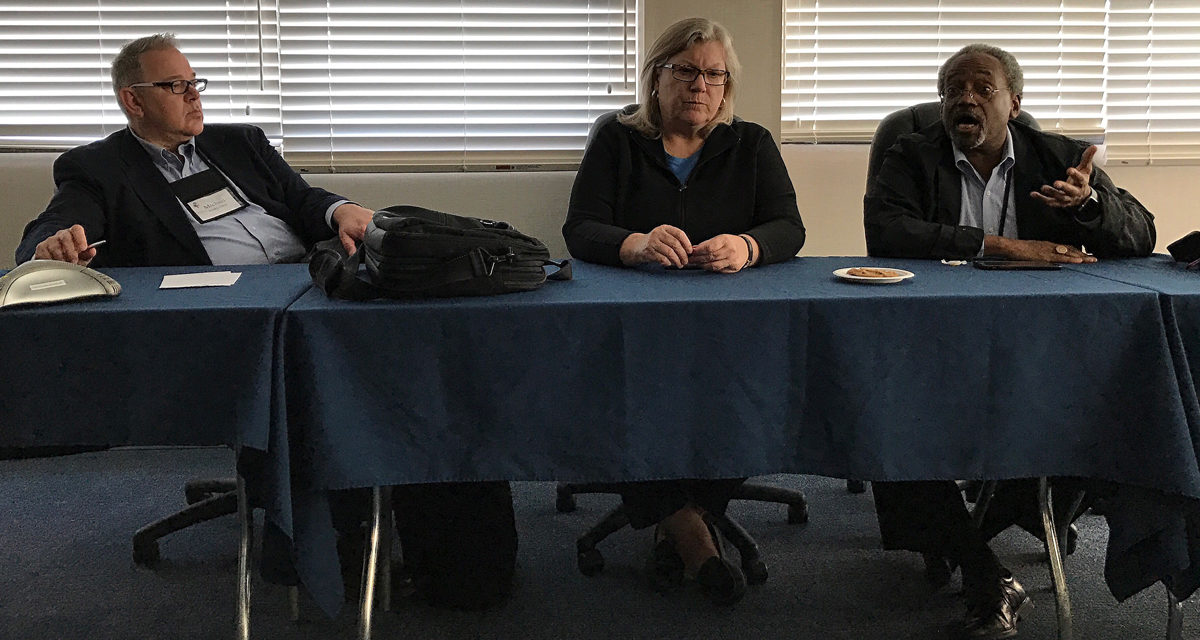 Curry noted during a news conference after the meeting ended that FFM had already managed to add back about $300,000 into evangelism programs, acknowledging that the move “doesn’t get it up to the previous level.” He also said that there is more evangelism work funded in the budget “than what is just technically there under evangelism” line items.

The Rev. Gay Clark Jennings, president of the House of Deputies and Executive Council vice chair, noted that the current version of the budget adds $800,000 to the presiding bishop office budget for the bishop of the Navajoland Area Mission to relieve that person of some fund-raising obligations and so that more attention can be paid to building up the church in that area.

General Convention Executive Officer the Rev. Michael Barlowe suggested that a move council took on Oct. 21, while not slotted into the 2019-21 budget, was an example of the council’s investment in evangelism.

Council agreed to aid the Episcopal Diocese of San Joaquin by forgiving $6.8 million in loans and accrued interest. In return, the diocese will pay the DFMS $1 million by the end of the year; fund the cost of remaining property litigation along with all costs of repair, lease termination and maintenance of recovered properties, including the costs of selling any of them; and fully pay the costs of having a bishop. The diocese also agreed to begin paying its full assessment in 2019.

It has been nearly 10 years since the then-leaders of Central California Valley diocese voted to disaffiliate with the Episcopal Church over the ordination of women and gay clergy and issues of biblical authority. Barlowe said the church first tried to reconcile with the people who left and later turned to litigation to recover church property.

Council member Russ Randle, while earlier presenting the loan forgiveness resolution, said Episcopalians “faithfully persevered” through what turned out to be nearly a decade of eventually successful property litigation. There are now 25 properties that will be sold and 21 “viable” congregations, he said, but the latter are struggling financially. There are two paid full-time clergy in the diocese, along with retired clergy and clergy who work full-time but earn part-time salaries. Randle called the loan forgiveness a “significant investment in this diocese.”

As Curry and FFM members stressed, the budget is far from final. PB&F convened on the evening of Oct. 21 at the Maritime Institute Conference Center, where council has been meeting, to discuss the working draft and the budget process.

Soon after PB&F’s meeting concludes on Oct. 23, FFM will release the working draft budget to the church along with a narrative to explain its assumptions and construction. It will be posted on the General Convention Office’s website.

FFM will revise the budget based on comments from council members, PB&F and the wider church, and have a final draft budget ready for council’s consideration during its Jan. 22-24, 2018 meeting.

PB&F uses the draft budget and any legislation passed by or being considered by General Convention to create a final budget proposal. That budget must be presented to a joint session of the houses of Bishops and Deputies no later than the third day before convention’s scheduled adjournment. According to the draft convention schedule, that presentation is set to take place at 10:30 p.m. CDT on July 11. 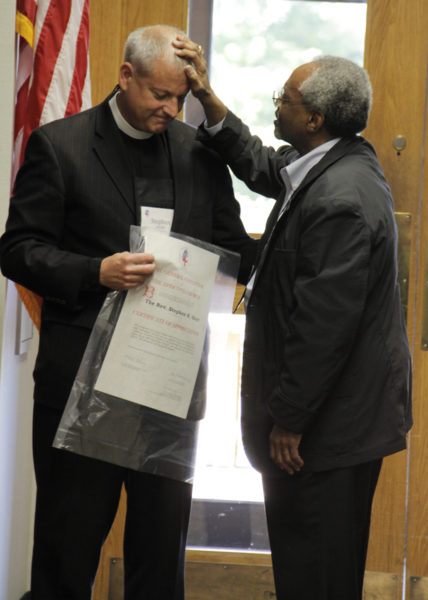 Presiding Bishop Michael Curry blesses Pastor Stephen Herr during what was his last Executive Council meeting as the representative from the Evangelical Lutheran Church in America. Herr had just received a certificate of appreciation from the General Convention. Photo: Mary Frances Schjonberg/Episcopal News Service

The two houses then debate and vote on the budget separately. Both houses must approve the same version of the budget, which takes effect at the beginning of 2019.

Executive Council crafts annual budgets out of the spending plan that General Convention passes as the triennial budget. Typically, council adjusts each of the three annual budgets based on changing income and expenses. Council did just that on Oct. 21, adjusting the 2018 part of the 2016-2018 triennial budget to reflect an increase in expenses of about $3 million and increased income of about the same amount.

A summary of resolutions council passed at this meeting is here.