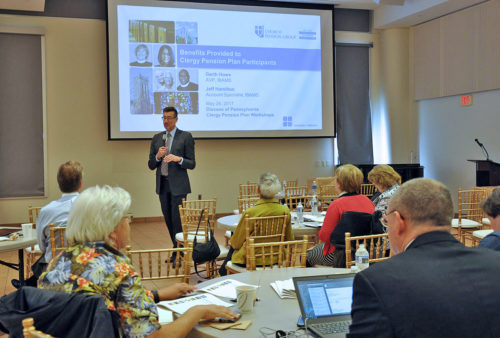 [Episcopal News Service] The biggest changes to the Church Pension Fund in the past 60-some years are due to go into effect next year. They are designed to better serve a changing Episcopal Church and its clergy and lay employees while sustaining the fund and maintaining the value of retirement benefits.

That’s the message Church Pension Group officials are taking to every diocese to explain the breadth and depth of the changes that are expected to go into effect Jan. 1, 2018. (The pension fund is one of five companies that make up CPG).

The plans are being revised, according to Mary Kate Wold, pension fund chief executive officer and president, to “create more modern plans that address the realities of a changing Episcopal Church, while ensuring that each pension plan remains financially sustainable.” Those realities include providing for emerging, non-traditional types of ministry, as well as the changing needs of interim ministers, bi-vocational priests, part-time clergy, and clergy who experience longer breaks in service.

Moreover, Garth Howe, a CPG assistant vice president in its Integrated Benefits Account Management Services office, told one of two gatherings in the Diocese of Pennsylvania May 24, the changes will provide more flexibility for clerics, promote consistency across the plans, simplify communication about the plans, and improve their administration while maintaining the overall value of the benefits.

Two important aspects of the clergy plan will not change. It will remain a defined-benefit plan and the mandatory assessment a cleric’s employer pays will remain at 18 percent. However, the formula for calculating that percentage will be simplified and the timeframe for paying the assessment will change.

“We knew we had to react and adjust to the changing Church,” Howe said, explaining that CPG staffers spent three and a half years traveling around the Church to hear from more than 1,500 Episcopalians how the pension fund ought to react to such change. Some of the suggested changes that emerged were incorporated into the revisions, he said. Some tweaking of the revisions still may occur as CPG staff members listen to feedback during the diocesan sessions.

As CPG was listening to the Church and discussing possible revisions, General Convention in 2015, via Resolution A177, approved the effort. In Resolution A181, it also told CPG to study compensation and the cost of benefits for clergy and lay employees in the dioceses of Province IX, the Diocese of Haiti, the Episcopal Church in Cuba, and with its covenant partners. The Church’s canons authorize the pension fund to provide retirement and disability benefits to eligible clergy. The fund is celebrating its 100th anniversary this year. 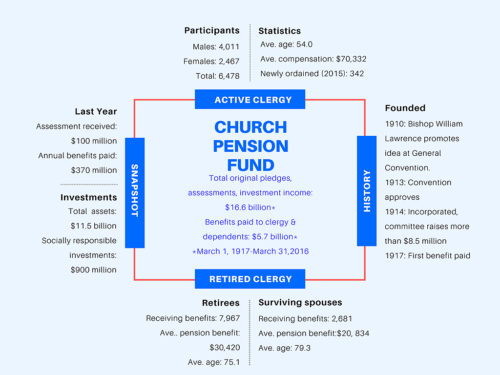 The revisions represent a deep dive into the intricate mechanics of the pension plans. Many are interconnected. Below is a summary of some of the larger changes, followed by links to additional information and schedules of CPG presentations on the revisions.

Eligibility for the clergy pension plan

Currently, participation in the plan is mandatory if a cleric works three or more consecutive months and is paid at least $200 per month. The revision will make participation mandatory regardless of pay level for ordained clergy who meet eligibility criteria. It will also require a cleric be “regularly employed” by the same Church employer for five or more consecutive months. The change, says CPG, will provide flexibility for short-term service and give lower-paid clergy access to the plan.

More information, including the “regularly employed” definition, is here.

Total Assessable Compensation, upon which employers pay an 18 percent assessment, is currently the sum of cash salary, other cash compensation (e.g., bonus, overtime, employer-paid tuition for dependents, employer contributions to retirement saving plans, and other taxable income), Social Security tax reimbursements, utilities allowance, housing (depending upon how it is provided) and, in certain cases, severance. The calculation will be simplified to include most items reported on a Form W-2 (or equivalent), as well as any cash housing allowance and the value of employer-provided housing. The change in the treatment of housing will allow clergy whose only compensation is employer-provided housing access not only to the Clergy Pension Plan but also to the other pension fund benefits. That change might impact the budgets of those congregations that provide their clergy with housing but not salary because they are currently not required to pay an assessment.

Credited Service is an important key component of a cleric’s pension benefit calculation and is also important for determining eligibility for other benefits, such as the fund’s life insurance benefit and the Medicare Supplement Health Plan (MSHP) subsidy. Currently, clergy receive one full month of Credited Service for one month of work if they earn at least 1/12th of the Hypothetical Minimum Compensation, now set at $18,200 per year. His or her employer must have made timely assessments payments; if those assessments are not fully paid, the Credited Service amount is prorated.

The revision will allow Credited Service for pension and life insurance benefits at any level of compensation if assessments are fully paid for that month. There will be no proration. Clerics will still have to meet the Hypothetical Minimum Compensation ($18,000 for 2018) to earn Credited Service to be eligible for the Medicare Supplement Health Plan subsidy. Also, clergy who have a break in service for any reason may make personal assessment payments for up to 24 months, instead of the current 12 months.

CPG says these and other details of the Credited Service revisions will allow lower-paid clergy and clergy with interrupted service to accrue a more meaningful pension benefit as well as help to maintain their eligibility for other benefits.

A major change involves the Highest Average Compensation (HAC), another important number in the calculation that determines the amount of a person’s retirement benefit.

Currently, the HAC (“hack”), as it is known, is the average of the highest-paid seven out of eight consecutive 12-month periods during which the person has earned “Credited Service.” Such service is earned by being eligible for the pension plan and having his or her employer pay the required assessments. Some people who want to maximize their monthly pension check seek ever-higher paying calls to increase their HAC. The current calculation method, however, may not provide flexibility to those who, for instance, feel called to take a lower-paying job because the mission and ministry of that job appeals to them.

Under the new plan, those seven highest-earning 12-month periods will not have to be consecutive. The new formula will apply to participants who earn what is called Credited Service after the revisions go into effect. If a cleric has already established his or her HAC as of Dec. 31, 2017, and still earns Credited Service after the revisions, the new calculations will never lower that number. 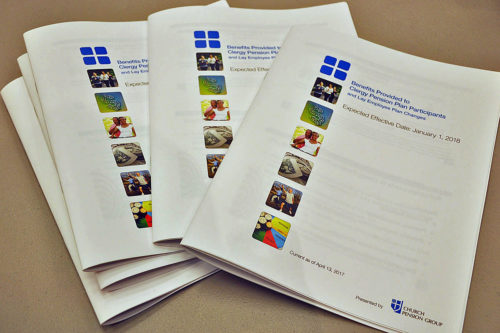 The revisions simplify the eligibility requirements for the resettlement benefit provided to help clergy move when they retire, as well as how the amount is calculated. There will be a new minimum of $2,000 and a maximum of $20,000. More information, including changes regarding eligibility, is here.

The Christmas benefit, or so-called 13th check, will continue and will no longer be subject to the 40 years of service cap. More information is here.

The revision includes a new lump-sum payment provision to any cleric whose retirement benefits have a present value equal to or less than $20,000 at the time of retirement. More information is here.

The fund’s rules about working while pensioned are being revised to offer more flexibility to deploy retired clergy. More information is here.

Details about changes to the clergy plan, including the international plan and retirement benefits, are available via a series of fact sheets here. Many of the individual fact sheets are linked to above.

The calendar of CPG diocesan presentations and webinars is here.

Fact sheets outlining changes to the lay employees’ defined-benefit and defined-contribution plans, along with the Episcopal Church Retirement Savings Plan, are available here. Changes to the lay plans will ensure a consistent definition of compensation and Highest Average Compensation across all plans.