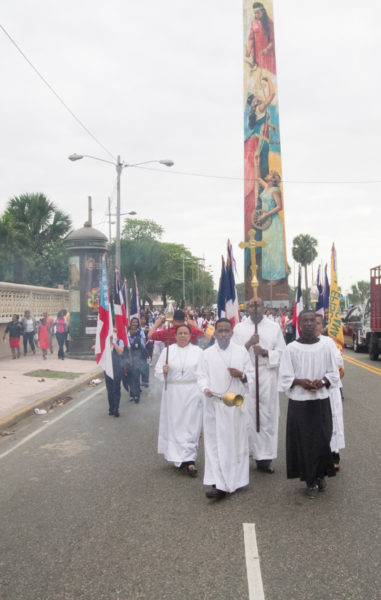 Episcopalians processed from Epiphany Cathedral on Independence Avenue down George Washington Avenue, better known as the “malecón,” to the ministry of culture for the closing Eucharist of the 56 annual Diocese of the Dominican Republic Diocesan Convention. Photo: Julius Ariail

[Episcopal News Service – Santo Domingo, Dominican Republic] As the Diocese of the Dominican Republic continues toward self-sustainability, companion relationships and a growing sense of stewardship will remain a key component in the diocese’s plan for further growth and development.

“It possible to reach self-sufficiency with the help of companion dioceses and the efforts that we put into local stewardship,” said Dominican Republic Bishop Julio Cesar Holguín.

The 2014 budget passed during the diocese’s Feb. 14-16 annual convention included provisions by which each of the diocese’s 55 missions would take on a larger share of their own operating costs and percentage of clergy salaries paid. The convention’s theme was taken from John 15:16, “We are called to bear lasting fruit.”

During his address to the convention, during which Holguín officially called for the election of a coadjutor, he said that the diocese had been working hard to ensure its financial self-sustainability. It has had support, he said, on several fronts:

The subsidy, however, will not continue forever and Episcopal Church’s Province IX dioceses spread across the Caribbean and Central and northern South America have begun to implement strategies for financial independence from the Episcopal Church’s historic block grant program, which in the current triennium allocates $2.9 million for Province IX. 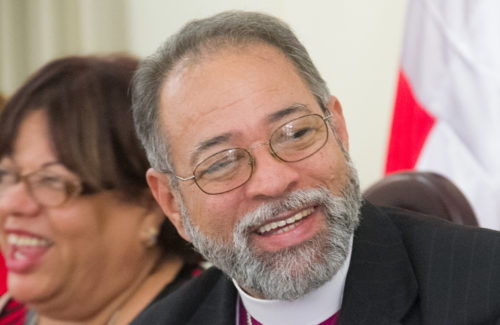 Recently, on the recommendation of the Second Mark of Mission working group, a group convened by the staff of the Domestic and Foreign Missionary Society, the Episcopal Church’s Executive Council during its Feb. 5-7 meeting in Maryland agreed to an 18-year plan for “self-sufficiency,” in support of sustainable mission and ministry in Province IX, which includes the Dominican Republic.

“This is coming out of a need for Province IX that the leaders of those dioceses came to themselves,” said Sam McDonald, deputy chief operating officer and director of mission for the Episcopal Church.

“We are trying to move into a spiritually healthier relationship built on mutuality and not dependency.”

Beginning with the three dioceses closest to achieving self-sufficiency – the Dominican Republic, Honduras and Colombia – the plan calls for each diocese to receive an infusion of funds based on a strategic plan for self-sustainability. As they become sustainable, they are to commit to working with the province’s other dioceses to help them achieve the same goal.

The other four Province IX dioceses are: Ecuador Central, Ecuador Litoral, Venezuela and Puerto Rico. The Diocese of Puerto Rico is self-sustainable. The triennial budget also included an additional $1 million for Province IX with the goal of “strengthening the province for sustainable mission.” This money will be made available to the dioceses to further their progress toward self-sustainability.

The next step is for the Dominican Republic and Honduras to submit proposals outlining how the money will be used to promote self-sustainability, said Martha Gardner, chair of Executive Council’s Joint Standing Committee on World Mission, in a Feb. 13 telephone interview with ENS. 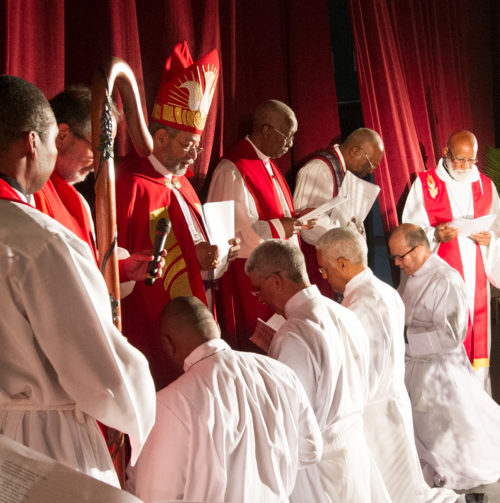 The Dominican Republic is a case in point.  Over the past 20 years the number of companion relationships has grown from four to 15; over the past 15 years, the diocese has grown to include more than 11,000 Episcopalians, 55 churches and more than 30 schools and institutions. The diocese has a $1.1 million annual budget.

In 1998, the Dominican Development Group was formed with the primary goal of seeking the “human, material and financial resources that are required to maintain the diocese’s rate of growth and to provide the diocese with the ability to maintain ‘quality’ programs.”

In 15 years, the DDG has raised more than $10 million to finance the building of infrastructure, including churches, schools, day-care centers and medical clinics, in the Dominican Republic. It is held up as a model of entrepreneurship across Province IX.

While “self-sustainability” means that the church in the Dominican Republic eventually will no longer be dependent on the block grant program, the DDG will plan an important role in helping it to sustain the growth underway already, said Bill Kunkle, the group’s executive director.

“The goal would be to continue the growth, we wouldn’t want to stagnate,” he said. “That’s where the teams come in in support of the growth, expanding the ministries and partnerships.”

As executive director, Kunkle serves as the diocese’s U.S.-based companion-relationship liaison. Along with Karen Carroll, an Episcopal Church missionary who has served in the Dominican Republic for nine years, he helps to coordinate from 50 to 70 mission teams that travel to the Dominican Republic to help build and maintain church properties, run vacation Bible schools and conduct medical and other missions.

Mission teams often visit the Dominican Republic annually; what can begin as a “colonial” type relationship in which North Americans want to direct projects and initiatives, over time gives way to solid partnerships in which each party benefits. 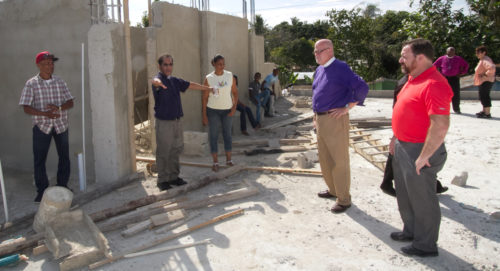 It was the notion of partnership, rather than just sending money to support projects, attracted and has sustained the companion relationship between the Dominican Republic and the Diocese of Eastern Michigan.

“We’ve been in ‘colonial relationships’ and this is something different,” said Eastern Michigan Bishop Todd Ousley, who attended the diocesan convention.

It’s also clear, said Northwest Texas Bishop Scott Mayer, whose diocese also has a companion relationship with the Dominican Republic, that the Episcopal Church’s domestic dioceses could learn a lot from how the diocese plants its missions.

“They plant missions where they see a need, we plant churches where we see a growth track,” he said. 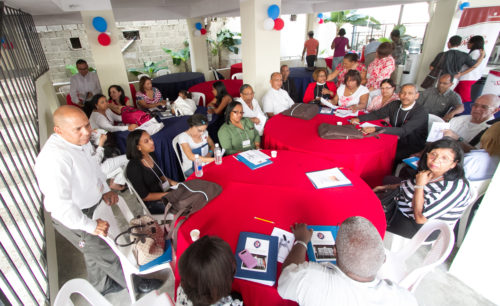 During a July 2013 meeting of lay and ordained leaders of Province IX and church center staff, the consensus was that “the current relationship between the dioceses of Province IX and the rest of the Episcopal Church is influenced by the nature of the historical block grants that establish a relationship of dependency. This is not spiritually healthy, either for the ‘dependent’ or the ‘depended upon,’” according to a document that was released following the meeting.

The document created by the Mark 2 Mission group was born of a longer conversation that began in earnest in March 2011 with a conference in Tela, Honduras.

In March 2012, during a Provincial Synod meeting in the Dominican Republic, the dioceses officially adopted sustainability as a focus. In May 2013, the Global Episcopal Mission Network conference held in Bogotá, Colombia, also focused on self-sustainability.

Each diocese is at a different stage in the process. Even though dioceses of Province IX share a common language, some are well established, some new. The province’s newest diocese, Venezuela, for example, has only officially been a diocese of the Episcopal Church since 2006. The Dominican Republic celebrated 100 years as part of the Episcopal Church, and 116 years of existence, in 2013. Colombia celebrates 50 years this year.

Bishop Victor Scantlebury has served for two-and-a-half years as the provisional bishop in the Diocese of Central Ecuador, which looks very different from the Dominican Republic.

“My job is to rebuild the diocese, and at the same time help them begin building a plan for self-sustainability,” said Scantlebury, adding that his three main areas of focus include helping the church find its identity, retain members and teach stewardship.

“It would seem like we have a long time, but not for me,” Scantlebury. “I’m working vigorously to make clergy and laity aware of the fact that we are in this process, and that soon the Episcopal Church [block grants] will not be there anymore.”

Part of that challenge is, he said, that in Latin America, where the Roman Catholic culture continues to dominate, parishioners typically give an offering to the church during services, but people don’t think of themselves as “stewards,” he said.

In the Dominican Republic, the diocese has already begun to take on the role of stewardship, which also leads to a healthier dynamic within the diocese and encourages priests to develop their own strategies for self-sustainability.

“We have to be creative and think of what we can do,” said the Rev. Vicente Peña, who, for instance, worked with the government to allow the diocese to use the cultural center free of charge for its Sunday worship service to close convention because the cathedral wasn’t large enough to accommodate the more than 1,500 people in attendance.

In its conversations about self-sustainability and the healthier dynamic it would create between the Province IX dioceses and the Episcopal Church, the Mark 2 team acknowledged “the pragmatic reality that there is a potential future of diminishing revenue at a churchwide level to sustain the historical block grants.”

And it said, “It may be that this is a providential convergence of the desire and recognition of the spiritual importance of being free of dependency and the very likely reality that current models are not indefinitely sustainable.”